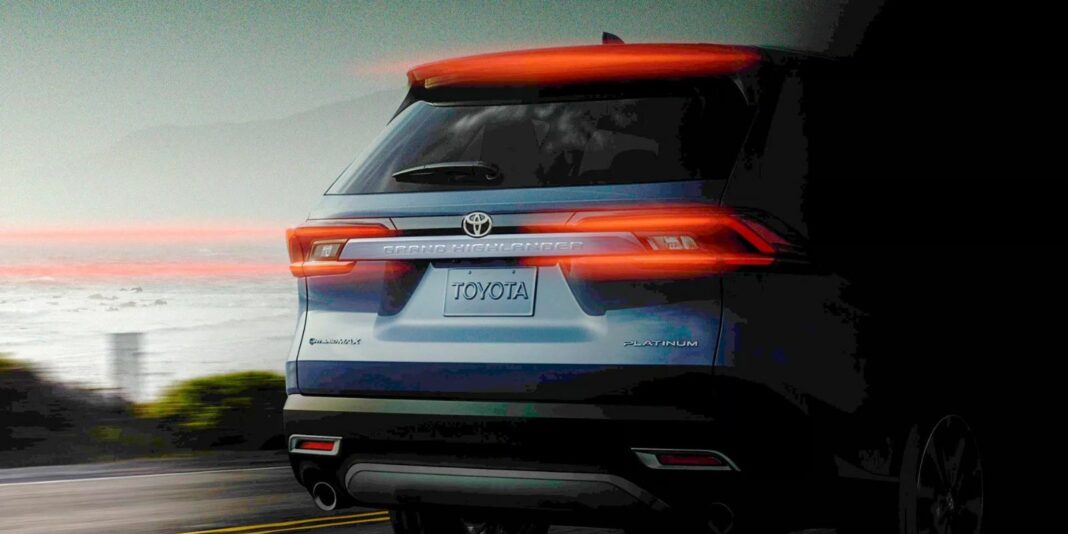 2023 Toyota Grand Highlander will be revealed on February 8, 2023 on the eve of the Chicago Auto Show; will be equipped with a hybrid powertrain

Toyota USA will unveil the all-new Grand Highlander on February 8, 2023 on the eve of the Chicago Auto Show. Ahead of its debut, the Japanese auto major has released a teaser image of the three-row SUV. The Highlander nameplate was first introduced in 2001 and four generations later and over 20 years of sales success, it is getting another big upgrade.

The brand says the 2023 Grand Highlander is equipped for family adventures and it will help in expanding the Highlander nameplate. It is said to be the ‘perfect addition’ to the lineup and it will be positioned between the regular Highlander and the Sequoia. The teaser image shows the presence of C-shaped wraparound LED tail lamps with the GRAND HIGHLANDER name written in the middle.

Other highlights are an upright boot structure, which is brand new to differentiate itself from the Highlander, variant badging and HybridMAX badging. You could also see reflectors on the black bumper with metallic surrounds, a circular tailpipe, a prominent rear skid plate, an integrated spoiler with a high-mounted stop lamp and a shark fin antenna.

The high-spec Platinum variant of the 2023 Toyota Grand Highlander will be packed with features and it will be equipped with a hybrid powertrain. While the official technical specifications are not out, it could use the 2.4-litre four-cylinder turbo engine working in tandem with an electric motor to increase torque and of course better the fuel economy.

The combined system power output stands at 340 hp in the Crown Platinum and 542 Nm of peak torque. The existence of the Grand Highlander came as early as last year when Toyota was found to have trademarked the name. Later, the test mules emerged with bigger proportions and the three-row SUV is expected to be more comfort-oriented than the Sequoia.

A more upmarket version of the Toyota Grand Highlander will emerge in the future as it could spawn a Lexus sibling carrying the TX nameplate.