Jeep has released a new teaser for its upcoming Commander 7-seater SUV, which is slated to debut towards the end of this year

American UV maker Jeep is preparing to debut a new 7-seater SUV later this year. This upcoming model will be based on the Jeep Compass, and will go by the name of ‘Commander’ in International markets. However, in the Indian market, this SUV is expected to be named ‘Meridian’ instead.

Jeep recently released a new teaser video for the Commander SUV in Brazil, giving us a glimpse of its interior. There are a few noticeable similarities with the Compass, including a 10.25-inch fully digital instrument cluster and a 10.1-inch touchscreen infotainment system. The design of the dashboard and steering wheel of the upcoming Jeep Commander is also similar to the Compass.

The Commander also seems to get brown leather upholstery, which looks more premium than that of the Compass. The teaser also shows a panoramic sunroof, 60:40 folding second-row seats, and 50:50 folding third-row seats. We also expect the SUV to offer features like ventilated first-row seats (power-adjustable), a power-operated tailgate (with gesture control), an electronic parking brake, etc.

The upcoming Jeep Commander is expected to get Advanced Driver Assistance Systems, like autonomous emergency braking, blind-spot monitoring, radar-based cruise control, lane keep assist, cross-traffic alert, etc. Also, while the teaser showcases a 7-seater cabin, we expect a 6-seat option to be available as well, which would get captain chairs in the second row.

The Commander is expected to be available with both turbo-petrol and turbo-diesel engine options. The manufacturer hasn’t revealed the specs officially, but speculations suggest that the diesel engine of this upcoming SUV will be the same 2.0-litre unit as the Compass, but tuned to offer more power. Of course, AWD will be offered, but only on the higher trims, while the lower trims will be offered in an FWD configuration. 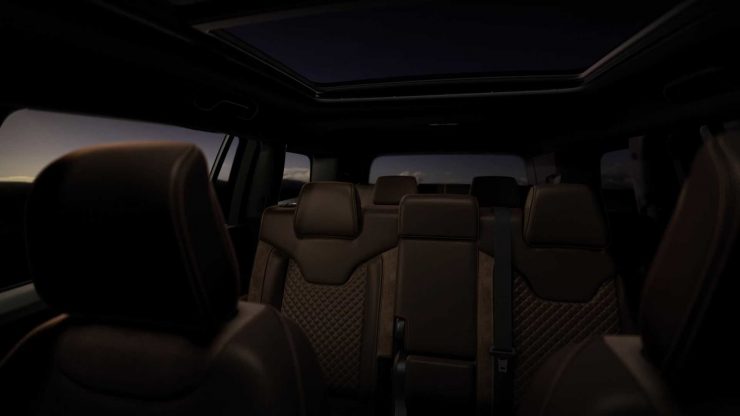 In the Indian market, the upcoming Jeep Commander/Meridian is expected to go on sale in 2022. The SUV will be locally manufactured, in the company’s Ranjangaon facility, to keep the prices competitive. Upon launch, Jeep Meridian will rival the likes of Volkswagen Tiguan Allspace, Toyota Fortuner, Ford Endeavour, MG Gloster, and the upcoming Skoda Kodiaq.