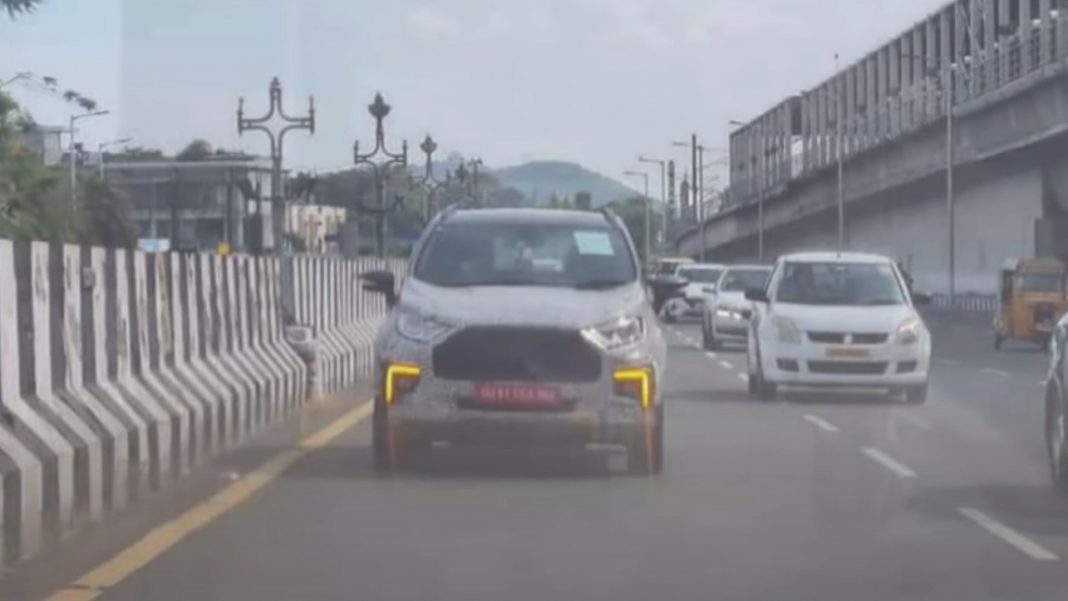 2022 Ford EcoSport is expected to go on sale towards the later stages of this year or early next year; only design changes are expected with feature additions

Ford India has the EcoSport as its best-selling model for a long period of time. The compact SUV did the early benchmark in the segment before Maruti Suzuki Vitara Brezza took over its reign in 2016. The EcoSport received some handful of updates through its lifespan but nothing so significant to transform it into the next generation.

The Blue Oval has decided to give the sub-four-metre SUV another mid-life makeover, judging by the recent set of spy pictures to address the growing competition and the segment has become one of the lucrative acts in the last few years. The facelifted Ford EcoSport has been caught on video giving us more details into the changes and is expected to be launched later this year.

If not, we can expect it to debut sometime in the early stages of 2022. The video shows a redesigned front fascia with a new hexagonal radiator grille assembly and the inserts will also be new. The headlamps are sharper rendering a meaner look and the new inverted L-shaped LED Daytime Running Lights surround the round-shaped fog lamps.

The LED DRLs double up into LED side turn indicators and the newly designed alloy wheels can also be seen. The rear will remain more or less similar to the outgoing model. The 2022 Ford EcoSport will likely have new features added like the latest SYNC 3 tech, and otherwise, most of the equipment will be carried forward including the existing touchscreen infotainment system.

The features list also boasts automatic climate control, a steering wheel with mounted controls, a semi-digital instrument cluster, rain-sensing wiper, an electric sunroof, and so on. Currently, the EcoSport is priced between Rs. 8.20 lakh and Rs. 11.70 lakh (ex-showroom) and do not expect a big change in prices upon the arrival of the updated version.

As for the performance, the 2022 Ford EcoSport could continue with the 1.5-litre naturally-aspirated petrol and the 1.5-litre four-cylinder diesel engines. The former develops 121 bhp maximum power and 149 Nm of peak torque while the latter kicks out 99 bhp and 215 Nm. The existing manual and automatic gearboxes will likely stay put.