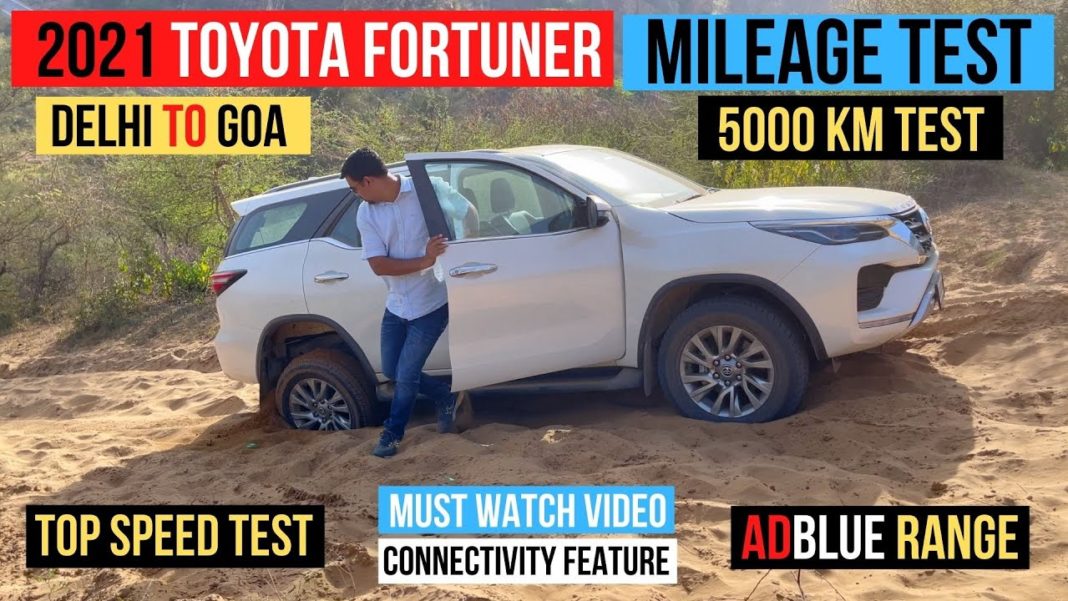 Check out our exclusive fuel economy test of the 2021 Toyota Fortuner diesel (4×4 AT), including the range test of AdBlue

In January 2021, Toyota Kirloskar Motor launched the Fortuner Facelift in India, along with the new top-spec ‘Legender’ variant. The 2021 Fortuner not only offered updated styling but a more powerful diesel engine as well. It is the same 2.8-litre turbo-diesel motor as before but generates a higher output of 203 PS and 500 Nm (420 Nm on MT).

Previously, we brought you plenty of tests of the 2021 Toyota Fortuner, including the moose test (driving stability), acceleration test, and braking test. Now, in our latest exclusive video, we tested the fuel economy of the Fortuner facelift diesel, calculated on a pan-India trip, from Gurugram to Goa and back!

Before the trip, in all the tests mentioned above, the Fortuner guzzled 70.14 litres of diesel and was driven around for 633.2 km. This translates to a fuel economy of 9.02 kmpl, achieved under harsh driving and performance testing. Now, let’s discuss the real-life mileage test, i.e., the above-mentioned trip. From Gurugram to Jaipur, the vehicle consumed 61.74 litres of fuel in 570.8 km, thus delivering 9.24 kmpl. The next fuel stop was taken in Madhya Pradesh after driving for around 705.4 km, in which 71.7 litres of fuel was filled (9.83 kmpl).

From MP to Karnataka, the Fortuner was driven for 822.4 km, and 67.59 litres of fuel was filled, thereby achieving a fuel efficiency of 12.16 kmpl. Finally, after 30 hours on the road, the SUV finally reached Goa. On the return trip, the car was refuelled after leaving Goa in Belgaum, Karnataka. Around 41.40 litres were consumed in a mere 362.3 km (8.75 kmpl), which was due to the hilly roads.

After the trip, the SUV was driven around for another 494 km, and 50.31 litres were filled up (9.79 kmpl). The entire mileage run took a total of 5,658.5 km, which was quite a long test! Also, the AdBlue tank had to be filled up in Gwalior, after 4,500 km, however, that was mainly because of the varying fuel quality in different states. In Delhi NCR, with BS6 diesel, a single tank of AdBlue could potentially last around 8,000 km.