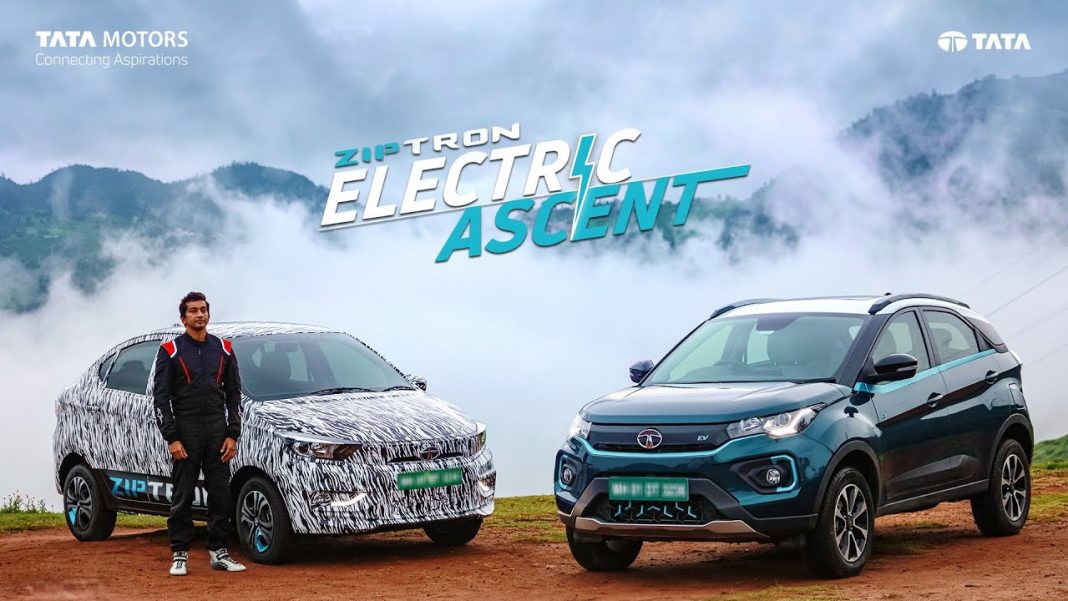 Following the debut of the Tata Xpres-T EV for the taxi market, the brand has now released a teaser video of the updated Tigor EV, which is expected to get higher range capabilities courtesy of the Ziptron technology. In India, the Nexon EV has been the best-selling passenger electric vehicle and spurred by its success, Tata is looking to expand the EV range further.

The teaser video shows the Nexon EV climbing the notorious Kolli Hills with 70 winding bends and corners in Tamil Nadu as the zero-emission SUV was driven by the country’s first F1 driver, Narain Karthikeyan. As he was climbing along the swooping elevation, the camouflaged Tigor EV made its appearance. Tata says it is an all-new EV and as you can clearly see it is the updated Tigor EV.

The Tata Xpres-T EV continues to use the 72 V architecture and 21.5 kWh battery pack but the Ziptron technology will help in pack better performance and higher range. It will also get exterior updates such as blue hues for the wheels and it will boast features such as LED Daytime Running Lights, projector headlamps and new paint schemes could be made available.

The Ziptron-based EVs will get a 300 V permanent magnet synchronous electric motor – more advanced than the 72 V AC induction-type motor on the older model. The Nexon EV is equipped with a 30.2 kWh Li-ion battery pack and the possibilities of the Tigor EV using a similar arrangement do exist. If it turns out to be the case, it could have a higher driving range in a single charge – more than the 213 km offered by the Xpres-T EV.

As Tata previously said that the Ziptron tech will enable a driving range of more than 250 km in its vehicles, the 2021 Tigor EV could get close to 300 km but no official statement has been announced on the exact numbers yet. The peak power and torque figures will also be bumped up by the looks of things and thus it could do zero to 100 kmph quicker than the Xpres-T.

To make matters more attractive, Tata could provide fast charging capability with the upcoming electrified compact sedan and the standard battery warranty could also be class leading. It is expected to be launched in the coming weeks and could enter the market before the speculated arrival of the HBX concept based micro SUV.