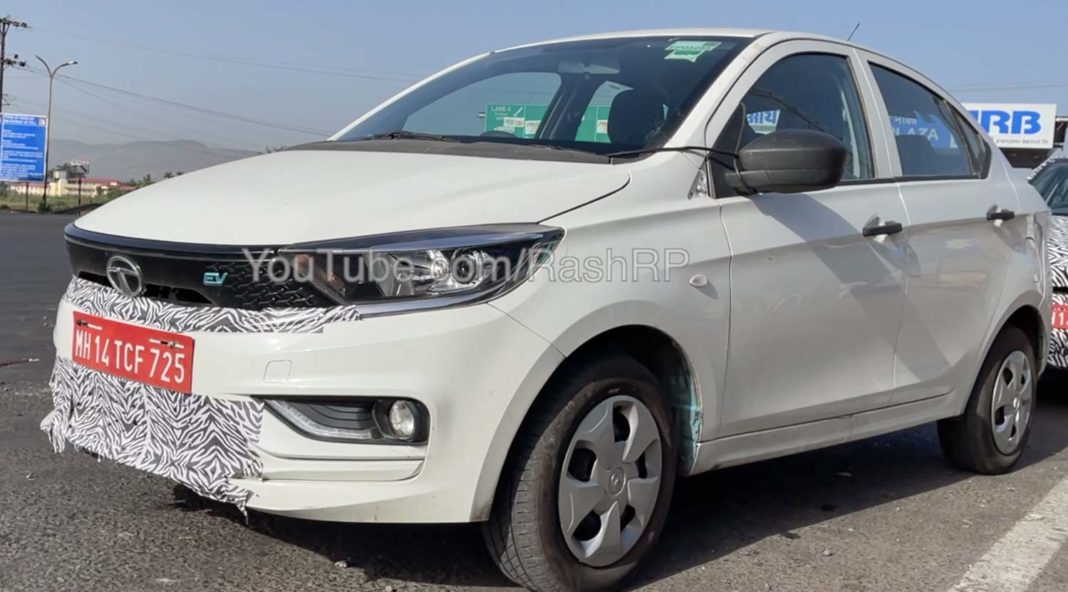 The upcoming Tata Tigor EV facelift will likely retain its powertrain, however, will feature visual enhancements as well as new equipment to attract more buyers

The Tigor EV was launched as Tata Motor’s first electric vehicle which was earlier only supplied to Government officials. However, the manufacturer made it available for personal and commercial use in October 2019. Well, it looks like Tata will soon introduce the 2021 Tata Tigor EV, based on the facelifted ICE Tigor.

Prototypes of the Tata Tigor EV facelift have been spied on test yet again, and this time around, with bare-minimum camouflage. In a video uploaded by ‘The Fat Biker’ on YouTube, two test mules of the facelifted Tigor EV can be seen, one partially covered and the other fully covered in camo.

The update will put the Tigor EV in line with its ICE version, since the pre-facelifted EV looks outdated now. This means that the car’s front fascia will be slightly redesigned, and will now feature projector headlamps as well as a revamped bumper.

While the test mule does feature front fog lamps, the indicators were placed on the fenders and the car came with black plastic door handles and ORVMs. The Tigor EV facelift will also feature the ‘EV’ badging on the front grille as well as the back, along with some blue highlights to let you know that this is not the regular Tigor.

On the inside, the facelifted Tigor EV could get a new three-spoke flat-bottom steering wheel, new upholstery and piano black finish around the floating infotainment system. The features on offer could include a 7-inch touchscreen infotainment system with Apple CarPlay and Android Auto connectivity, a Harman audio system, automatic climate control and so on.

As of now, the pre-facelift Tigor EV comes equipped with a 21.5 kWh battery pack, coupled to an electric motor which produces 40.7 PS of maximum power, along with 105 Nm peak torque. We expect the Tigor EV facelift to retain this powertrain. Tata currently retails the Tigor EV at a starting price of Rs 9.58 lakh, which goes up to Rs 9.90 lakh (both prices, ex-showroom).