Tata Tiago NRG has been spied multiple times during road tests, but there has been no official word about its launch yet

Tata Motors had a strong sales run in the Indian market last year, and the homegrown carmaker’s popularity seems to be steadily rising. This year, Tata Motors has a lot of new models lined up, including the soon-to-launch Tata Gravitas and Altroz turbo, along with the HBX micro-SUV and Altroz EV.

Apart from these, we also expect the manufacturer to launch the updated Tiago NRG in India, sometime during this year. Tiago NRG is the crossover version of the regular Tiago, with a few SUV-inspired design elements. It was discontinued last year, after the launch of the Tiago facelift, and speculations about the launch of Tiago NRG facelift (BS6 version) have been making rounds on the internet ever since.

If you’re wondering what the updated Tiago NRG would look like, you’re in the right place! Here, we have a digital illustration, created by SRK Designs, which imagines the vehicle based on the Tiago facelift. The video below runs us through the entire designing process, from inception to the final product, and is quite an interesting watch.

The video begins with an image of the current Tata Tiago, in ‘Victory Yellow’ paint scheme. The artist then starts by adding black plastic cladding on the wheel arches and at the bottom of the vehicle all around. The front bumper gets a redesign as well, and the car also gets additional silver-finished cladding on the doors. The stock halogen headlamps have been replaced by new LED ones, with integrated LED DRLs.

The car also gets a pair of roof rails, purely for aesthetics, and the Tata logo on the nose is new as well. The artist has also replaced the stock wheels with new ones, which look even cooler. The bright yellow shade is darkened to an orange tan, which suits the vehicle. Overall, this is quite an impressive design, and we hope that the production model looks just as impressive. 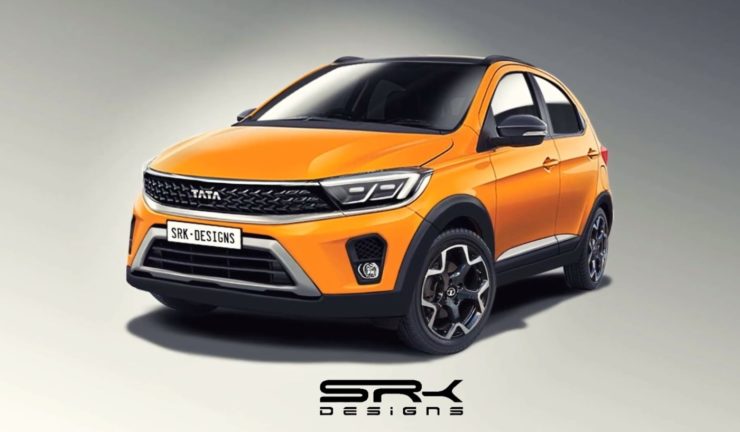 Upon launch, the Tata Tiago NRG will be powered by the same 1.2-litre, naturally aspirated, inline-3 petrol engine as the regular Tiago. This motor can deliver a peak power of 86 PS and a maximum torque of 113 Nm, and can be had with either a 5-speed manual gearbox or a 5-speed AMT.