Modern cars are increasingly equipped with large touchscreen infotainment systems and the trend has been shifting towards have a dual screen setup – one for infotainment and the other for instrumentation that can also be called as driver’s info display or any other fancy phrases manufacturers use with their essential functionalities being the same.

In October 2019, Mahindra & Mahindra and Ford Motor Company signed an agreement to create a joint venture valued at $275 million. Mahindra holds 51 per cent controlling stake while Ford has the remaining 49 per cent stake. It would acquire the automotive business of Ford India and be operationally managed by Mahindra with the governance comprising of representatives from both the brands.

The mutually beneficial alliance allows for developing, marketing and distributing Ford-branded vehicles in India and Mahindra will take advantage of Ford’s expertise in a number of fields as well. Codenamed W605, the next generation Mahindra XUV500 will likely be launched in the early parts of next year and it gives rise to a Ford C-segment SUV that will compete against Tata Harrier and MG Hector. 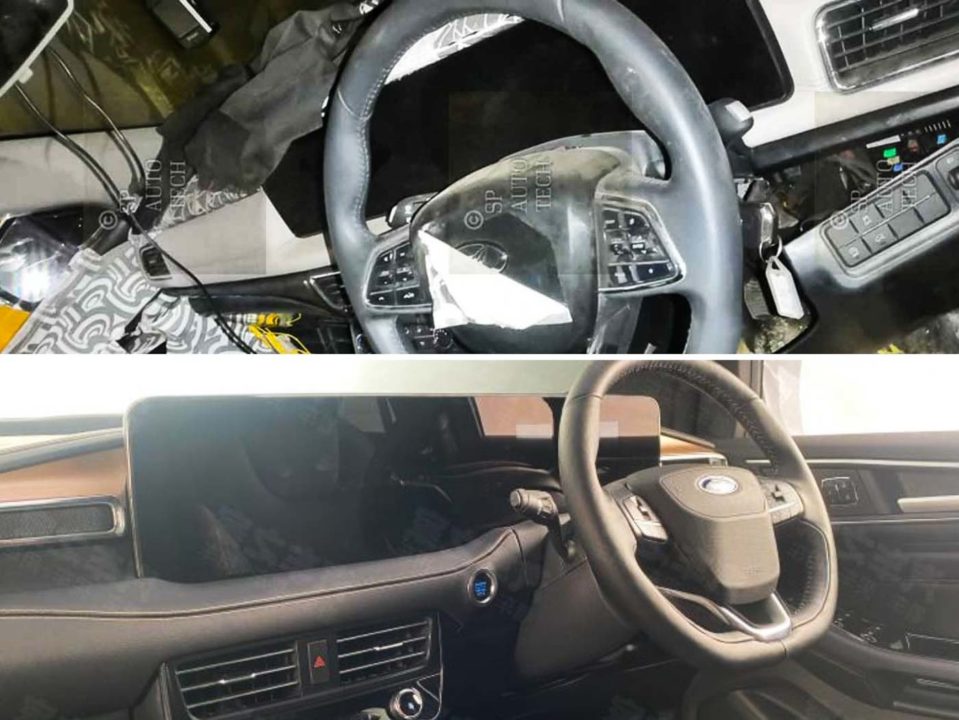 Codenamed CX757, its front fascia was allegedly leaked yesterday and both the premium SUVs are said to be designed by Pininfarina. Interestingly and in a rather uncanny manner, the 2021 Ford Edge for the global markets and the second-gen Mahindra XUV500’s spy pictures show plenty of resemblance inside the cabin as both feature dual horizontally-oriented screens.

In addition, the flat-bottom steering wheel with mounted controls, circular dials for air conditioning and other controls, body-hugging front seats and horizontal AC vents in the centre console can also be seen. We do believe the 2021 Ford Edge could influence the interior of the Ford C-SUV and since it has several commonalities with the next-gen XUV500, the cabin could be more or less identical.

The 2021 Mahindra XUV500 will be powered by the existing 2.2-litre mHawk diesel and a new 2.0-litre mStallion petrol that debuted in the Mahindra Thar. The former develops 180 horsepower while the latter could kick out 190 horsepower and 380 Nm. Both are expected to be paired with a six-speed manual or a six-speed torque converter automatic transmission.