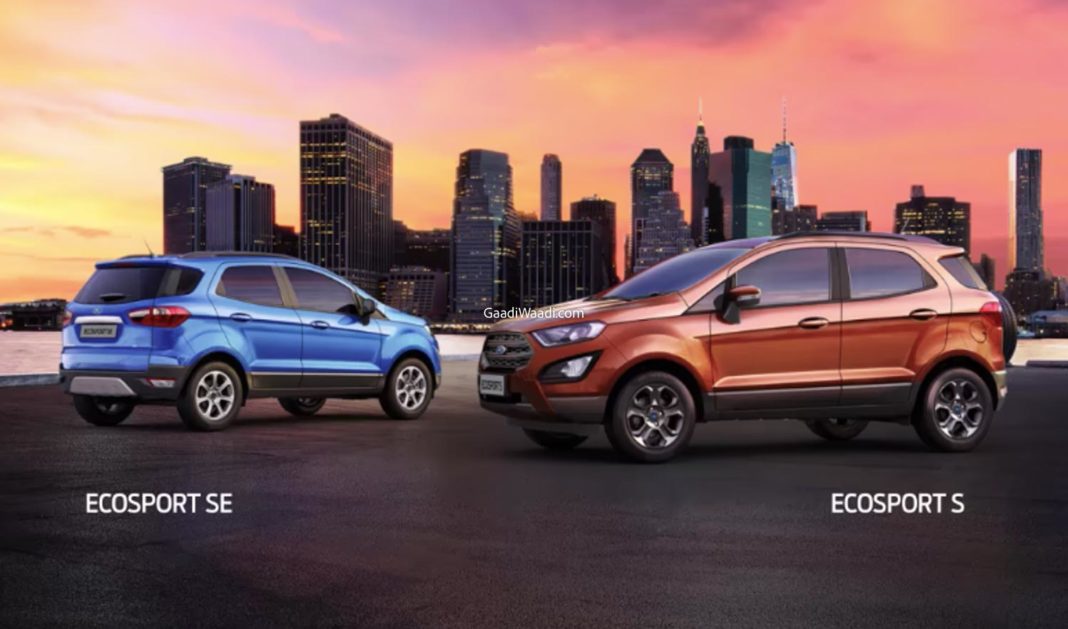 Following the teaser image and undisguised spy shots, Ford India has today announced the launch of the EcoSport SE in the domestic market. Priced from Rs. 10.49 lakh (ex-showroom) for petrol and Rs. 10.99 Lakh for the diesel, the 2021 Ford EcoSport SE helps in expanding the range of the compact SUV and it gets a different rear end identical to what can be seen in the international markets.

The EcoSport set the early benchmark in the sub-four-metre SUV segment but for nearly a decade, only minor changes were introduced to stretch its lifespan as the long due second generation appears to be in the pipeline, only in the near future. It continues to be the best-seller for the Blue Oval in India ahead of Endeavour every month.

The new Ford EcoSport SE is devoid of the signature tailgate-mounted spare wheel and thus bringing it in line with the export-spec SUV. Instead of the spare wheel, it comes with a tyre puncture repair kit and is offered in both petrol and diesel engine choices. The Chennai-made export version of the EcoSport was revealed nearly six years ago.

From July 2020, passenger cars under the M1 class (seating capacity of up to nine including the driver) are not mandated to be sold with a spare wheel by the Ministry of Road Transport and Highways (MoRTH) unless they use technologies like TPMS (Tyre Pressure Monitoring System) and meeting other criteria.

At the rear of the Ford EcoSport SE, you could find the repositioned numberplate which sits at the middle of the tailgate. The tailgate remains to be side-hinged. The SE boasts of similar features as the Titanium trim such as a sunroof and Ford’s SYNC infotainment system but some equipment has been removed to position it below the S.

Other notable features are a rear armrest, a dual-tone rear bumper with silver applique, 16-inch alloy wheels, SYNC 3 infotainment system with Apple CarPlay and Android Auto as well as Ford PassTM integration, which is a one-stop smartphone app meeting ownership needs. With a factory-fitted cloud-connected device, the EcoSport owners can perform operations such as starting, stopping, locking or unlocking remotely, etc.

With no powertrain changes, it comes with a 1.5L three-cylinder TiVCT petrol engine which develops 122 PS of power and 149 Nm of torque. The 1.5L TDCi diesel engine delivers a peak power of 100 PS and peak torque of 215 Nm. Both the engines are paired with a five-speed manual gearbox.