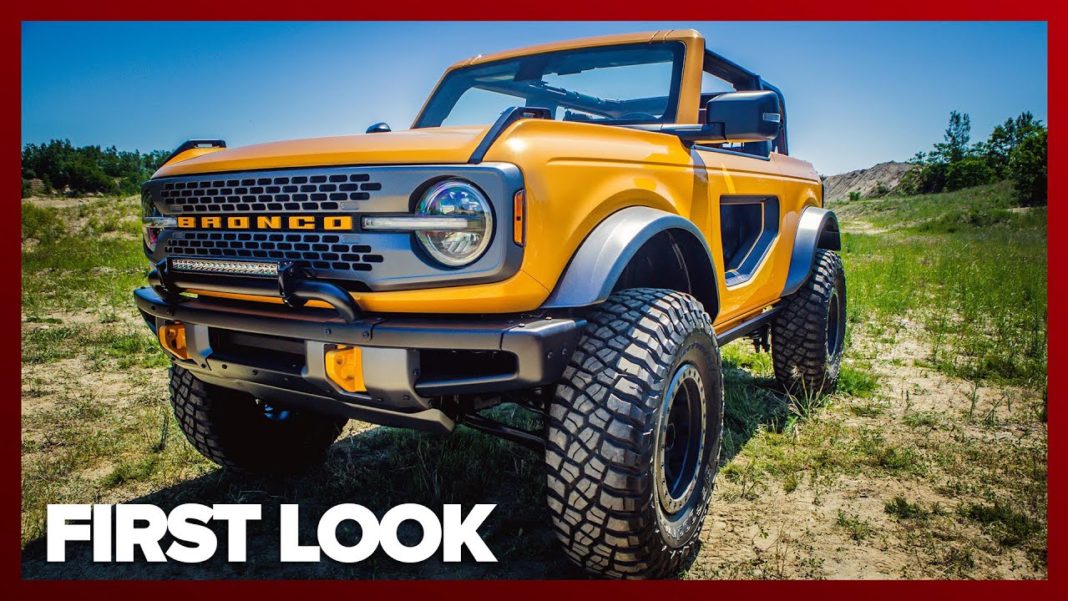 With the unveiling of the new generation Bronco, Ford has undoubtedly resurrected an icon after nearly a quarter of a century and its initial response has been overwhelming. As customers needed to deposit only USD 100 to reserve the model, the booking site has often crashed due to online traffic. While we may never get to see the Bronco in India, here is a walkaround video explaining the interior and exterior of the new off-roader.

To firmly compete against the Jeep Wrangler range, Ford has set all guns blazing with the Bronco as it ha returned in three variants: a two-door for the first time, a four-door and a compact Bronco Sport. Wanting to be the leader of the “rugged utility” segment, Ford has presented the Bronco with new technologies and a whole host of connective and convenience-based features.

For starters, the 2021 Ford Bronco has a class-leading ground clearance of 294 mm and water wading capability of 851 mm with maximum breakover angle at 29 degrees and departure angle at 37.2 degrees. For the first time in the segment, the Bronco comes installed with a massive 35-inch off-roading tyre right out of the factory.

Based on a high strength steel chassis, the two-door and four-door Broncos (Ranger based) have body-on-frame construction while the smaller Bronco Sport has uni-body structure as the Escape. The bigger Broncos are said to have class-leading suspension travel – 17 per cent more travel than closest rivals. The new Bronco range is powered by a 2.3-litre four-pot EcoBoost engine with 279 hp and 420 Nm. 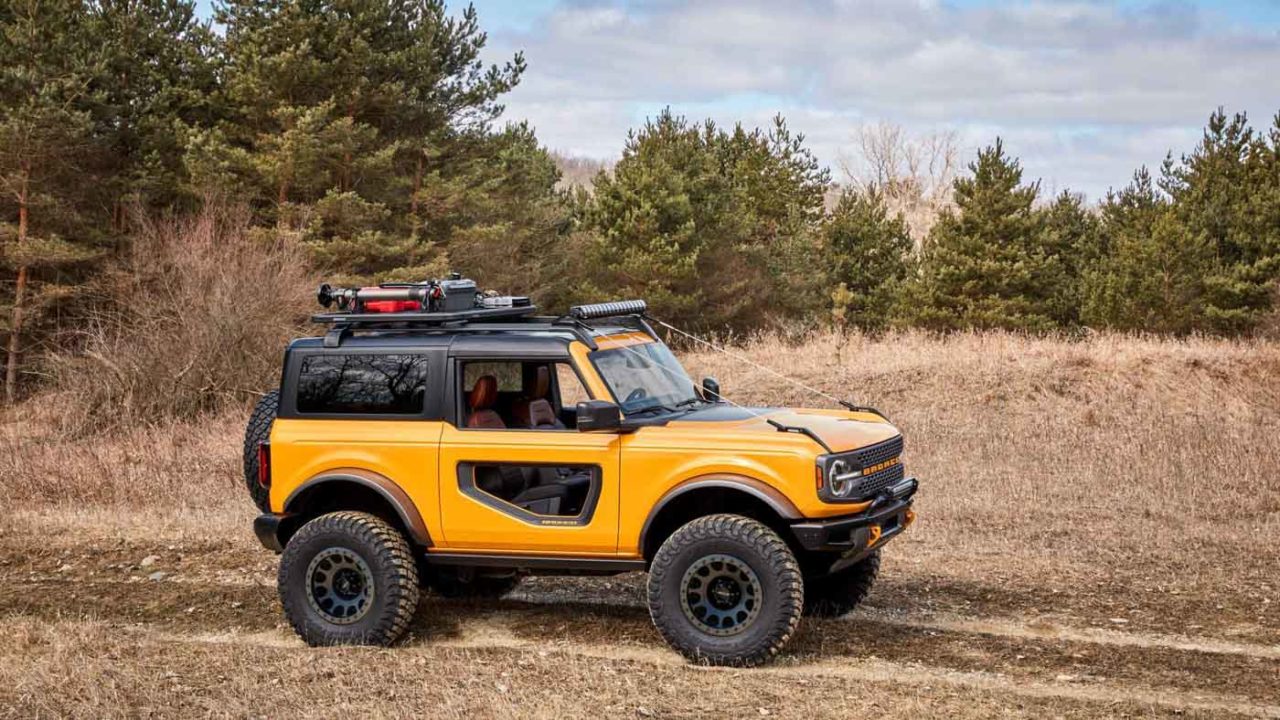 The base two-door version is priced from $28,500 while the four-door costs from $33,200. The Bronco Big Bend is followed by the Black Diamond, Outer Banks, Badlands, Wildtrak, and First Edition variants. The latter is already sold out as the production is limited to only 3,500 units with a slew of off-roading amenities.

It features an exclusive Terrain Management System with seven “GOAT” (Goes Over Any Terrain) modes such as Normal, Eco, Sport, Slippery and Sand with Baja, Mud/Ruts and RockCrawl as well as Trail Toolbox (with Trail Control, Trail Turn Assist, Trail One-Pedal Drive). Up front, there is a full independent suspension with Dana AdvanTEK differential and Dana 44 AdvanTEK solid-axle design with coil springs and five locating links at the rear. 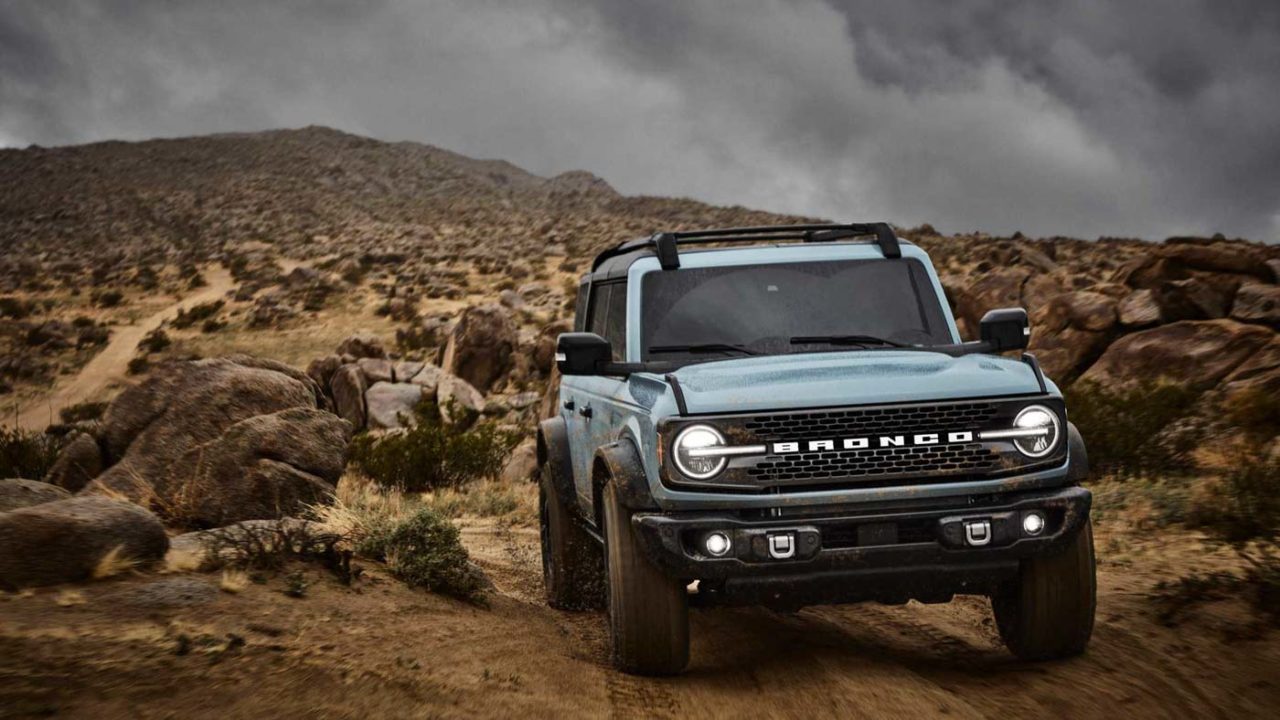 Optionally, customers can choose the Spicer Performa-TRAK locking electronic differentials, semi-active hydraulic stabilizer bar and Bilstein long-travel dampers with end-stop valves and is position sensitive. Besides the room for a wide range of personalisation for seemingly every exterior bit, the 2021 Ford Bronco gets exclusive removable frameless doors and cowl-mounted side mirrors.

The two-door Bronco has easily removable three-section hard top and the four-door is offered with a soft top with four removable sections. The weatherproofed and water-resistant interior is also influenced by the original Bronco just as the exterior. The controls, gauges and grab handle designs are prime examples. A clever rack on the dash can be used for fitting smartphones and action cams.