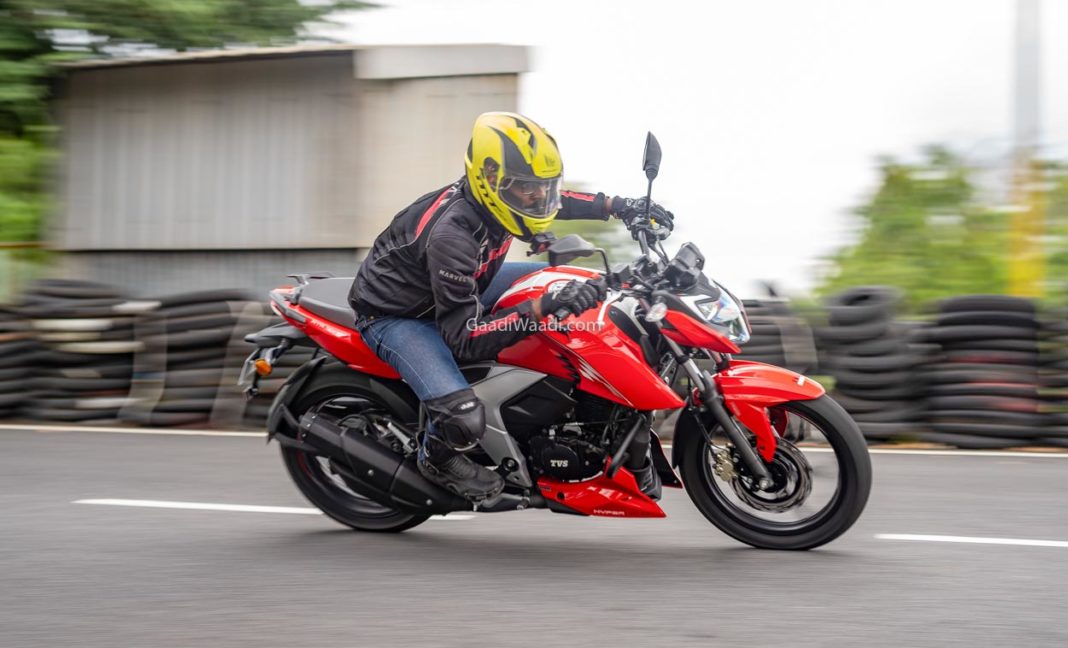 The Apache series has been at the heart of TVS Motor Company’s racing heritage as well as sales volumes since the first model was introduced way back in 2005. Three years later, the first fuel-injected motorcycle, the RTR 160 Fi, came into play and in 2011, the RTR 180 received ABS – both of which were segment-first years before the regulatory mandates came into the act.

Ahead of the BSVI era from April 2020, two-wheeler manufacturers have already had a topsy-turvy tenure with the sales crisis being faced this year. But with just over three and half months remaining in the deadline, the upgraded BSVI bikes and scooters are being rolled out thick and fast, and they offer a clear understanding into how the industry is shaping up.

TVS debuted the BSVI compliant Apache RTR 160 4V and Apache RTR 200 4V towards the end of November and the stringent emission standards have led them to bring in the new generation fuel injection system dubbed RT-Fi. Despite the drop in performance numbers, has it managed to keep the naked streetfighter duo’s essence intact? We went to TVS’ native test track at the Hosur to find out!

I would like to break it down into two parts, one for each Apache RTR 4V to give you a clear idea of their similarities and distinctions. The 2020 TVS Apache RTR 160 4V is a direct descendant of its predecessor the two-valved RTR 160 and it has been on sale since the middle of last year. TVS has taken the opportunity to include subtle design updates that are too easy to miss if you’re not eagle-eyed. 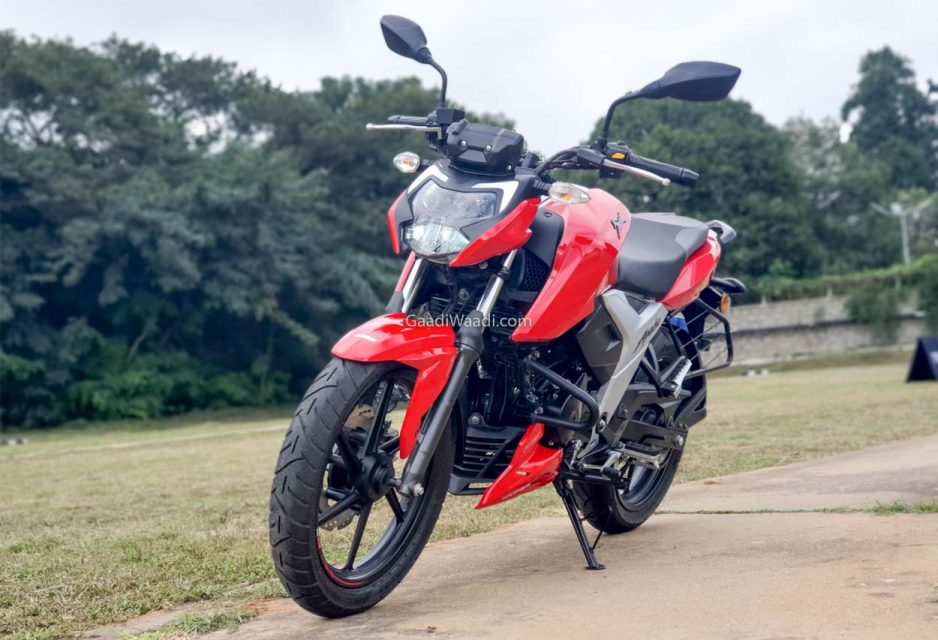 The side extensions of the fuel tank get redesigned chequered flag graphics and it can also be found on the new central strip running across the tank. The major cosmetic updates are the more aggressive LED Daytime Running Lights that are now bigger and positioned outside the new LED headlamp with better illumination and spread.

They render a more upmarket appeal to the 160 4V and most importantly a facelifted stance. The engine is painted in black colour and the belly pan has BSVI sticker on one side and RT-Fi on the other. The restyled claw-shaped mirrors complement the extended headlamp mask and bring edgier appeal to the 160 naked while the single-piece seat is applied with a dual-tone finish. 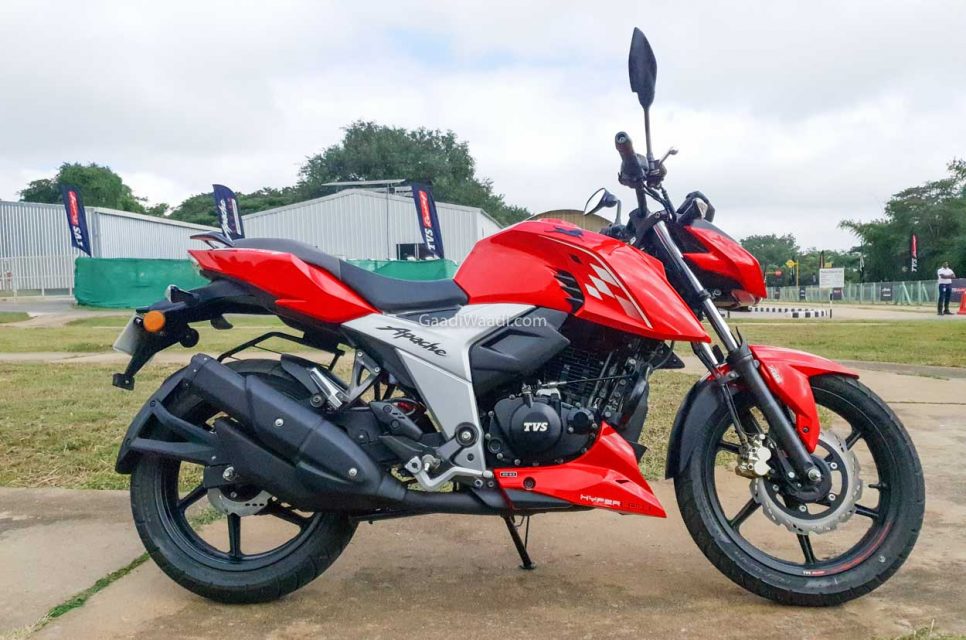 Elsewhere, the design updates are subtle. For instance, there is a new black side panel just atop the engine and the new ‘wave bite’ key is claimed to be safer while plenty of engineering works have gone into making the components to offset the weight increase created by new emission standards. The brand is said to have worked two years to nullify any performance disadvantage the new regs could impact on. 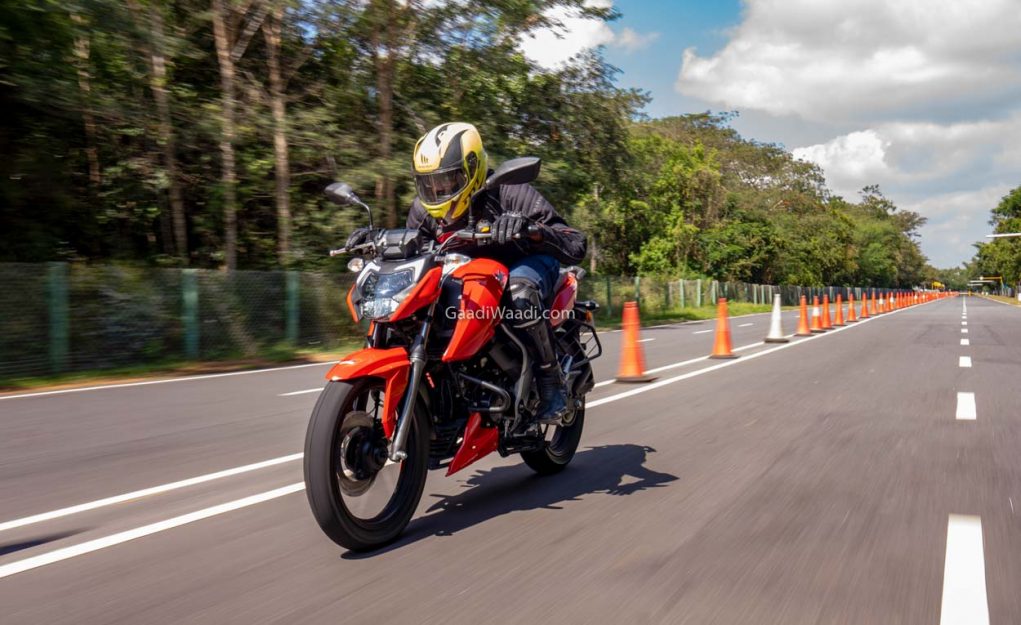 The Hosur-based manufacturer has managed to keep the kerb weight similar at 147 kilograms. The RT-Fi (Race Tuned Fuel Injection) as TVS calls it is the next-generation technology, a significant upgrade on the electronics front. The closed-loop system now has faster control and the asymmetric piston is nanofriks coated with PVD coated rings and more precise combustion control.

Consequently, you could feel the urgency in the throttle and the response at higher speeds is seamless in most cases. The five-speed transmission is immediate in lower gears but sometimes when you aggressively upshift from fourth to fifth you might have to work your leg harder. The lightness of the chassis makes the Apache RTR 160 4V a joy through corners. 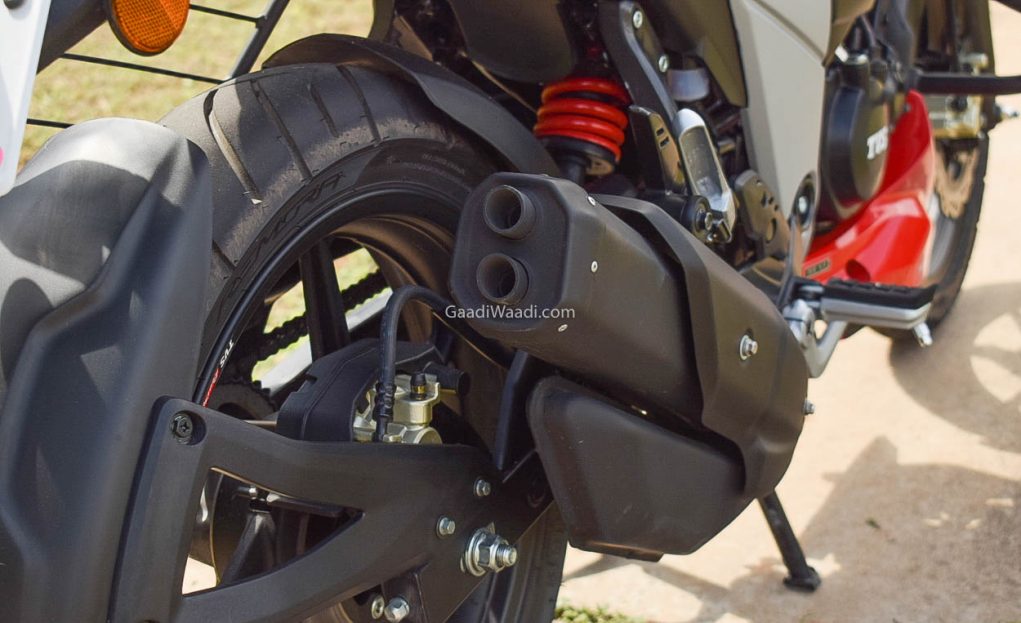 But you would have to really slam on the brakes and shift your body weight backwards on the entry into the loop at the Hosur test track as the front end is very light. The seat felt comfortable throughout my time with the 160 4V and it has new foam material used for longer saddle time of the rider and pillion. The suspension has always been not too softer and stiffer and I was glad to have the characteristic retained.

The fine balance in suspension setup ensures good ride quality for a 160 cc motorcycle and we are eager to test it in real-world conditions as well. The clutch felt a little lighter than the older version and it was to my liking nevertheless and TVS said despite the slight drop in performance, the 0-60 kmph acceleration time remains identical and I certainly would not bet against it. 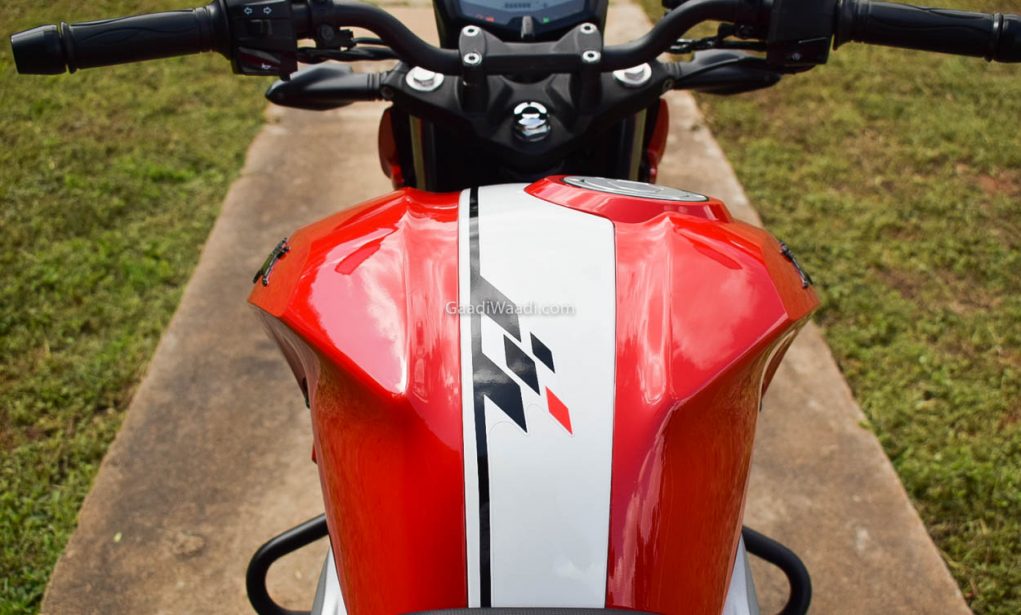 The new 160 4V is offered in red, blue and black colour options as the drum variant is priced at Rs. 99,950 and the disc at Rs. 1.03 lakh (both prices, ex-showroom). The former sees a price increase of around Rs. 8,000 but considering that the engine is fuel-injected as opposed to the carburetted system of the previous model, the price hike is acceptable and convincing.

Meanwhile, the disc version is around Rs. 3,000 more expensive but it gets additional features as mentioned above. The meticulous attention to detail like the aerodynamic body shape channelling air towards the sleek rear package, scarlet coloured engine head and monoshock rear suspension and air intake for engine cooling up front as well as the all-digital instrument cluster compound the use of top quality materials and let alone the fit and finish the 160 4V is already known for. 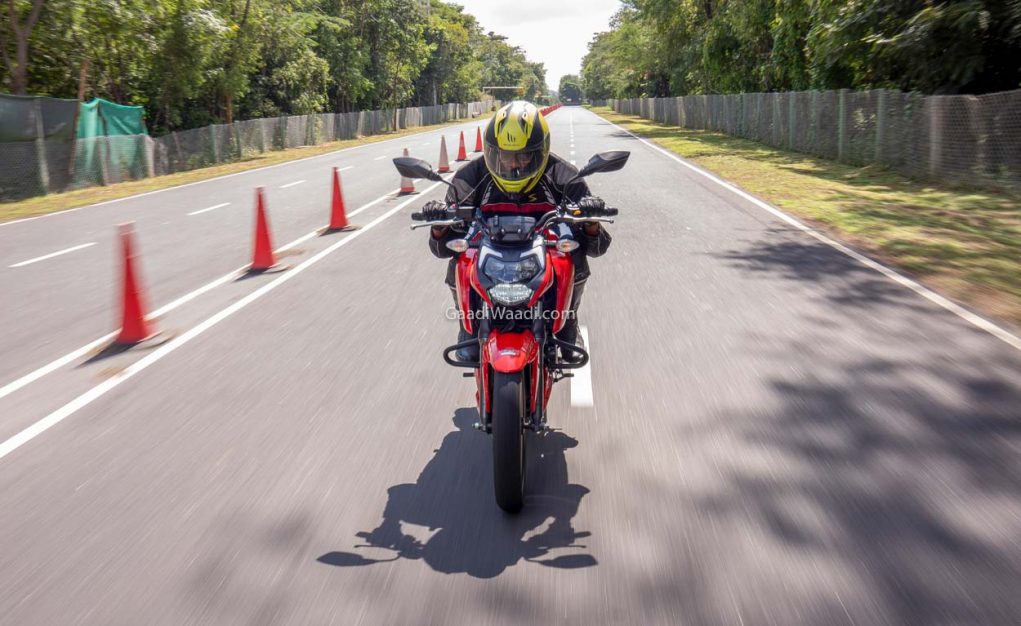 I rode the disc brake version (270 mm front disc and 200 mm rear disc) with a single-channel ABS system and as a whole is tuned towards progressive braking rather than dumping the lever in a hurry and it should ensure longevity. The more I rode the 160 4V the more I wished it had a sixth gear for better top speed and reduced vibrations in the three-digit speed figures but then again the motorcycle is said to cater to the city riding according to TVS but we would have wanted the envelope to be pushed further.

Talking about city riding, TVS has added in GTT (Glide Through Traffic) technology that aids in the motorcycle moving at lower speeds without the effort of the rider in the first, second and third gears. It is an intelligent tech helping in reducing rider’s fatigue and it should have been the one tested outside the bounds of the track and my first impression has been nothing but positive. 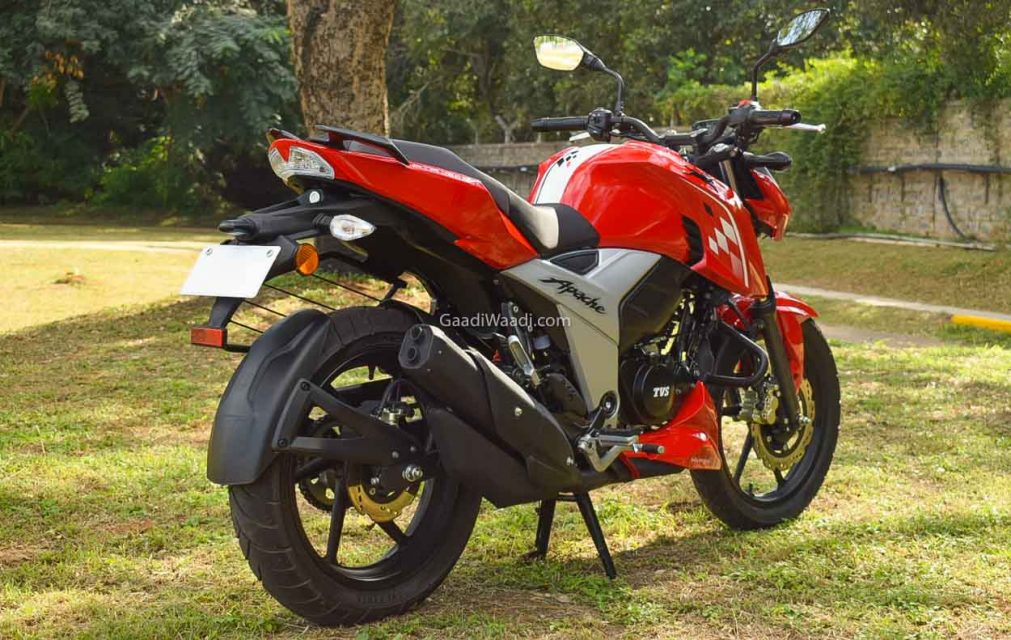 The TVS Romero has good traction out of the corners and it gave me enough confidence into the loop and while exiting the final left-hander. The RTR 160 4V can do in the upwards of 90 kmph in third gear but stressing it harder you would get vibrations on the footpegs and the handlebar. The top speed I managed to hit on track was 119 kmph. The quicker electric start endorsed as ‘feature touch’ does worth a mention as well. The bike does not get Bluetooth connectivity and slipper clutch as it’s a relatively affordable alternative to its bigger sibling. The gear position indicator is a noticeable miss.

Overall, TVS has performed the BSVI transition with perfection in the 2020 Apache RTR 160 4V I would say as the powertrain has retained its sporty essence and the quality of the ride is amongst the best in the segment. The LED DRLs and LED headlamp add to the list of its advantages as it reiterates itself as the feature-packed motorcycle in its space. We believe it has strived upon the switch to BSVI and set the bars up even higher for others to catch up.