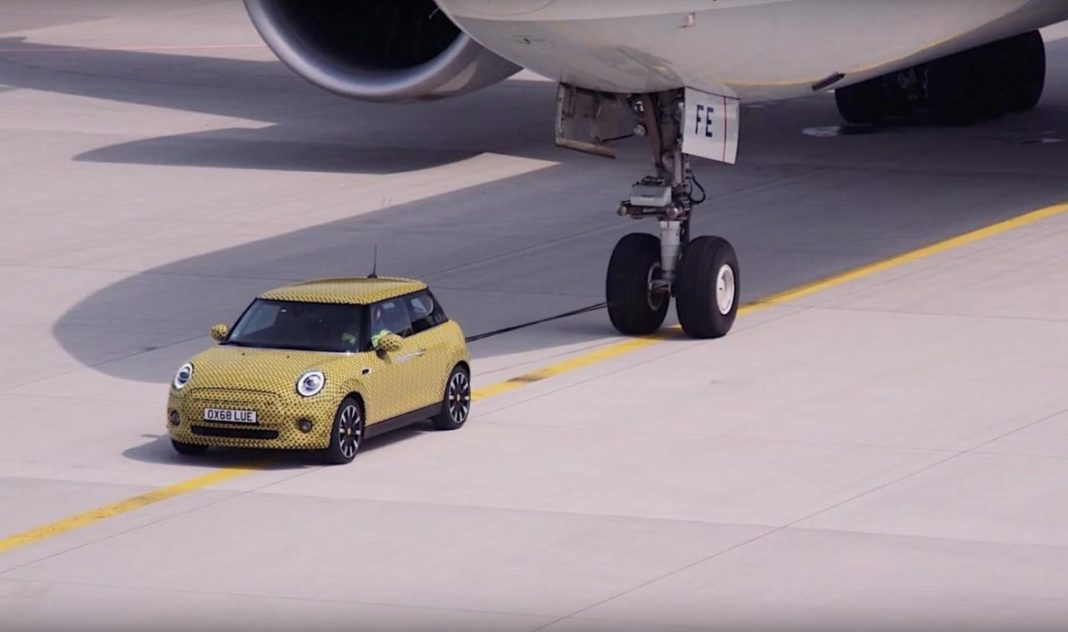 With the electric vehicle game in the full swing, every manufacturer wants to pitch themselves as the green manufacturer. BMW Group’s Mini will do the same with the 2020 Mini Cooper SE Electric hatchback which has been teased recently in a rather unusual video. Mini has a released a video of the upcoming electric hatch pulling a multi tonne Boeing 777F Freight aircraft.

The British carmaker is over with the testing phase of the emissions-free MINI Electric and this will be the company’s first purely electrical car. The promotional video was shot at the Frankfurt airport where the almost production ready prototype of the new model played the role of an aircraft tug.

The MINI Cooper SE towed the unloaded 150 tonnes Boeing 777F freight aircraft with ease and was captured on a 45-second video made in collaboration with BMW Group and Lufthansa Cargo. This is the first video in the series of videos highlighting the exciting and entertaining manner of the upcoming electric hatch in a number of social media videos manner.

The MINI Cooper SE will go into production starting November 2019 at the British plant in Oxford and is based on the iconic 3-door Mini Cooper. This will the second only purely electrical car by BMW Group after the BMW i3. Interestingly, the same long-haul transport aircraft provided the setting for a vehicle showcase – BMW Vision iNEXT World Flight.

BMW will start the serial production vehicle model based on the Vision concept at the BMW Group plant in Dingolfing from 2021 onwards. The future Vision products will showcase the latest BMW Group flagship technology featuring numerous innovations like D-ACES (Design – Automated Driving, Connectivity, Electrification and Services).

As for the electric Mini, the official premiere of the production version will take place at 2019 Frankfurt Motor Show in September, exactly two years after the Mini Electric study was revealed. The company is saying that once this MINI is launched, it will be the world’s first electric hot hatch.