The second-generation Mahindra Thar was launched in India last month, and the company has already green-lit the production of its 5-door version

On 2nd October 2020, Mahindra & Mahindra launched the new-generation Thar SUV in India, at a starting price of Rs. 9.80 lakh (ex-showroom, New Delhi). The SUV has managed to garner over 15,000 bookings already, and due to the high demand, the waiting period for it has shot up to 6 months!

While developing the new Thar, the manufacturer tried to make it as mainstream as possible, while still offering brilliant off-road capabilities. Although the company has successfully managed to offer as many creature comforts and convenience features as possible (along with a few exclusive ones) it’s lacking in a few areas. The three-door design and relatively tiny dimensions are perhaps its biggest criticisms.

To counter that, the company is currently working on a five-door version of the new Thar. Although the details of this upcoming model are still under wraps, there’s a lot of speculation floating around the web. Here, we have a digitally rendered image, created by Shoeb R. Kalania of IAB fame, which imagines the new Thar in its five-door avatar. 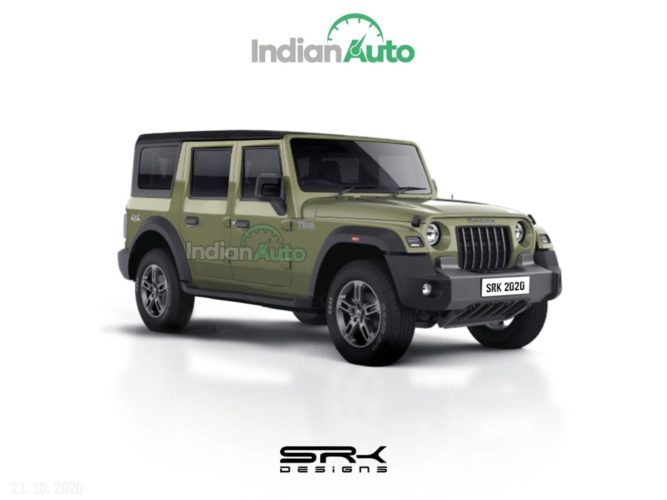 The design of the SUV has remained largely unchanged in this rendering; the front end sports the same rounded headlamps, vertically slotted grille, and dual-tone bumpers as the original three-door model. At the sides, we see the only change to the vehicle – addition of rear doors. The wheelbase has been stretched a little to accommodate them, which will liberate more interior space as well.

Other than that, the rear passengers will be able to roll the windows down, and the boot might also get some additional space, which adds to the practicality. The rear quarter section has been shortened, which is fine for the hard-top and soft-top models, but would be difficult to manage on the convertible model.

It is not yet known if the five-door model will also have various roof options though. As for the powertrains, it will get the same choices as the three-door model. This will include a 2.0-litre turbo-petrol motor (150 PS and 300 Nm), and a 2.2-litre turbo-diesel mill (130 PS and 300 Nm). Transmission options will include a 6-speed manual and a 6-speed automatic gearbox, and 4WD will be available as standard.