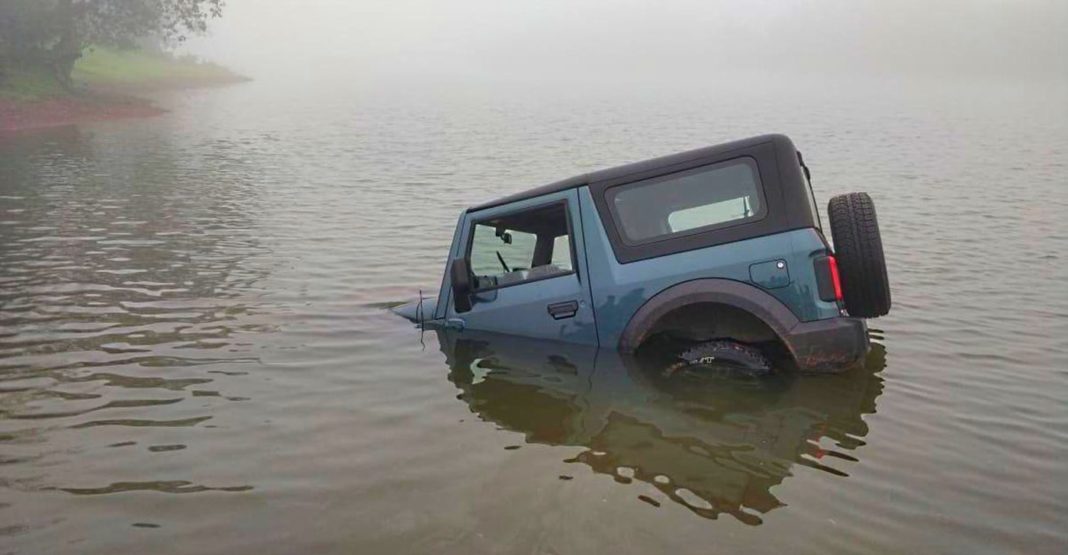 Although the new-generation Mahindra Thar is an extremely capable off-roader, it still has its limits, as demonstrated by this photograph

The second-generation Mahindra Thar is set to launch in India on 2nd October 2020. Before the vehicle is available to the public, there are a few media units that are doing rounds for reviews and tests. Recently, a video went viral on the internet, wherein the new Thar was seen attempting a huge jump. Now, a new photograph of the Thar has gone viral, but instead of a spectacular win, this one is an epic fail.

In this photograph, we see the next-generation Mahindra Thar stuck in a lake. The front end of the SUV is completely submerged, but thankfully, the vehicle hasn’t tipped over. The windows have been rolled down, and we’re assuming that the driver (and passenger, if there was one) used it to escape the drowning vehicle.

This particular photograph was clicked somewhere in South India. Mahindra officially claims that the Thar is capable of wading through 650mm deep water, which is quite impressive by itself. This lake, however, surely seems deeper than that. In lakes, ponds, and other water bodies, it’s hard to judge the depth if the water is muddy, which it usually is in the monsoon season.

There are two possibilities as to why this Thar got stuck. It could be possible that the driver was unaware that the lake’s floor had varying depth, and accidentally pushed the SUV into an underwater ditch, waterlogging the engine. The second one – the lake bed consists of soft mud, which caved in by the Thar’s weight. Due to the weight of the engine, the front axle supports more weight than the rear, which is why the front end got stuck.

The first-gen Thar was quite a capable off-roader, and the new model has only improved upon it. The updated SUV gets more powerful engines (2.0L turbo-petrol and 2.2L turbo-diesel), better transmissions, 4WD with transfer case, brake-locking differentials, ESP, ABS, etc. Although the tech and equipment is impressive, the SUV has still its limits.

It’s quite dangerous to attempt such stunts, even if you’re an experienced driver. Off-road driving requires not only patience and skill, but good judgement as well. Here, we see a prime example of poor judgement. It is advisable to always have a backup vehicle when going off-road, in case you need to tow yourself out of such sticky situations.