The Mugen customised Jazz is showcased in a half-and-half style, at the recently held Tokyo Auto Salon in Japan

Honda took the covers off the fourth-gen Honda Fit at the 2019 Tokyo Motor Show last year. Also marketed as the Jazz in other countries, the car featured an all-new curvier design as compared to the previous-gen model.

The Japanese carmaker also recently showcased a customised version of the new Jazz, at the 2020 Tokyo Auto Salon, which was customised with custom body kits from Mugen. The company had to unveil two looks for the Jazz, and hence, the modified B-segment hatch with a half-and-half application.

The glossy red half is dubbed the ‘Dash’, and is the sportier one out of the two. It gets a carbon fibre surround for the front grille, along with a large air dam, paired with piano black front splitter. The Dash also gets side skirts, a tailgate wing and a large rear diffuser poking out. The matte white side is called ‘Skip’, which gets a little softer styling as compared to the Dash. It comes with a contrasting metallic gold treatment on the spoiler, the upper frame, the front grille, on the ORVMs, the front and rear splitter, and also the side skirts.

Both the Dash and the Skip sport the same 17-inch multi spoke diamond-cut alloy wheels, door visors and the carbon fibre rear tailgate garnish. The front fenders sport a 3D sticker which looks like real arrow-shaped vents. Inside the cabin, both the versions get Mugen badging on the side sill plates, starter button, door trim and the camouflage door mats. 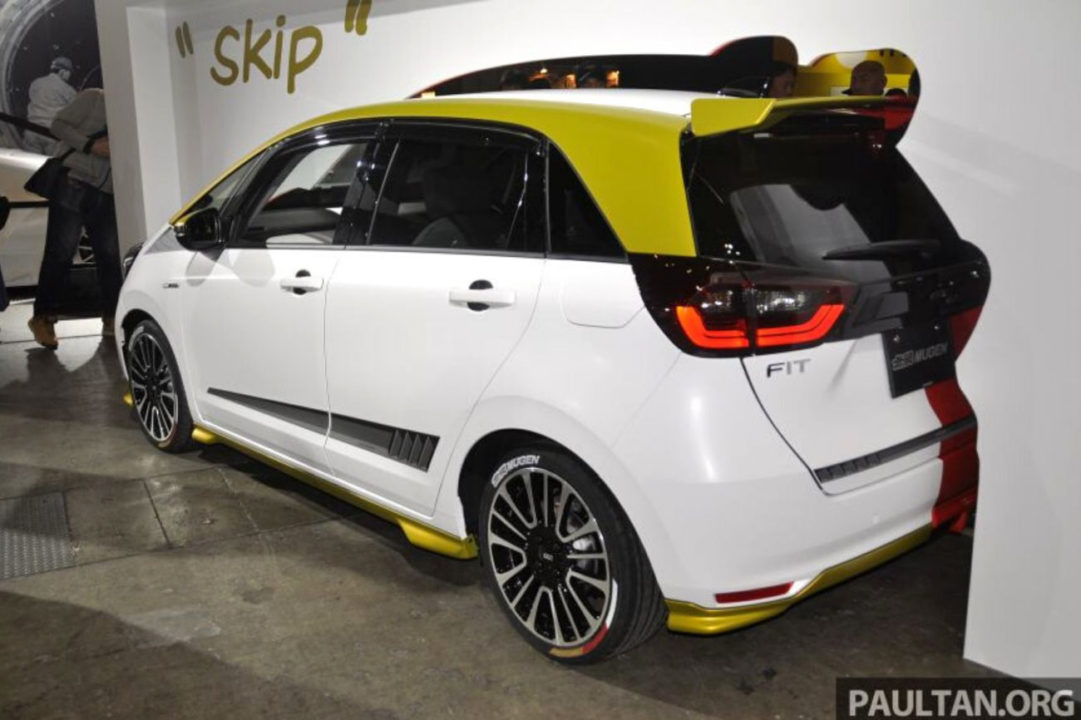 No mechanical changes have been made to the car under the hood. The 2020 Fit will be offered with a dual-motor hybrid (i-MMD) powertrain, which will likely be paired to a 1.5-litre petrol engine. Additionally, the car could also get a 1.0-litre turbocharged petrol engine with around 125 PS of max power.

Even though both the Fit and the Mugen components will go on sale in Japan next month, Honda has no plans of bringing the new-gen Jazz to the Indian market. The fourth-gen Fit (Jazz) is built on a new platform, and the low sales volume that the premium hatch incurs in the country, does not justify the huge investment required to bring the next-gen model.