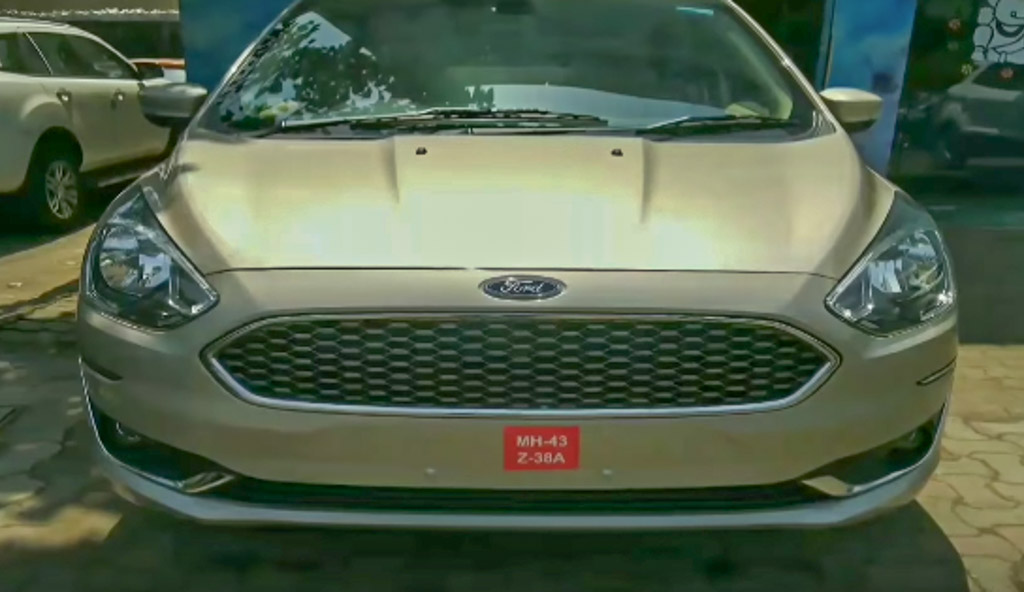 Ford India will launch the Ford Aspire facelift on 4the October. The updated car will lock horns with the Maruti Suzuki Dzire and the Honda Amaze. It will carry several exterior and interior styling updates, more features, and a new 1.2-litre petrol engine that will replace the four-cylinder unit of the existing model.

The Ford Aspire facelift for India has been styled on the lines of the Ka+ sedan that is sold abroad. The 2018 Ford Ka+ is basically the export-spec model that’s produced by Ford India at its Gujarat-based facility.

The Ford Aspire facelift features a sleeker grille, an updated pair of headlamps and a sportier front bumper that carries chrome embellishments around its foglamps. In the side profile, the top-end variants will get multi-spoke alloy wheels. The rear will get slightly revised taillamps and a new bumper that gets fake air scoops at its edges. This makes the bumper look really sporty.

The interior of the 2018 Ford Aspire facelift will get a new dashboard that comes from the Freestyle CUV. The SYNC infotainment system of the current car will be replaced with the more advanced SYNC3 unit. While the older version of Ford’s infotainment system sports a dot matrix display, the new SYNC3 infotainment unit has a touchscreen interface. It also supports Apple CarPlay and Android Auto.

The current 1.2-litre four-cylinder petrol engine will be replaced with a new three-cylinder version from the Dragon series. The new engine produces a maximum power of 95 hp and a peak torque of 120 Nm. It will come mated to a 5-speed manual transmission as standard and a 6-speed automatic as optional.

The diesel engine will continue unchanged and the 1.5-litre petrol engine will be discontinued. All these updates should help the 2018 Ford Aspire facelift become a stronger rival to the Honda Amaze and the Maruti Dzire. An electric version of Aspire also appears to be in the pipeline with assistance from Mahindra next year.