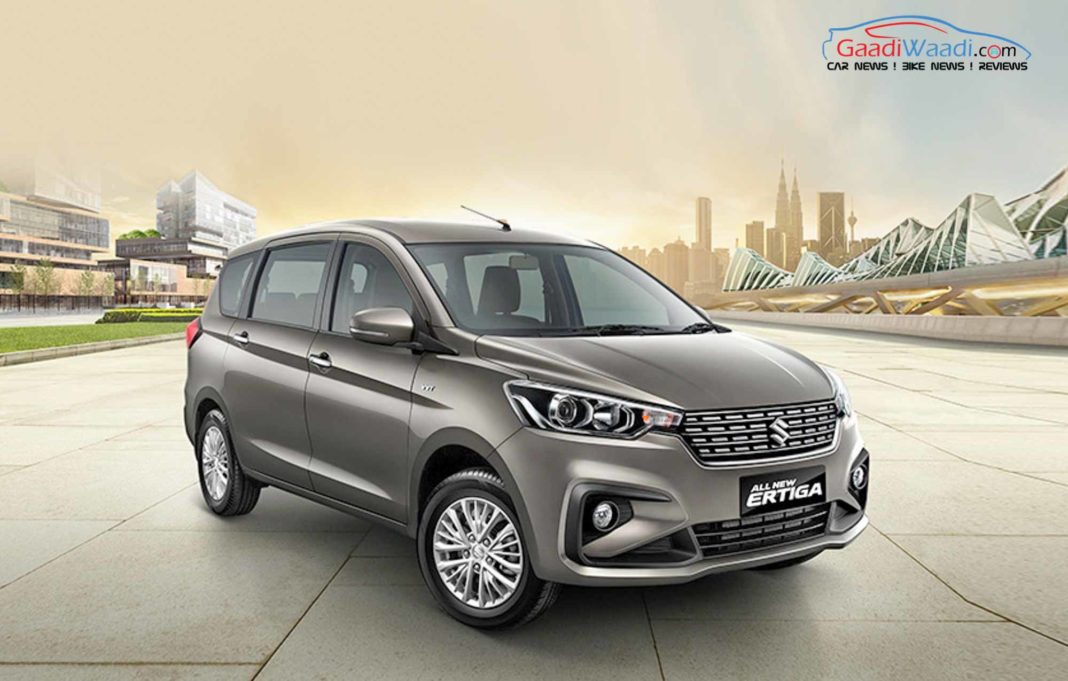 Maruti Suzuki India Limited introduced the first-gen Ertiga back in April 2012 and it is a popular vehicle in Southeast Asian markets as well. Claimed to be the “Life Utility Vehicle” it received good response among customers for its spacious nature and family-oriented buyers have opted for it over its competitive rivals due to the features and mileage on offer.

The Ertiga continues to shine as a MPV when Honda BR-V and Renault Lodgy could not be able to summon their authority in the segment. Just like the premium Toyota Innova Crysta, Maruti Suzuki Ertiga has always had consistent sales numbers but in response to the growing demands of the consumers, an all-new version is highly anticipated.

The people hauler will be seen with substantial tweaks and additional room for occupants. The first traces of the new Ertiga emerged on the internet way back in October 2017 locally and it has entered Indonesian market officially before launching in India later this year.

The upcoming MPV is based on a brand new architecture and it has bigger proportions than the outgoing model. With Indonesian-spec model showing all the certain changes we will get, here is everything you need to know about the 2018 Maruti Suzuki Ertiga:

The forthcoming MPV was expected to make its debut at the Auto Expo in February but it did not happen. However, seeing the development of the test mule in India, it could take a few more months too and is expected to greet customers by October. But, before that, the Indonesia-spec Suzuki Ertiga gives us all the necessary information about the India-bound model.

The nine-seater is expected to target audience in the Rs. 7 lakh to Rs. 11 lakh price bracket with packed features and fuel efficient powertrain.

It could inherit Suzuki’s in-house developed 1.5-litre diesel engine instead of the current tried and tested unit 1.3-litre inline four-cylinder DDiS unit in later stages of its lifespan. Whether a SHVS Hybrid option will be incorporated in the 1.5-litre motor or not is up for anybody’s discussion right now.

The existing 1.4-litre K-Series VVT petrol engine in the Ertiga won’t be carried forward though as it will be replaced by a 1.5-litre K15B motor making 104 hp of maximum power and 138 Nm of peak torque. It wil likely be mated to a five-speed manual or a four-speed torque converter automatic. The new Ertiga runs on 15-inch alloy wheels with 185/65-R15 section tyres.

We can expect the existing powertrains to come with slightly tuned engine for mild fuel efficiency improvement in India. It could be around 18 kmpl for petrol and 25 kmpl for diesel.

The new Maruti Suzuki Ertiga is based on Suzuki’s lightweight Heartect platform as the lightness and added stiffness will aid in increased fuel economy as well as safety. It is the suspected reason why the test mules appear to have increased proportions. The 2018 Ertiga is 99 mm longer than the outgoing model and it is wider by 40 mm and taller by 5 mm as well allowing for more room inside the cabin.

The kerb weight could go down to 1,100 kg courtesy of the lightweight architecture and it adopts same wheelbase as the current version. The ground clearance is reduced by 5 mm and the fuel tank capacity stays the same at 45 litres. However, the bootspace when all seats are up has decreased to 153 litres from 185 litres.

The upcoming 2018 Maruti Ertiga will have an evolutionary exterior compared to the current Ertiga and bear a similar overall profile. It adorns a sharper front fascia with an all-new projector headlamp, reworked fog lamp cluster and grille assembly. Moreover, the rear overhang has been extended for roomier cabin while the tail lamp cluster has received modifications with presence of new graphics. 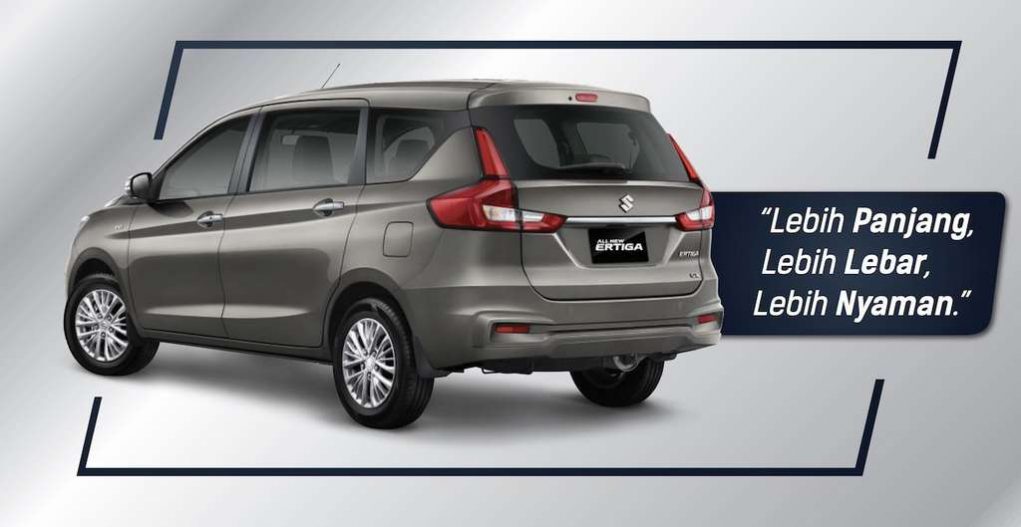 The tailgate window has been shortened with a more appealing stance – making it look like a two part design. The tail lamp graphics also sees revisions along with incorporation of LED signature as well with minor tweaks to the rear bumper. The top-of-the-line versions will get LED Daytime Running Lights and projector headlamps. The rear wiper is now mounted on the centre of the rear glass area.

As the 2018 Ertiga reportedly being built on a new platform, it will bring major changes to the interior as well. The longer and spacious cabin will draw more attention from the family-oriented customer base.

Moreover, the large overhang at the back will give way to an improved third row as well as cargo space in comparison to the outgoing model. The Ertiga’s cabin is more upmarket as the Heartect platform also underpins the latest Maruti offerings. It features a similar dashboard design as the new Dzire. Expect materials from the familiar parts bin of Maruti Suzuki with premium touches. 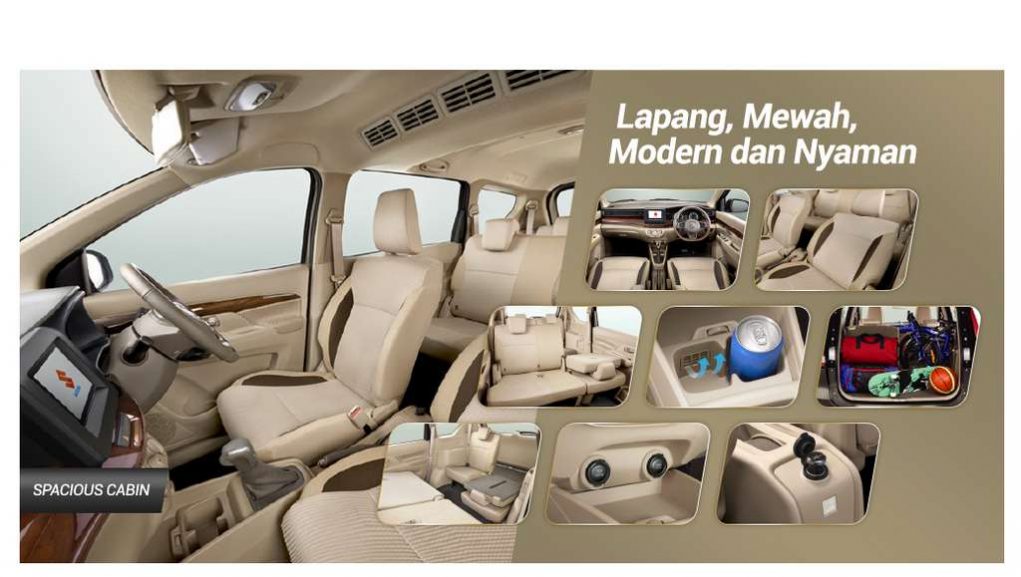 The range-topping models will borrow the same touchscreen infotainment system from the Dzire with Apple CarPlay and Android Auto connectivity. It will stick by the upcoming Indian crash test and safety norms. As for safety, dual front airbags will be standard across the range with ABS and EBD for increased protection.

Indonesia-spec model gets new instrument panel and flat-bottomed steering as in the Swift twins with dashboard finished in beige and black colour. The AC vents are now vertically positioned and there is presence of new 6.8-inch touchscreen infotainment system and cooled cup holders.