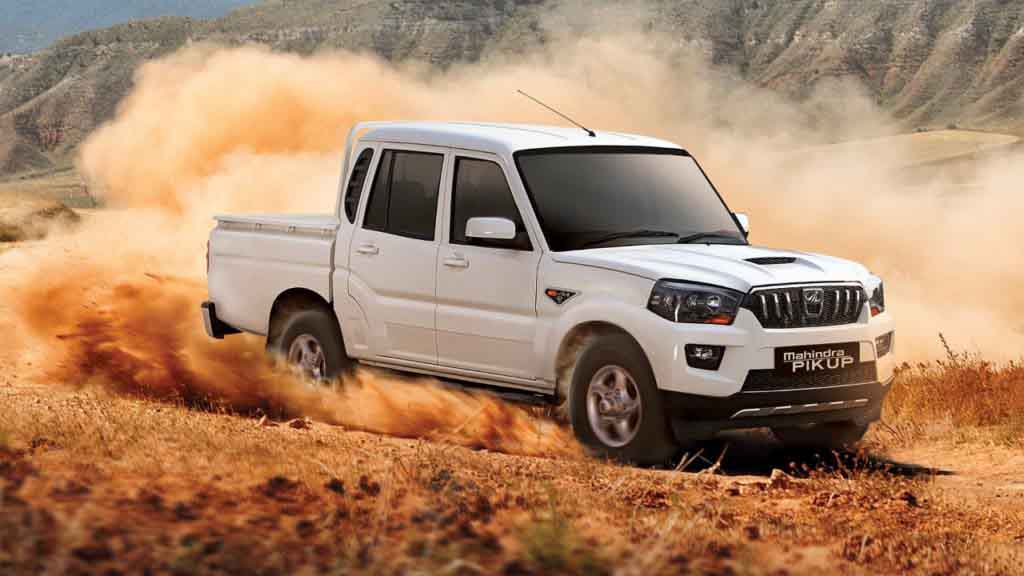 Mahindra has unveiled the India-bound new Scorpio pick-up truck at Automobile Barcelona. The pick-up truck gets a completely overhauled appearance that has been long overdue. Compared to the current model, the 2018 model becomes more aggressive, sharper and appealing. This vehicle is likely to go on sale in Europe from early 2018 and expect it to be launched in India in a few months.

The all-new Mahindra Scorpio pick-up truck sports a completely new front grille in line with the Scorpio SUV. The radiator grille gets vertical slats with chrome garnishing and the headlamps has been updated as well following the SUV and it sports dual projector headlamps with integrated LED daytime running lights portraying an eyebrow like appearance.

Apart from that, the front and rear bumpers have been updated along with turn indicators and there faux side air vents. The hood has been revised as well and it appears more sculpted with the new design. A skid plate is there at the bottom of the front fascia enhancing the vehicles off-roading capability. Rear of the new Scorpio pick-up truck gets vertically positioned taillights.

Not only the exterior, but the interior of the vehicle too has received various changes in order to become more upmarket and comfortable for the occupants. The double-cab pick-up truck offers generous amount of space and comfort to the five occupants inside the cabin. There is a multi-function steering wheel with silver accent, an uniquely crafted looking instrument cluster with analog dials and a digital MID at the centre along with a 6-inch touchscreen infotainment system at the centre console. The HVAC vents and control buttons have been changed and there are rear AC vents, automatic climate control.

The homegrown automaker is yet to reveal details about the new Scorpio pick-up’s engine specification. The India-spec model is expected to be powered by a 2.2-litre mHawk diesel engine that is capable of churning out 120 hp of peak power at 4,000 rpm and 290 Nm of peak torque between 1,600 rpm and 2,800 rpm. Transmission duty will be done by a 5-speed manual gearbox and power will be sent to all the four wheels in order make the vehicle capable of running on all-kind of terrains.