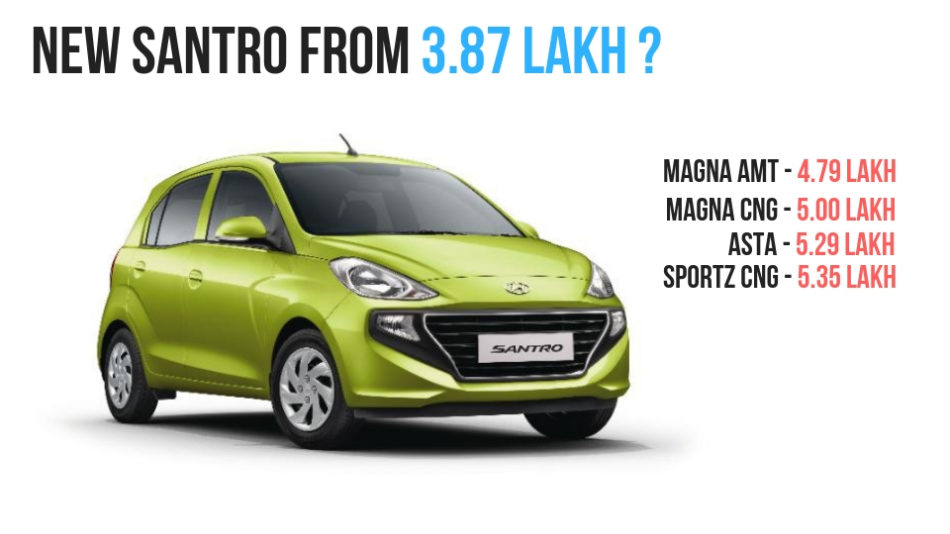 Hyundai Motor India Limited (HMIL) is all prepared to launch the new Santro on October 23 and its official pictures have taken the internet by storm. It is expected to make a big impact in volume sales and shake up the pecking order in the months to come against top rivals like Maruti Suzuki Celerio, Tata Tiago and Renault Kwid.

The 2018 Hyundai Santro’s pricing has long been a subject of discussion and as we predicted earlier, the starting range is going to be bang on target. The new hatchback carries the design traits of the original Santro emphasising interior space with a tallboy design, and its modern exterior meant it will become a highly sought after car in its segment along with having packed equipment and safety lists.

The new Santro prices will start at Rs. 3.87 lakh for the base DLite petrol version and it goes up to Rs. 5.29 lakh for the top-spec Asta variant. As for the petrol-CNG combination, the two variants on offer will carry sticker tag of Rs. 5 lakh for Magna and Rs. 5.35 lakh for Sportz (all prices, ex-showroom).

Hyundai’s pricing of the Santro will position it between the Eon and Grand i10. The upcoming Santro’s online bookings have commenced for Rs. 11,000 and these introductory prices will be available only for the first 50,000 customers as Hyundai wants more customers from the get go.

The small hatchback is powered by a 1.1-litre four-cylinder petrol engine, which is good enough to produce a maximum power output of 69 PS and 99 Nm. It is mated to a five-speed manual transmission as standard while Hyundai’s first ever five-speed AMT will also be on offer – both claiming to have 20.3 kmpl mileage.