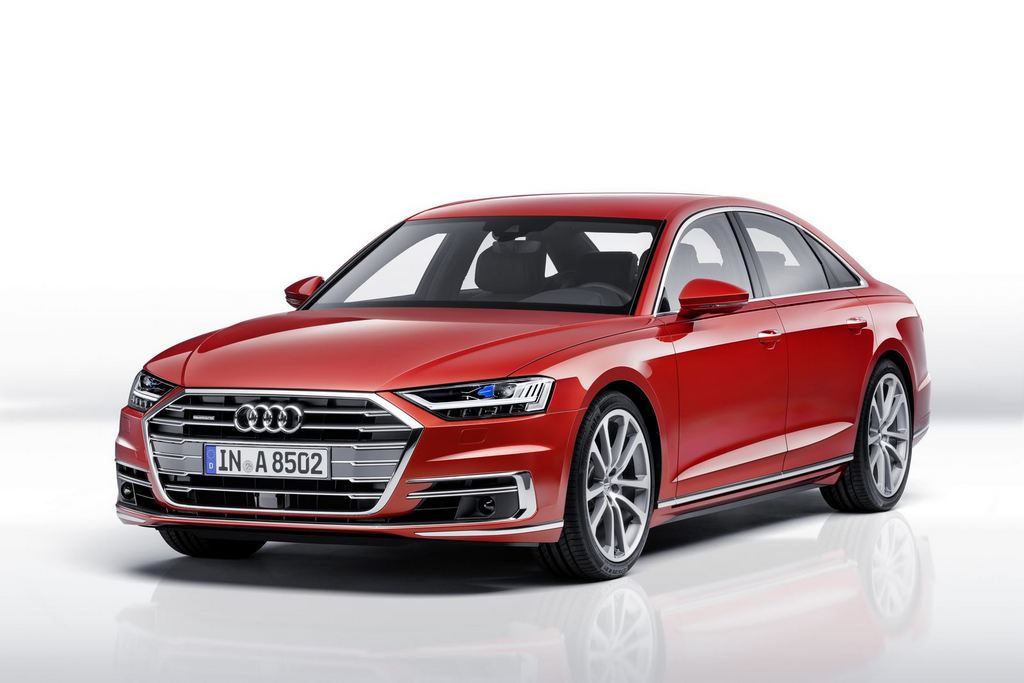 2018 Audi A8 flagship sedan has evolutionary design, Level 3 autonomous features and a slew of other highly-advanced tech wizardry

Audi revealed its new A8 sedan officially showcasing the production model with notable changes a few months ago. The Ingolstadt-based manufacturer premiered the new avatar of the flagship sedan at the Audi Summit in Barcelona, Spain and it has now made its North America debut at the 2017 Los Angeles Auto Show.

Ahead of its debut though, it featured in the ‘Spider Man: Homecoming’ movie released on 7th July in the US. We showed you what the new Audi A8 will comprise of before as the redesigned next generation model is most technologically advanced than ever. Here is everything you need to know about the upcoming Audi A8 from Indian buyers’ perspective: 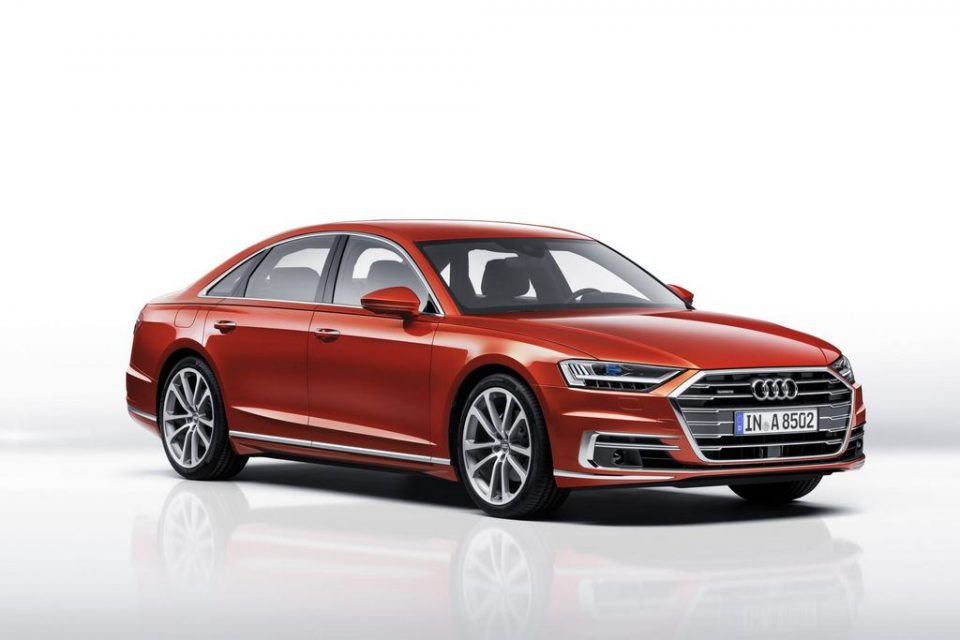 The German manufacturer may not waste any time in bringing the new A8 to India and first signs of it are that it has been spotted testing locally. As we thought, it could be arriving during the course of next year. It is likely to be locally assembled in Aurangabad and only the A8 L version (long wheelbase) is said to be the specific model according to a recent internet report. We cannot expect the Level 3 autonomous system anytime sooner though. 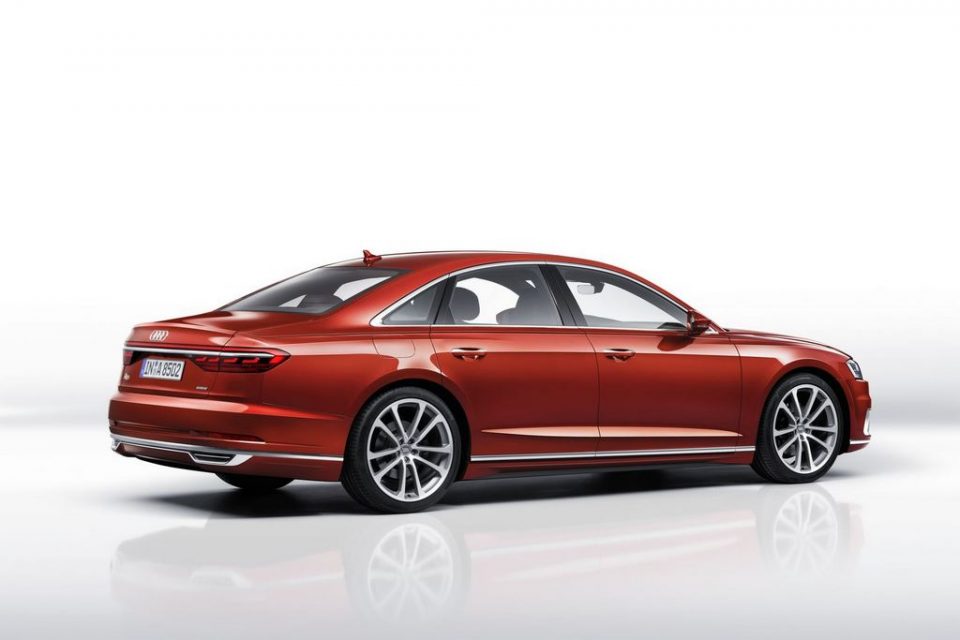 Rivaling against the Mercedes-Benz S-Class and BMW 7-Series, the new A8 will be offered with two V6 turbo engines, a 3.0-litre TDI and a 3.0-litre TFSI in its home country. The diesel engine makes 286 hp while the petrol will deliver up to 340 hp. The 4.0-litre TDI V8 with 435 hp will be made available with a 460 hp 4.0-litre V8 while the range-topping 6.0-litre W12’s performance is yet to be revealed.

The powertrains operate along a belt alternator starter and courtesy of the 48-volt electrical system, the A8 can be switched off and restart smoothly when required. This helps in reducing the fuel consumption by up to 0.7 litres per 100 km in real time. Sometime later, an A8 L e-tron quattro will be introduced and it will combine a 3.0-litre TFSI engine with an electric motor to deliver 449 hp and 700 Nm of peak torque. The lithium-ion battery pack is claimed to ensure electric range of about 50 km. 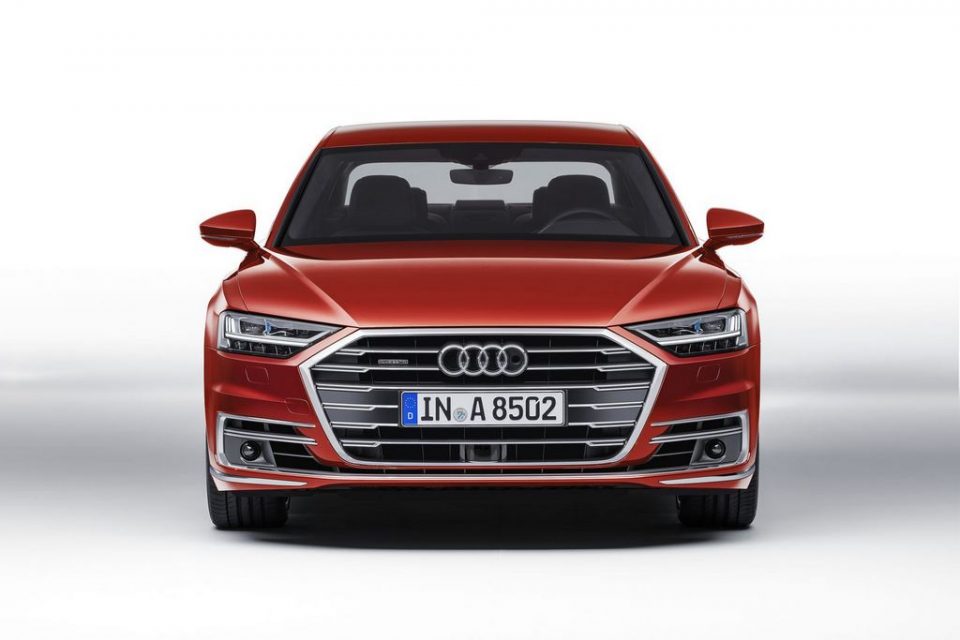 2018 Audi A8 Exterior and Interior

The new flagship luxury A8 sedan gets its design language inspired by the Prologue concept that was showcased even at the 2016 Delhi Auto Expo. It features a more pronounced front fascia than before with seamlessly incorporated thin horizontal LED headlamps, LED DRLs, larger single-frame chrome grille, restyled bumper, full-width tail lights that are brand new in design, sturdy character lines, sleek roofline giving a coupe-like shape, etc. Created by Marc Lichte, the A8 is utterly sleek in appearance than the outgoing model. 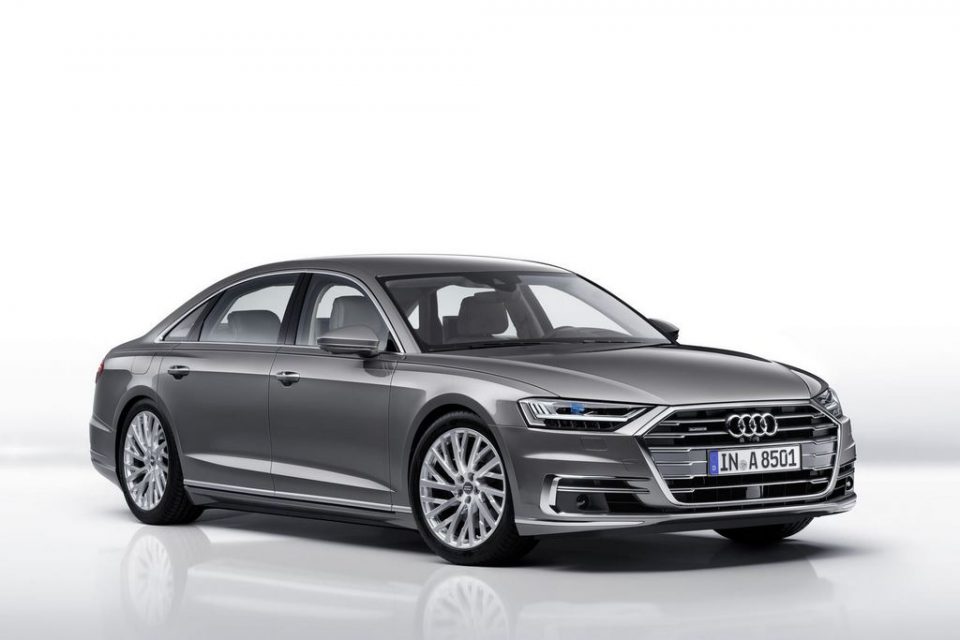 It boasts all the sophistication and luxury a flagship sedan would have on the inside as well. It gets a two-spoke steering wheel inspired from Prologue, new Virtual cockpit, sharper door panels, dashboard and interior trims among other posh bits. Build on the MLB Evo architecture, it gains a mild-hybrid drivetrain and can coast along at certain speeds even when the engine is shut down.

The 2018 A8 uses 48-volt electrical system and thus comes with several advanced techs like a fully active electromechanical suspension system. It works in a way that an electric motor on each wheel, a rotary tube, an internal titanium torsion bar and lever apply up to 1,100 Nm of torque on the suspension thanks to the coupling rod. 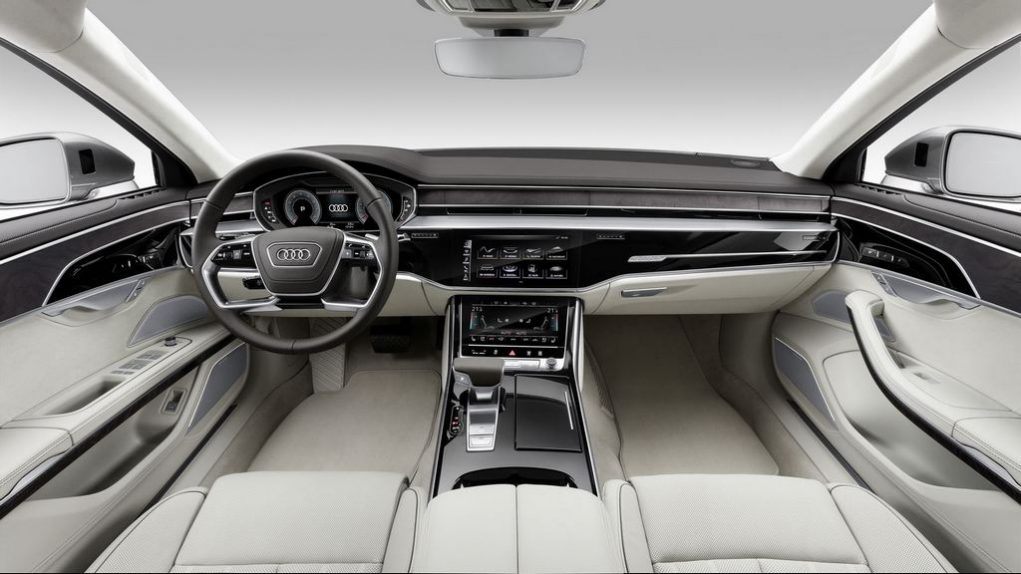 It functions along with the front camera to detect bumpers and allows the suspension to automatically adjust to the smoothest possible ride – in turn eliminating all vibrations and jolts according to Audi. The remote parking system can be operated through a remote even without occupants inside.

It facilitates Level 3 autonomous driving at speeds of up to 60 kmph in jammed-up traffic while the whole new Pilot function enables the vehicle to deal with steering, braking and throttle controls using sensors and NVIDIA hardware technology. In selective situations, the driver can hand over entire driving duties to the intelligence of the car itself. 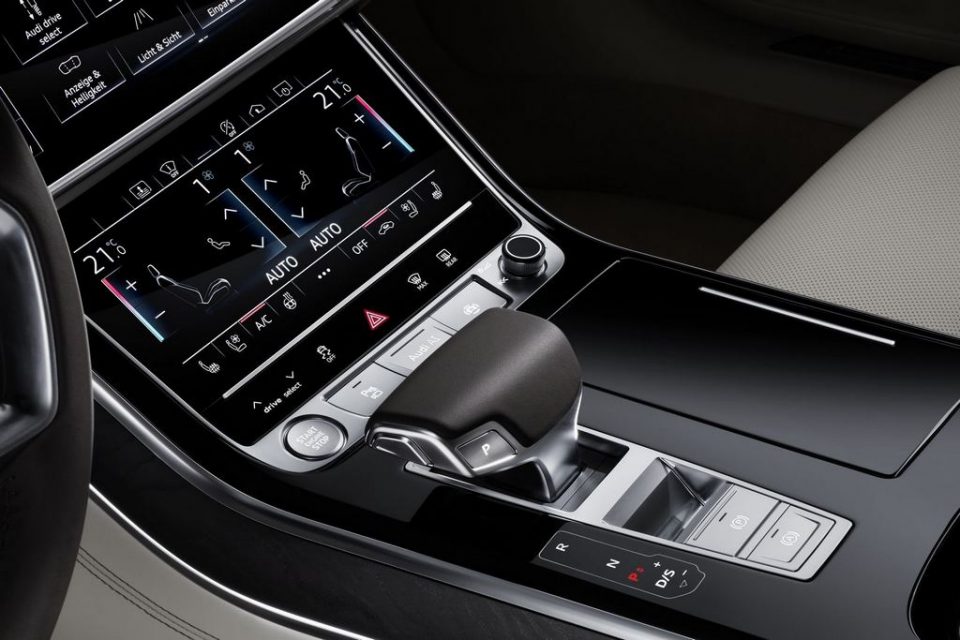 For any tech-savvy luxury car buyer, the fourth generation A8 is believed to be a dream of a machine with its Tegra K1 processor and the MIB2+ core allowing for multiple high-res displays. There is also be a new-gen Audi Virtual Cockpit assistance along with remote parking pilot through smartphone application.