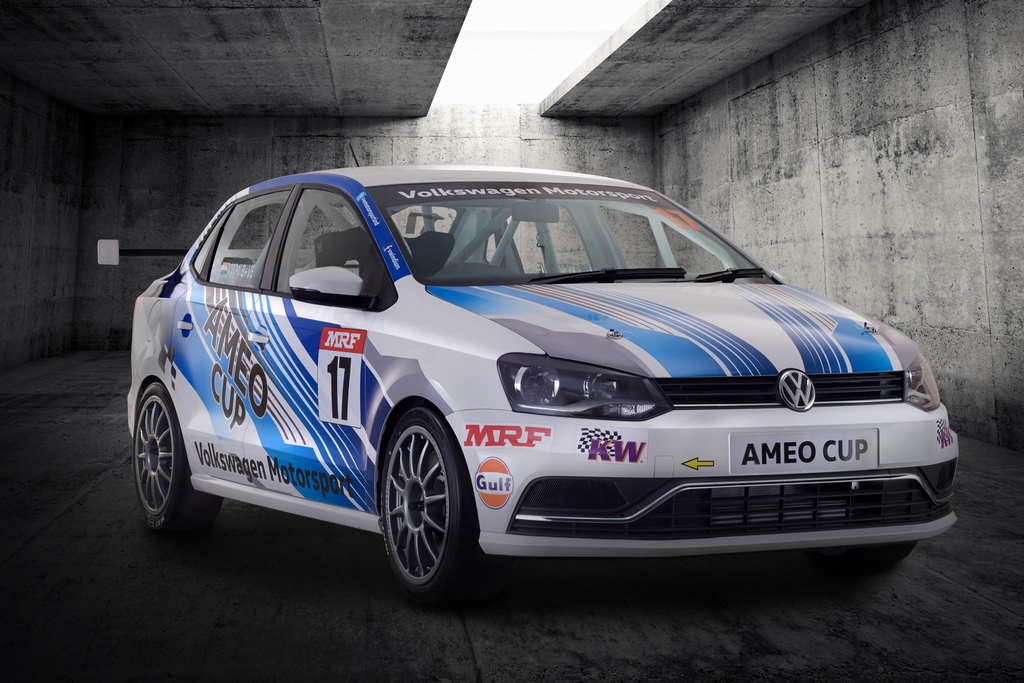 Volkswagen Motorsport India is preparing for the 2017 Ameo Cup that will get underway at th premiere racing circuits in India later this year. The profound success of the one-make-series based on Vento sedan and the Polo hatchback over the years has instigated Volkswagen to take giants leaps into a new category of race series based on the Ameo.

What makes the upcoming championship more special is the fact that the subcompact Ameo sedan is the first indigenously built car by VW specifically for India. Unlike the production car which did receive considerable inputs from Germany, the race machine has been developed entirely at Volkswagen’s plant in Pune for the very first time and it shows the velocity in which the art of motorsport is growing in our country. 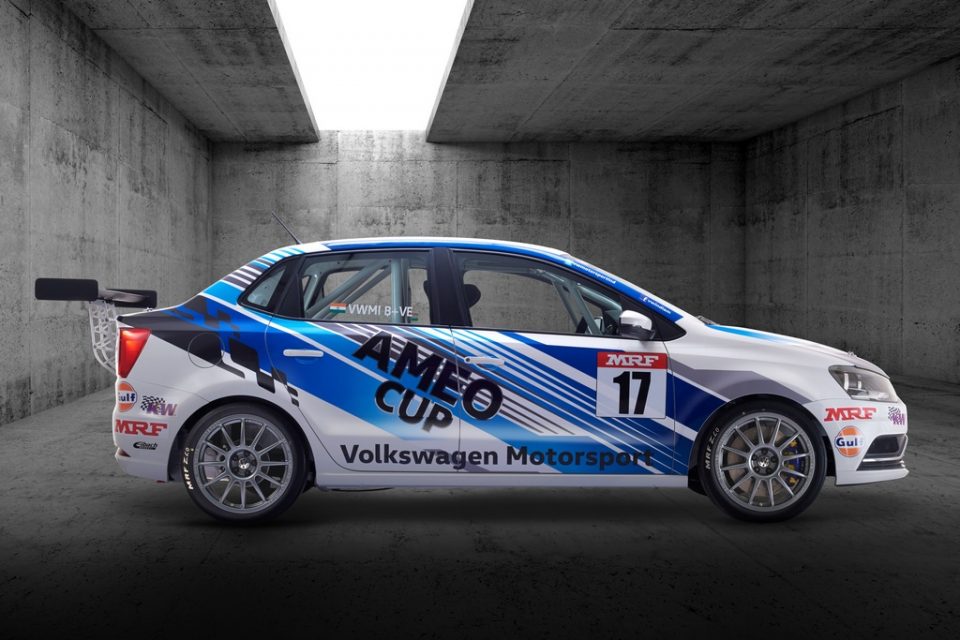 Volkswagen began its racing operations in India with the Polo Cup back in 2010 which eventually evolved into Polo R Cup and the Vento Cup as vital platform for tin-top racers. Some local talents did went on to shine in international racing arena as well. Not restricting themselves to tarmac, the VW Polo rally cars competed in the Indian Rally Championship (IRC) with technical assistance and spares since 2013 and went on to achieve hat-trick wins in the Group N 1,600 cc class, before going on to clinch the overall championship across all categories in 2016.

Born and bred out of those triumphs, the Ameo Cup car features major upgrades when compared to its predecessors – right from the chassis to mechanical underpinnings as well as on-board electronics. Sharing its body shell with the road-going cousin, the Ameo Cup race machine derives engine from the performance-based GTI. Underneath the hood hides a four-cylinder inline turbocharged engine that generates a massive 205 PS at 6,100 rpm and 320 Nm of peak torque delivered between 3,200 rpm and 4,500 rpm. 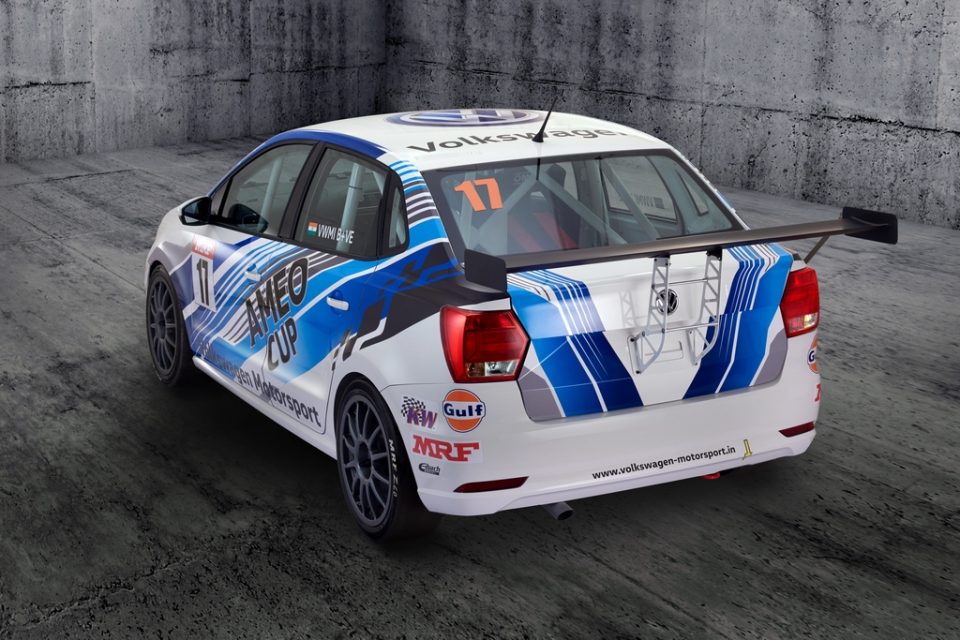 The 1.8-litre TSI engine is connected to a six-speed sequential transmission with shifters mounted on the back of the steering wheel. The independently calibrated ECU (Engine Control Unit) is completely new and is mapped to suit the control system of the new engine and the gearbox. The Ameo Cup race car is Riding on a whole new suspension setup, the Ameo Cup race car is shod on specially developed race tyres.

With the mission to take the one-make series to a new high, the Ameo racer has been developed in-house from the ground up and according to its official development driver, Karthik Tharani, it is a mouth-watering 4.6 seconds faster than the Vento Cup car in only its initial tests phase at the Madras Motor Race Track. In racing terms, that’s quite a huge feat and as the season progresses we could see even faster lap times. 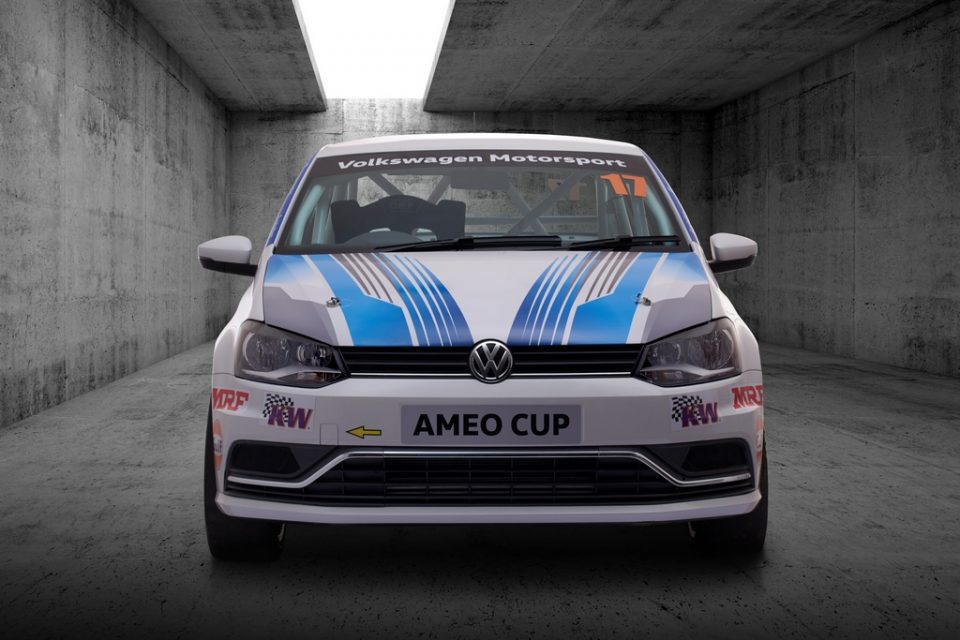 The new season is scheduled to kick off in the month of June at the fabled Kari Motor Speedway in Chettipalayam near Coimbatore. It will be followed by two back-to-back rounds at the Madras Motor Race Track (MMRT) in Chennai before the conclusive stage at the F1-standard Buddh International Circuit (BIC) near Greater Noida.

The EA888 1.8 TSI performance engine is the same unit that works under the engine bay of the Volkswagen Polo GTI, launched late last year for Rs. 25.65 lakh (ex-showroom). But it has been further tuned to deliver an improved torque curve adhering to race circuits. MoTeC engine management system is used to develop the engine in-house. It is supported by a new light weight flywheel and clutch specially made by Sachs Race Engineering.

A six-speed sequential gearbox from 3MO has also been developed to gel in with the high torque output of the engine as opposed to the previously used six-speed DSG. An electro-magnetic actuator responds to the quick gear changes of the new race-going Ameo while its actuator keeps the driver from accidentally changing down extra gears. 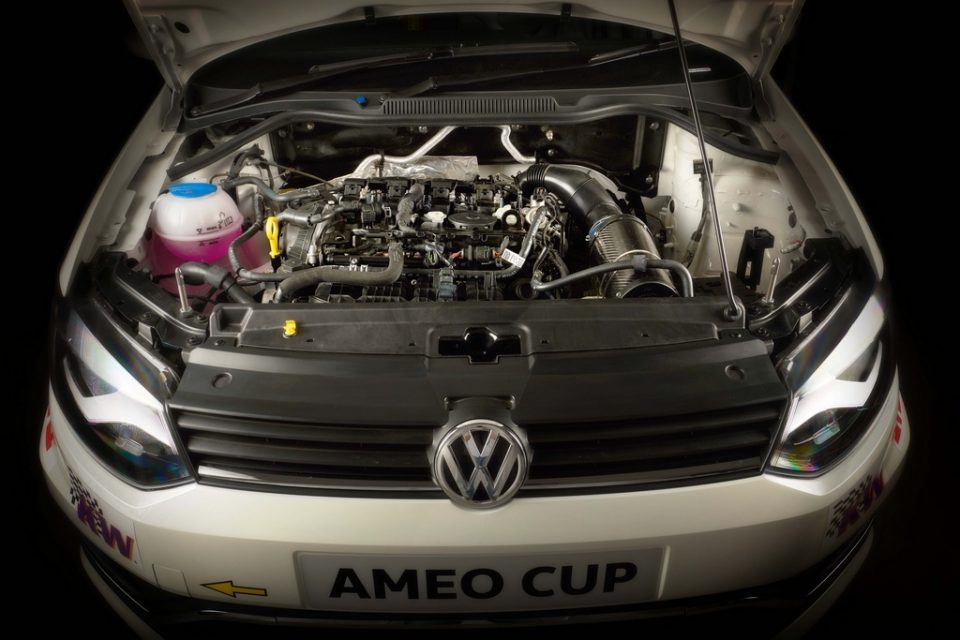 It also gets new race-derived brake pads and 334 mm ventilated discs at front with 232 mm discs at the rear. The limited-run Polo GTI can sprint from 0-100 kmph in just 7.2 seconds and can max out 233 kmph, expect the race-spec Ameo to go even quicker.

The Ameo Cup race car has the same wheelbase as the Polo but shorter than the Vento Cup car for better handling and agility. Components such as the fire extinguisher, battery and the windshield washer tank are fitted with balance of weight in mind to achieve desired performance. The race-spec Ameo has different springs at the front and the rear along with torsional beam axle at the rear. The valving of the KW damper is developed in accordance with the new MRF tyres and the new lighter 17-inch wheels. 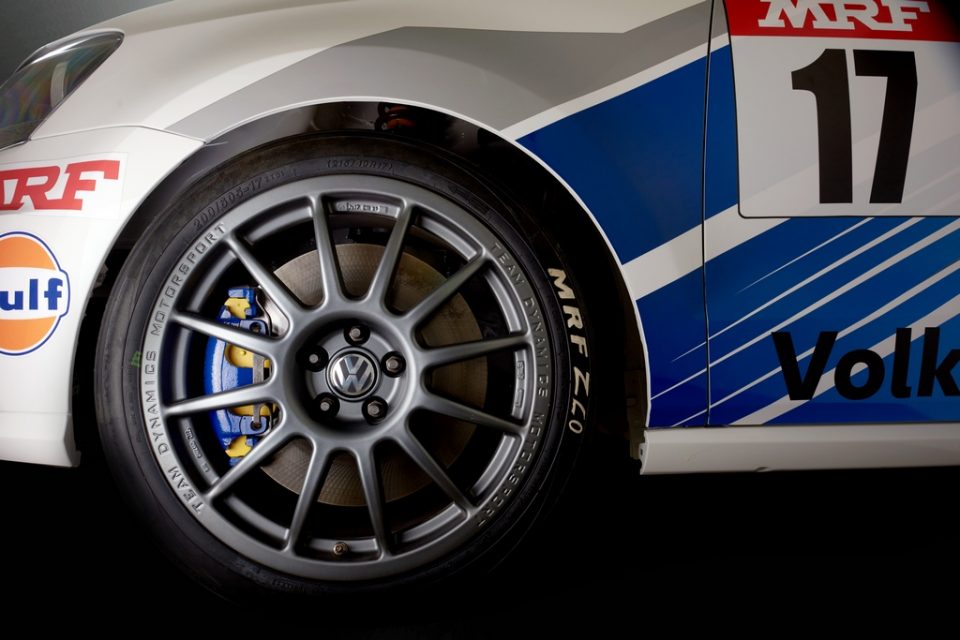 Volkswagen manages the mapping and calibration of the engine, gearbox and shift actuator with the MoTeC M142 engine control unit (ECU). The ECU is linked to the MoTeC C125 colour dash display and data logger equipped with programmable shift lights. The Ameo Cup race car does not have a fuse box and instead gets MoTeC PDM 30 carrying out the power distribution and acting as the fuse box and body control module (BCM) on its own. 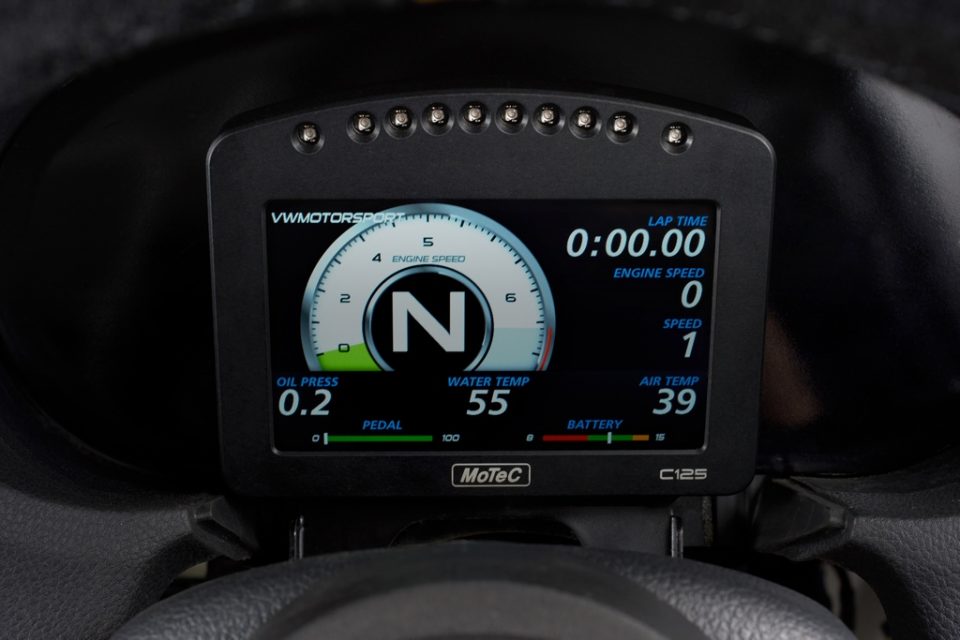 Safety is a paramount importance for any race car and Volkswagen has long been a pioneer providing equipment of latest FIA standards. The Ameo Cup race car features a weld-in roll cage designed to optimise and enhance driver protection along with chassis torsional rigidity. The roll cage extends from the front strut mounting tower to the rear damper mounts this time around. It is also equipped with seats and seatbelts from OMP racing while the emergency fire occasions are handled by FIA approved SPA on-board extinguisher. 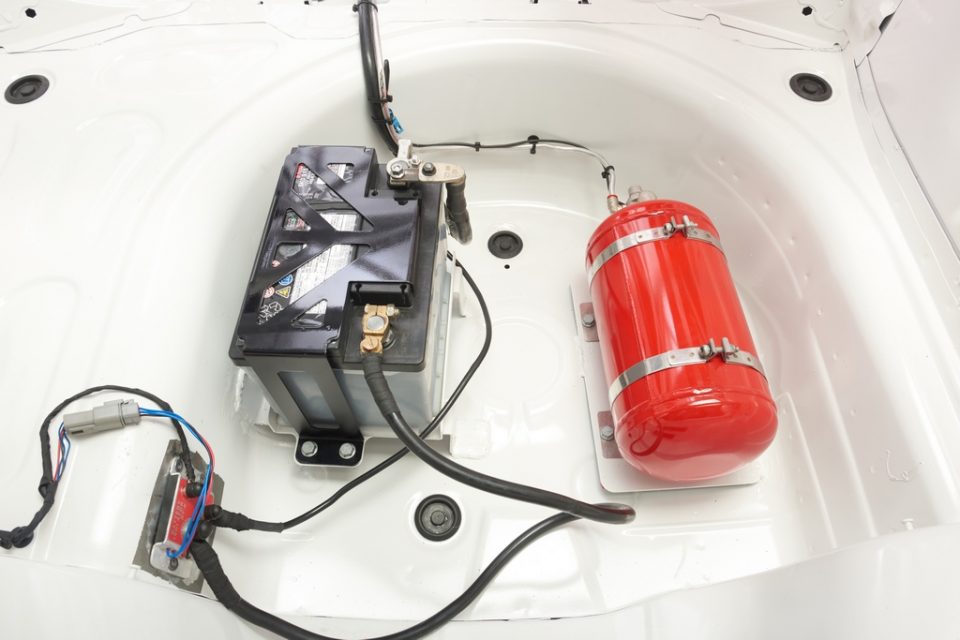