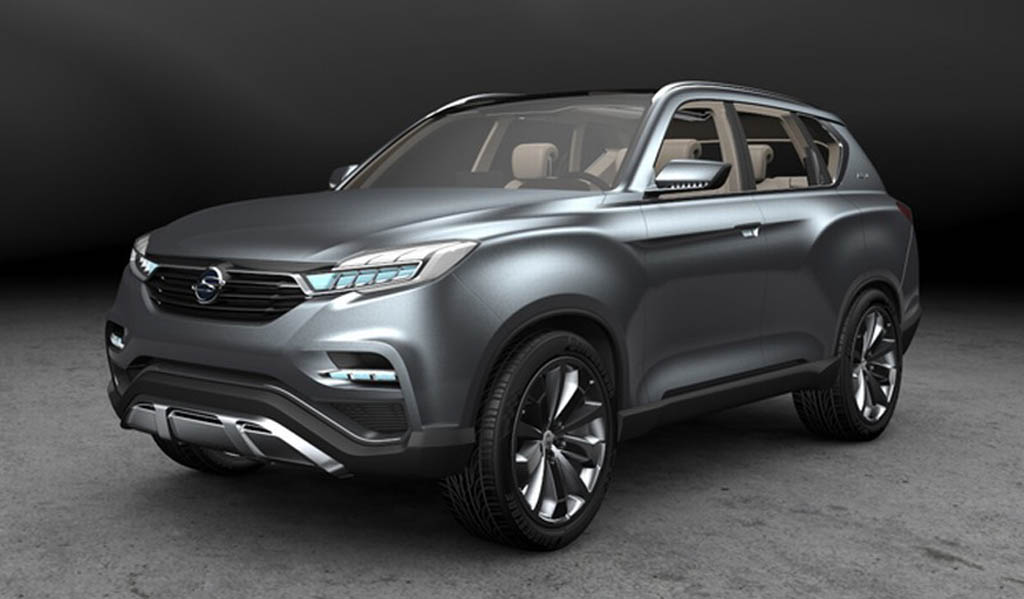 The 2017 SsangYong Rexton codenamed as the Y400 is gearing up for its debut at the upcoming Paris Motor Show this year. The muscular looking South Korean auto manufacturer developed SUV has taken the design cue from the LIV-1 concept car which was unveiled at the 2013 Seoul Motor Show. The SUV has been designed taking inspiration from a range of things, which include traditional Korean aesthetics, landscapes, mountains, pine trees, art, polar bear etc.

The Auto Express has received a look of the upcoming SsangYong Rexton SUV in flesh, which is scheduled to go on sale in UK sometime in next year. As Auto Express suggests, the car will sport a design which has been designed inspired by Volvo XC90 as well. As the 2013 LIV-1 concept showcased, the car will sport an aggressive front fascia, which will come featuring a hexagonal radiator grille, sleek headlamp clusters, expected to receive LED headlamps and integrated LED daytime running lights.

The front bumper would be massive with wide air intake and large air dams at both sides. The fog lamps would be horizontally placed and expected to feature LED units. A skid plate would be there enhancing the bold vibe. On the side profile the wheel arches in the LIV-1 concept were flared out housing the sporty and bold alloy wheels. The roofline of the car is said to be sloping like the Tivoli.

The SsangYong Rexton’s interior has been designed like the old generations of Mercedes Benzs. The little information we know about the interior is it is pretty stylish actually and the touchscreen infotainment system and the control buttons at the centre console makes the interior impressive. To make the interior premium SsangYong will offer a range of leather and wood options to the customers for the dashboard trim, while enhancing the appeal will be plenty of chrome garnishing.

Talking about the space inside the 7 seater cabin, the Rexton will offer sufficient leg space and knee room for the rear passengers. Although the sloping roof means it might create a little trouble for the tall passengers at the rear seats.

On the power front, the Rexton is expected to receive a 2.0 litre GDi turbocharged petrol engine under the hood, but the UK spec model would be powered by a 2.2 litre diesel engine paired with a Mercedes Benz sourced seven speed automatic gearbox and churn out 178 bhp of peak power.