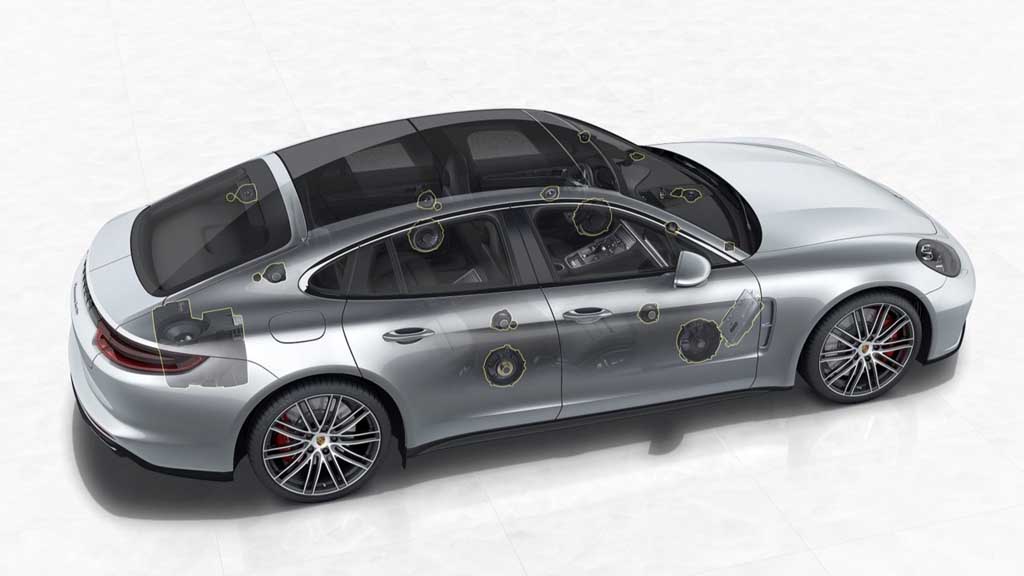 The new generation Porsche Panamera is all set to hit the roads. It comes with several updates; on the dimension and design front, interior features etc. Now the German automaker has added an optional 1,455 watt 3D stereo system developed by Burmester for the luxury car. The car maker claims, this new stereo system will offer a concert hall like surround sound experience to the occupants. Not only ensuring a superior sound experience. This new Burmester developed 3D surround system will also improve the quality of the satnav sound and the hands free phone sound. Incidentally, the standard Panamera gets 16 speakers. Porsche also says, al the sounds can be directed to one single seat as well. In Germany the special 3D surround system costs € 6,747 on the Panamera 4S and 4S Diesel. While the Panamera Turbo gets the package at € 5,331.

Compare to the outgoing Panamera, the new model comes dimensionally longer, wider and taller. It is based on the Modular Standard Architecture (MSB) platform. The car has been treated with extensive aluminum bodywork. This makes the new Panamera lightweight, therefore saving some precious fuel and making it easy handling. On the design front, the car comes much sharper compared to the previous model. Inside the cabin the car offers premium luxury. A new 12.3 inch tablet shaped touchscreen infotainment system facing the driver has made its way into the new model. This comes equipped with Apple CarPlay. It works as the display of the thermal imaging camera which enables the driver to see in dark.