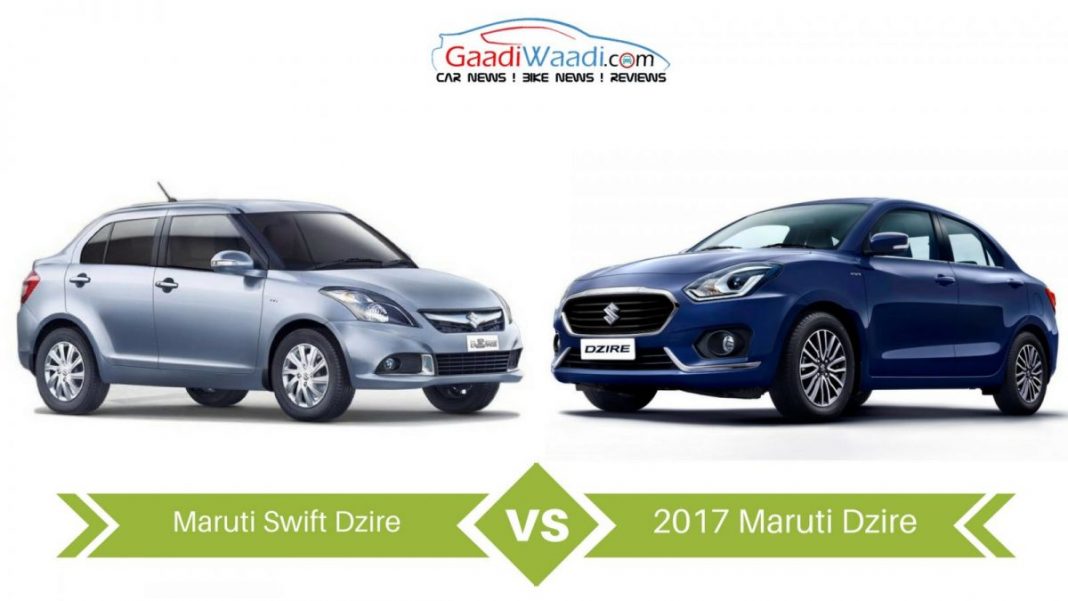 The all-new Dzire looks more stylish and upmarket compared to the outgoing model both at exterior and inside the cabin; engine options carried forward

Maruti Suzuki has finally launched the all-new Dzire with a completely new look at exterior and inside the cabin. Being the sibling of Swift hatchback from the Indo-Japanese automaker, the new Dzire borrows its design from the new-generation hatch, which is also preparing to be launched in the country, but only after the compact sedan sometime next year.

Despite overall falling sales figure in the compact sedan segment, the Swift Dzire maintained a steady sales record. With the growth of the shared ride hailing services like Uber and Ola, the popularity of the car has grown much more than before. The Maruti Suzuki Swift Dzire competes with tough rivals like Honda Amaze, Hyundai Xcent, Ford Aspire and the latest entrant Volkswagen Ameo. With the Honda Amaze already received a facelift and the Hyundai Xcent too ready to roll out in new avatar, the Swift Dzire’s new look has been much desired. 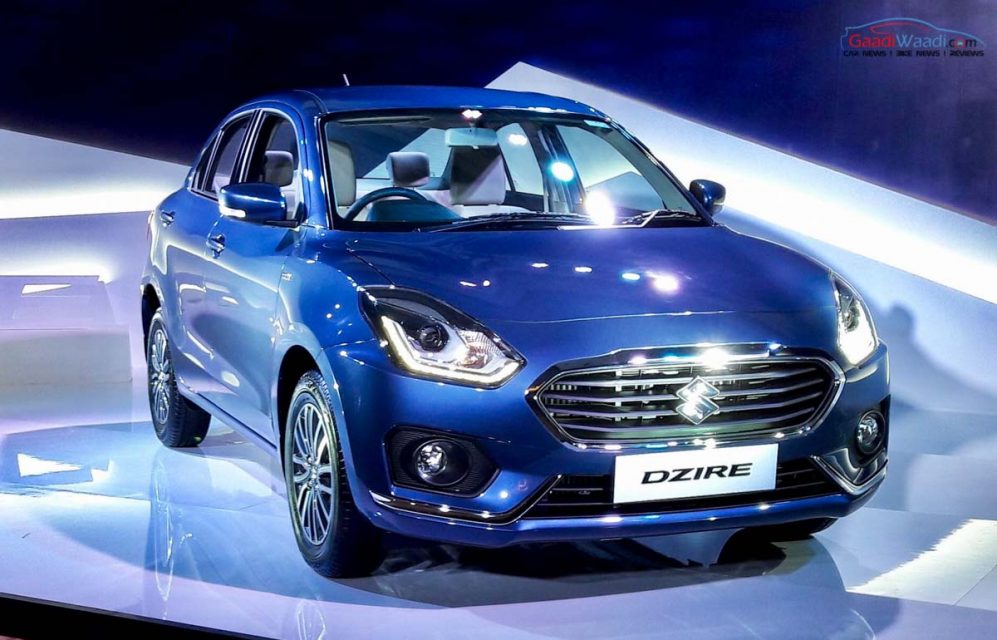 With the demands of the customers changing at a rapid pace, Maruti Suzuki needed to upgrade their bestselling compact sedan in such manner, which will attract the young age customers with its style and features. The largest automaker of India has done just that and additionally dropped the Swift moniker now. The 2017 Swift Dzire appears very much attractive compared to its predecessor. It has been equipped to cater an upmarket vibe to the occupants and is expected to help it hold the stead in its segment.

Here we make a spec-sheet based comparison between both the new and old versions of the Dzire compact sedan:

The all-new 2017 Maruti Suzuki swift Dzire comes with an attractive design compared to the current model. It sports a new revised front fascia which has borrowed design cue from the new generation Swift hatchback. However, the difference is also very much visible. It gets a completely new hexagonal front grille with extensive chrome garnishing and horizontal slats. The headlamps appear much sharper and in line with the new-generation Swift hatch and they come with integrated LED daytime running light.

The front bumper too has been revised and comes with neatly positioned fog lamps with black surrounding and highlighting chrome trim. The wide air intake with horizontal slats enhances the appeal of the car further. The new Swift Dzire sports a plain hood which gives it a smoother appearance. At the side profile too, the car gets updated look with new design alloy wheels, turn indicator integrated ORVMs and blackened glass area. The side body sports a crafted look with new character lines.

Moving to the rear of the car, the upcoming Maruti Suzuki Swift Dzire looks quite similar to its predecessor with minor changes. A set of wraparound taillights, a horizontal chrome slat running between the taillamps and a crafted looking registration enclosure and rear bumper are there. Overall, the new Maruti Suzuki Swift Dzire arrives with a very urban and modern look, which makes it very attractive compared to the existing model.

Speaking about the Old Maruti Suzuki Swift Dzire, the car gets sharp laid back headlamps and there are no LED daytime running lights, which are available in most of the cars now a days. The front grille of the car looks dated with a single wide chrome slat and there is a black wide air intake with horizontal slats at the front bumper. 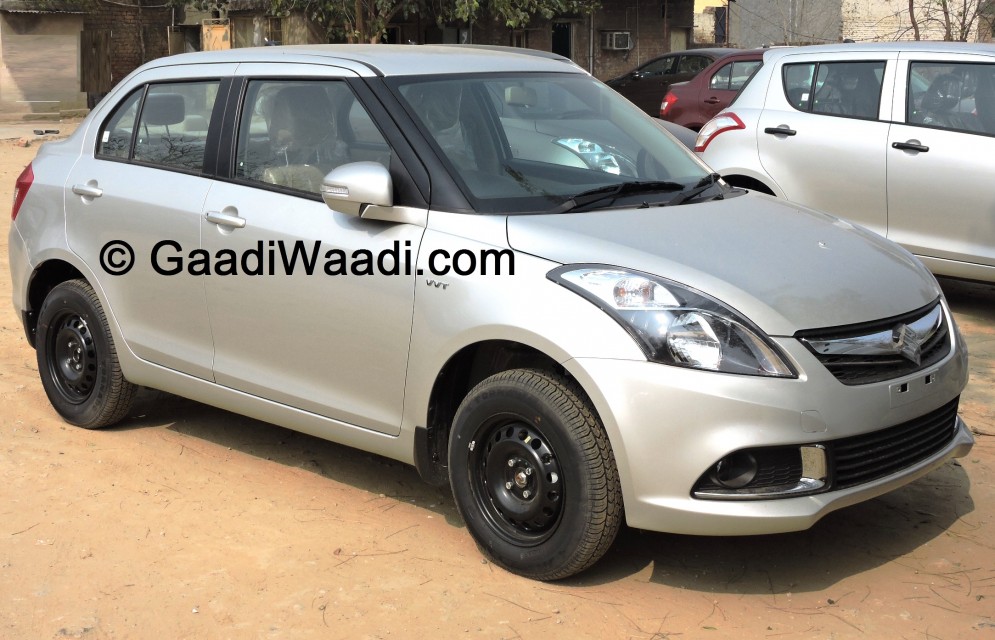 The side profile of the old model gets turn indicator integrated ORVMs, alloy wheels, body coloured door handles and slightly flared wheel arches. The blackened A and B pillar portray a floating roof design, which is something that add zing to the car. The rear profile features wrap around compact taillights with a horizontal chrome strip positioned above the registration enclosure and running between the taillights.

Since the new Dzire is based on the Baleno’s platform, the height is reduced by 40 mm while the wheelbase is increased by 20 mm. The width of the vehicle has gone up by 40 mm and it will translate into more cabin room as the shoulder room up front and rear goes up by 20 mm and 30 mm respectively. The fuel tank capacity has been reduced to 37 litres from 42 litres and the rear leg room has increased by 55 mm.

The petrol MT weighs at 860 kg and 895 kg for the petrol AMT version while the diesel MT tip the weighing scale at 955 kg and 990 kg for the AMT. Due to the significantly lowered kerb weight, the handling and driving dynamics are said to have improved by a large amount.

The ground clearance of the all-new Maruti Dzire sedan is 163 mm – 7 mm lower than the outgoing model for improved aerodynamic stability. Due to the new lighter Baleno platform it is based on, the luggage compartment has seen increase in capacity as it is at 378 litres – 62 litres more than the existing model.

When we compare the interior of the all-new Maruti Suzuki Swift Dzire with the old model, the sharp difference is visible through the design and features. The new model appears very much upmarket than the old model, thanks to its modern contemporary design and loads of practical, stylish and premium features compared to the old Maruti Suzuki Swift Dzire. 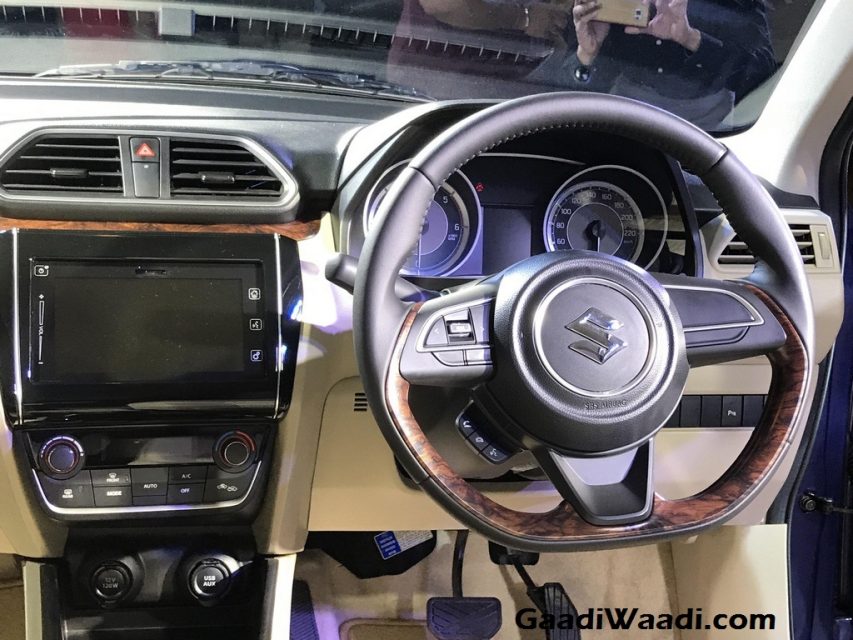 The new Maruti Suzuki Swift Dzire gets a new multi-function steering wheel with sporty flat-bottom appearance. The instrument cluster too appears new and borrows the design cue from the Swift hatchback. The dual-pod instrument cluster features both analog dials and a digital MID. At the centre console, the SmartPlay touchscreen infotainment system with Apple CarPlay and Android Auto surely enhance the cabin’s appeal further.

The circular AC vents, colour theme inside the cabin, seat and upholstery materials also help in making the new Swift Dzire very attractive and interesting than the old model. In terms of space and comfort, it will be more spacious and roomy offering the rear occupants more legroom, as we have already mentioned that the new model will come with a larger wheelbase.

While the third-generation Maruti Suzuki Swift Dzire looks very appealing inside the cabin, its predecessor comes with a dated look. It sports a dual-tone Black and Beige colour theme. Apart from that, it gets a tilt-adjustable multi-function steering wheel, dual analog dials and a digital MID at the instrument cluster.

The centre console doesn’t get a touchscreen infotainment system, which is something available in most of the cars now a days. Overall, the interior of the new Swift Dzire is very attractive and interesting than the old model, and it comes pretty much appealing as well.

On the powertrain front, the new generation Maruti Suzuki Dzire comes available in both petrol and diesel engine options like the outgoing model. The third-gen model carries the same 1.2-litre K-Series VVT petrol engine, while the diesel engine on the other hand, is the same Fiat-sourced 1.3-litre DDiS unit, which is also available in several other Maruti Suzuki cars like Ciaz sedan Ertiga MPV and Swift hatchback.

The power and torque outputs of the petrol and diesel engines remain same as well. The old model gets a 5-speed manual gearbox and a 4-speed automatic transmission on offer with the petrol engine, while the diesel engine is mated to a 5-speed manual gearbox and an AGS is also on offer. The third generation Dzire sticks with the similar transmission set ups.

Apart from the current engines, the upcoming model could get a 1.0-litre Boosterjet turbocharged petrol engine as well, sourced from the Maruti Suzuki Baleno, while an indigenously built 1.5-litre petrol engine is also on card, which would be introduced to the car later after being used and evaluated in the Ciaz sedan and Ertiga MUV.

The 2017 Maruti Suzuki Dzire comes with several modern and essential safety features. It receives dual front airbags and ABS with EBD as standard along with ISOFIX child safety system. Apart from that, other safety features would be seatbelt reminder, reverse parking camera, engine immobilizer, etc.

The current model comes with safety features like dual front airbags, ABS with EBD, reverse parking sensors etc. But those are not available in the base variants. Instead the top variant come equipped with such essential safety features. In that case, the new generation Dzire comes offering the occupants more protection. Also, it is claimed to employ a more rigid, lighter and yet protective body structure.

The old Maruti Suzuki Swift was available in a total of 13 different variants across the petrol and diesel fuel options and three different transmission options as well. It is priced between Rs. 5.35 lakh and Rs. 8.58 lakh (ex-showroom, New Delhi). 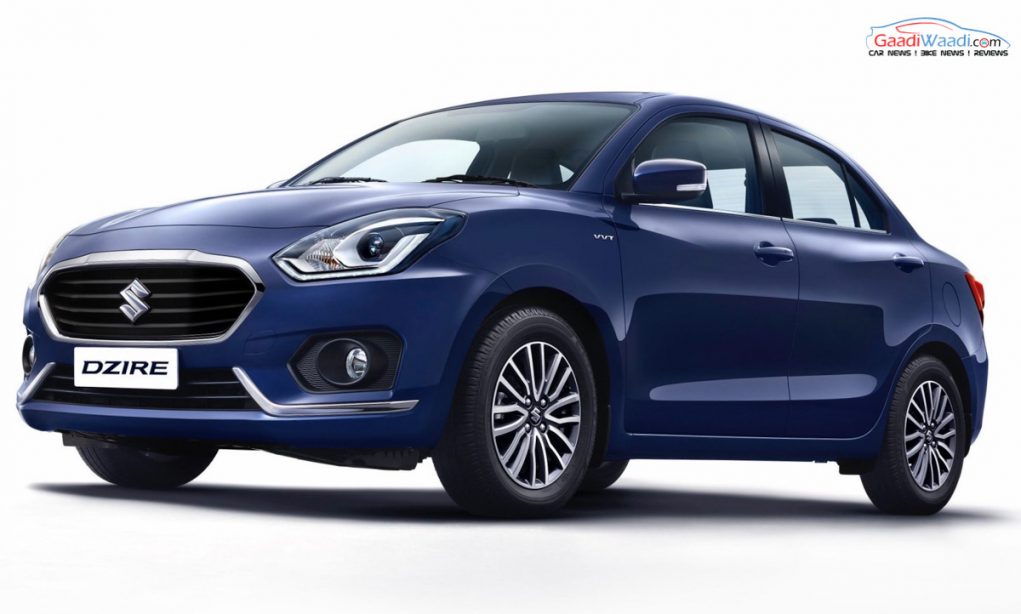 The all-new third generation Maruti Suzuki Dzire appears more attractive and more appealing with a modern and contemporary design, stylish look and certainly new upmarket features inside the cabin. The Swift Dzire is already the most popular and bestselling model in the sub-four metre compact sedan segment of the domestic market. With the rivals coming in refreshed avatar, the new generation model was due in an attempt to keep its superiority intact.

Surely, Maruti Suzuki has understood where it needs to improve and the new Swift Dzire comes accordingly prepared. Apart from keeping its superiority against the rivals in the segment, the new generation sub-four metre compact sedan leaves behind the old model far away with its new look and all other stuff it offers to the occupants. So far, with the arrival of the car, the Indo-Japanese automaker looks set to keep its supremacy intact in the segment.