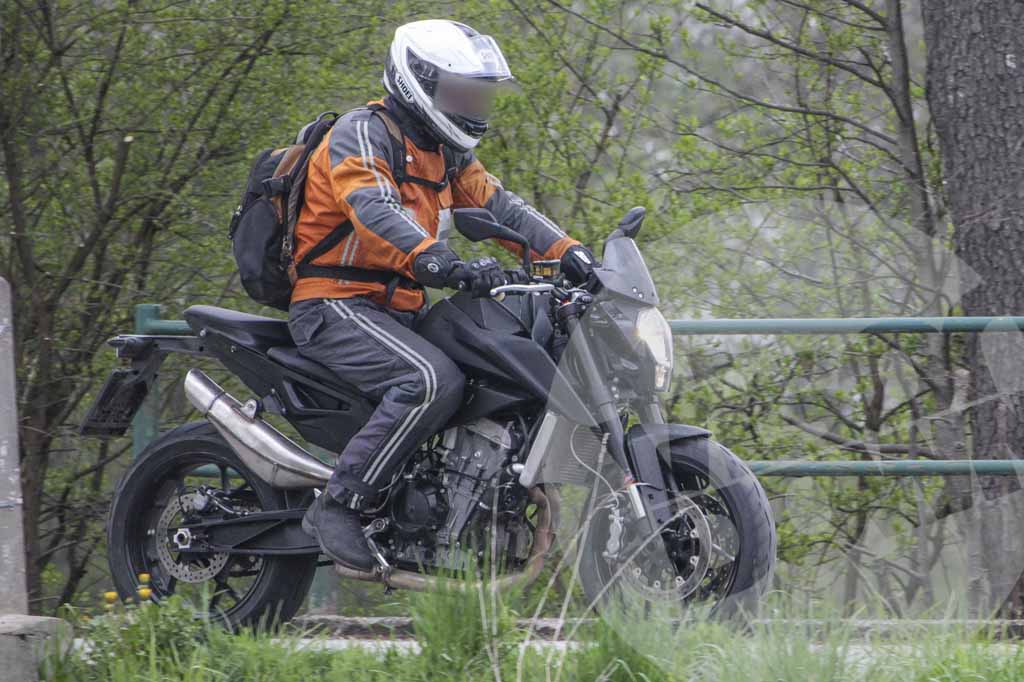 KTM Duke is expanding its range of sporty bikes fast. Rumors have been doing rounds, that the Austrian brand is developing an 800 cc bike for the Duke series. Now the bike has been spotted testing. Although it is claimed to be an 800 cc bike, but it looks smaller in size. Which also indicates, that it might be a 500 cc bike as well.

It has been known since 2014 that KTM has been developing 500 cc and 800 cc engines for Duke models. Incidentally, KTM boss Stefan Pierer indicated, that both the 500 cc and the 800 cc bikes will be manufactured in India, just like their 125 and 390 Duke siblings. The suspected KTM Duke 800 looks sharp like its smaller siblings we seen on Indian roads. The prototype spotted testing was painted in black. Expect the production spec model to get white and orange contrasting colour theme. The headlamp looks sharp and aggressive, while the massive fuel tank also boasts a very muscular appearance. The bike will get a fully digital instrument cluster. It also comes with the uplifted split seats, high mounted muscular exhaust barrel.

The bike will get power from an 800 cc engine, which might come similar like the V-Twin engines powering the Ducati and Triumph Scrumblers. The parallel twin engine would churn out around 100 to 110 hp of peak power. The 1290 cc engine of the Duke is well capable for tough off-roading duty, but comes with massive weight. Also read: 2016 KTM 1290 SuperDuke Adventure Imported to India, to be Displayed At Showrooms?

Eventually the rider starts feeling the weight of the bike after riding some time. In case of the Duke 800, it will generate enough power to capable the bike to race and do some off-roading tasks as well. Additionally it comes much lighter than its bigger sibling. On the braking front the KTM Duke 800 is fitted with twin front disc brakes, a single disc at the rear wheel. On the suspension front the bike sports upside down forks, alloy swing arm. The KTM Duke is already available with several different engine displacements like 125 cc, 390 cc, 690 cc and range topping 1290 cc for the Super Duke R. Now with the 500 cc and 800 cc it seems KTM is planning to offer a whole range of bikes to the world.