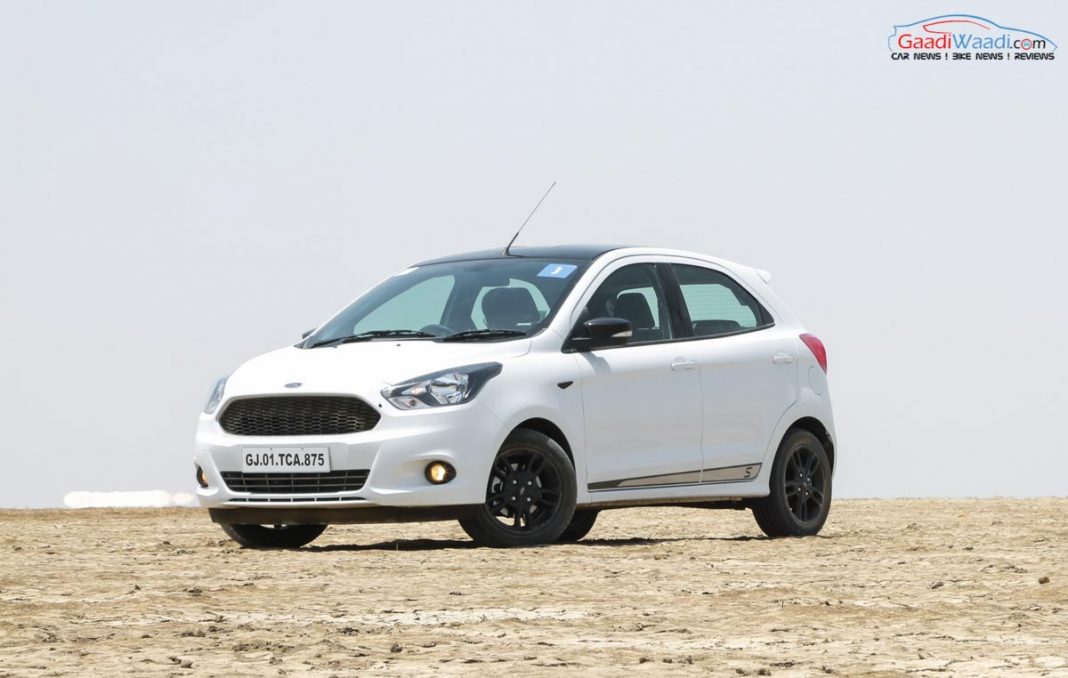 Ford Figo Sports Review : In the last few years, the trend of performance-oriented cars in India has been growing steadily – be it the Mercedes AMG or the BMW M Sports lineup in premium segment, and just a few days ago Volvo brought its S60 Polestar on to the floor. In the much accessible volume space, Maruti recently took the love for performance cars of the buyers to an all-new high by launching the Baleno RS.

Ford also didn’t waste much time and launched the Sports variants of its existing compact models – Figo and Aspire – as the big push aims at increase in sales as well as nostalgic driving dynamics the American brand is pretty well known for in India with the old Fiesta and Figo. Last year, Ford introduced the second generation Figo and it is a completely different take on its predecessor. 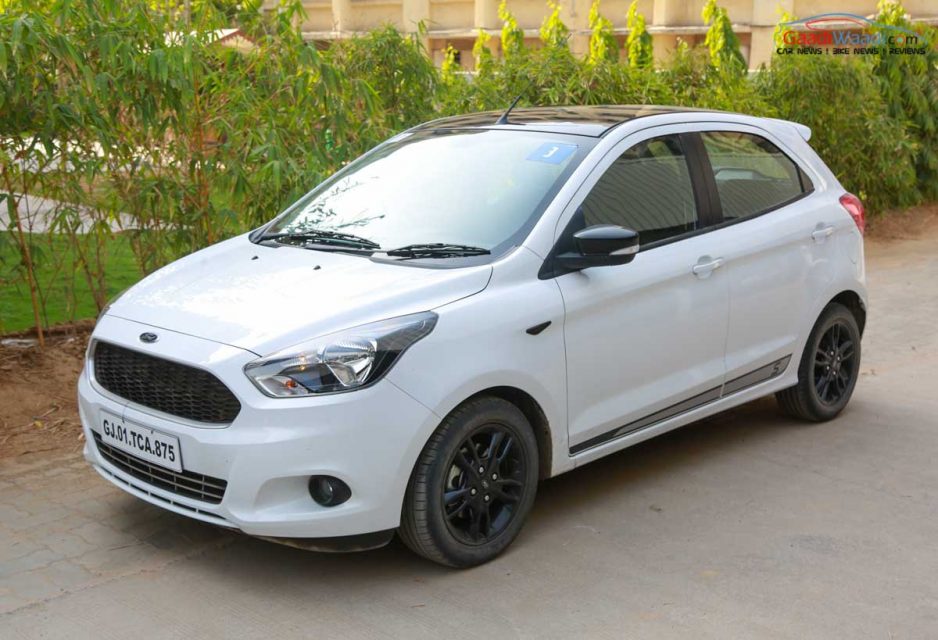 The new Figo was launched at a very affordable pricing as a more powerful and attractive car. Despite that, it couldn’t fetch the sales result as Ford would have expected but its capability cannot be questioned whatsoever. Now, the Ford Sports has entered with 11-12 changes and the sedan version Aspire received 6-7 tweaks on the Titanium variant. Both the offerings make Ford’s Indian lineup – already consisting of cars like Mustang, EcoSport and Endeavour much more attractive.

Let us talk in detail about the Figo Sports version as we are fresh off driving it at the Little Rann of Kutch in Gujarat. We maneuvered the Figo Sports 1.5-litre diesel in the scorching 47 degree temperature of Rann to bring you the first drive review report down below:

Let’s begin with the design of Figo Sports. Dimensionally, it appears exactly same as the regular hatchback but Ford has introduced many noticeable changes. 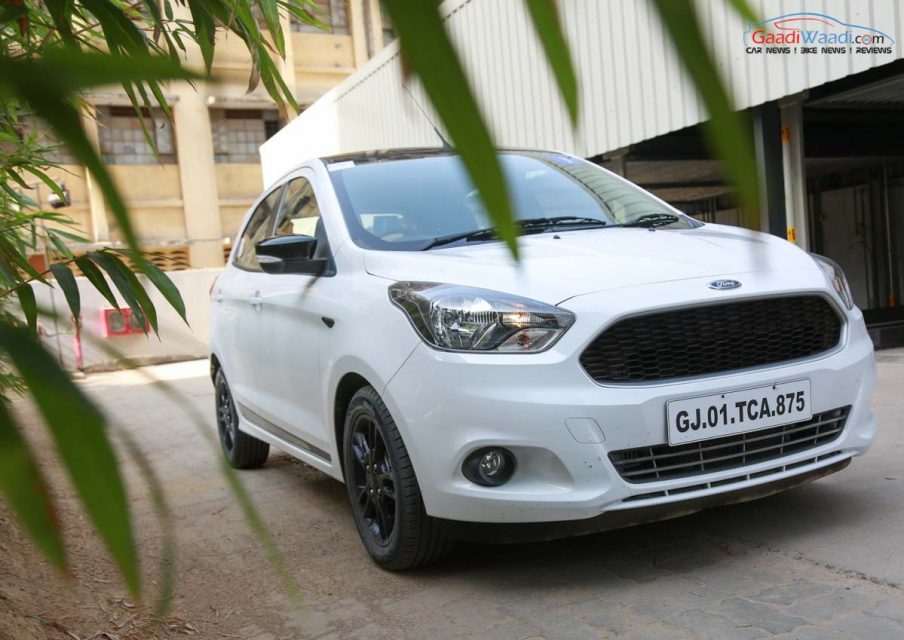 Up front, the Figo Sports has received an all-Black honeycomb grille and the headlamps get Black bezel around them – giving the car a sporty look and alongside making it pretty attractive. The Figo Sports variant gets fog lights as standard as it is based on the Titanium variant.

If you glance from the front, the roof appears black and it has been done so keeping in mind the demands of the contemporary buyers. On the other hand, the black Figo Sports has gained a white painted roof. However, DRLs are not available in the Sports variant. 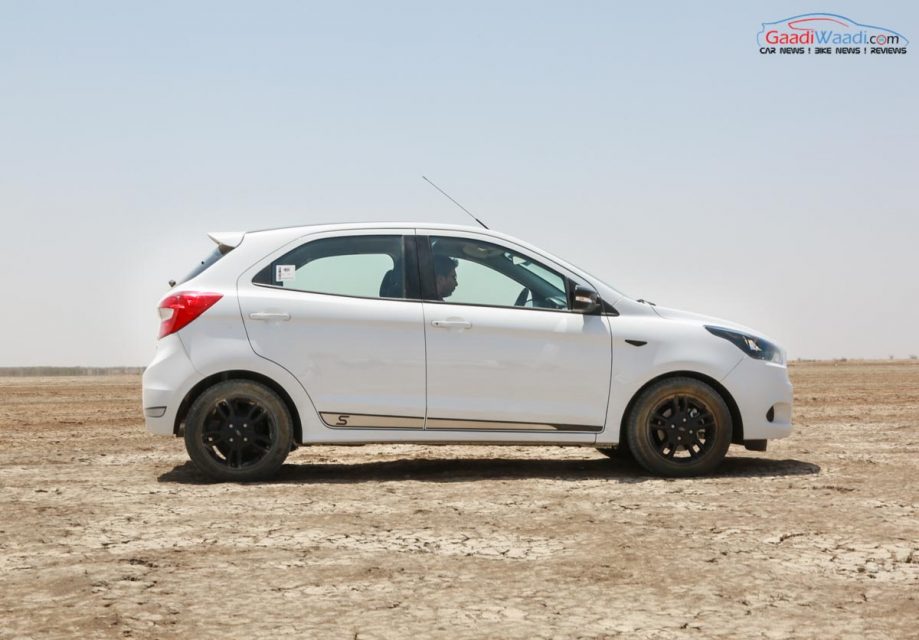 It is a bit of a disappointment because as much as the dual-tone body colour, it is an essential feature modern customer will often look for. But, thanks to the availability of aftermarket DRLs, you wouldn’t have to worry too much.

At the side profile, with 3-4 small changes, the Figo Sports has become pretty sporty. First noticeable update comes in the form of a 15-inch Panther Black alloy wheels, which gets 195/55 section tyre delivering a low-profile racing look. Probably due to the new suspension, gap between the car’s body and tyre appears very little. 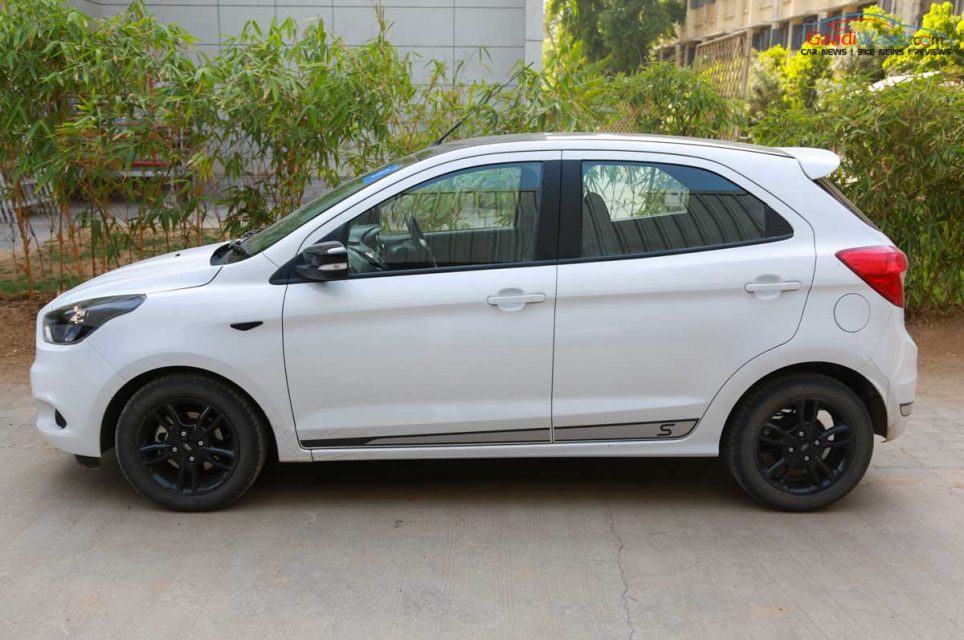 The ORVMs come available in dual-tone paint in the Sports variant, with the Black Figo Sports getting White ORVMs and the vice versa. Doors don sporty decals while the rear spoiler accentuates the mean appearance. 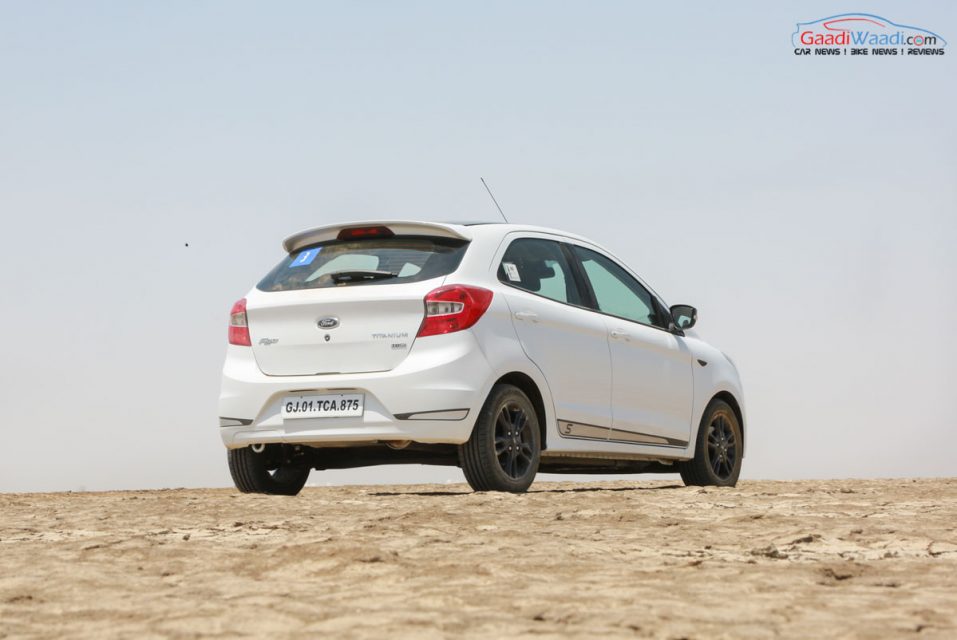 Going to the rear, the bumper gets sporty decals that give the already beautiful stock design a bit more sporty look. But the performance focused buyers will surely feel the lacking of “S” or “Sports” emblem at the back. The Ford Figo Sports measures 3,886 mm in length, 1,695 mm in width, 1,525 mm in height and has a wheelbase of 2,491 mm as the standard compact sibling. 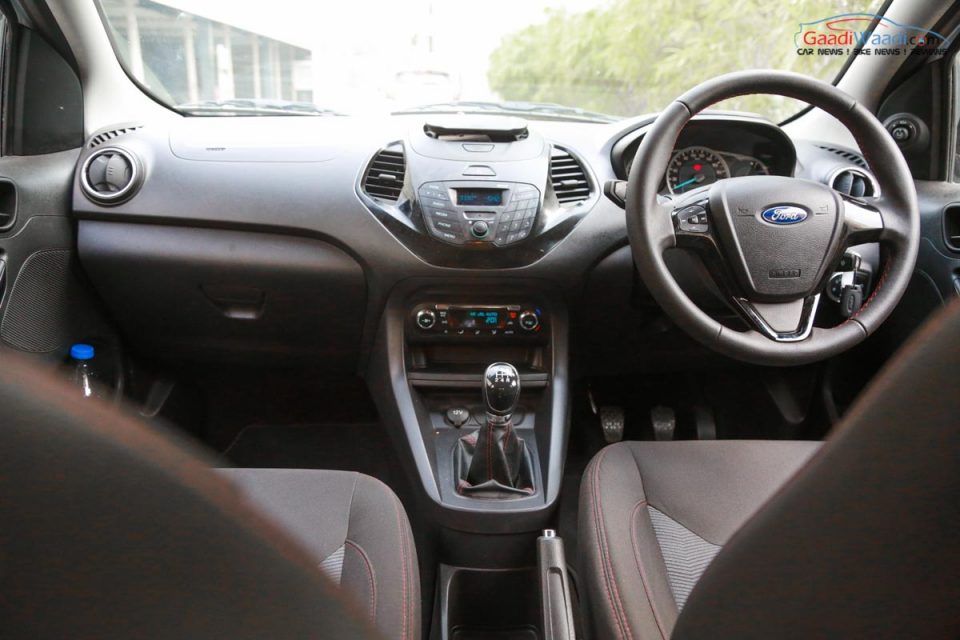 Ford Figo Sports’ interior has received some conventional changes in an attempt to become all-black, which include the black painted inner door handles, music system bezel and steering wheel bezel compared to the silver colour in the regular model. To give it a sporty feel, the steering receives leather wrapping and it offers a good feel and grip. Apart from that, red stitching on the seats make it attractive compared to the normal Figo. 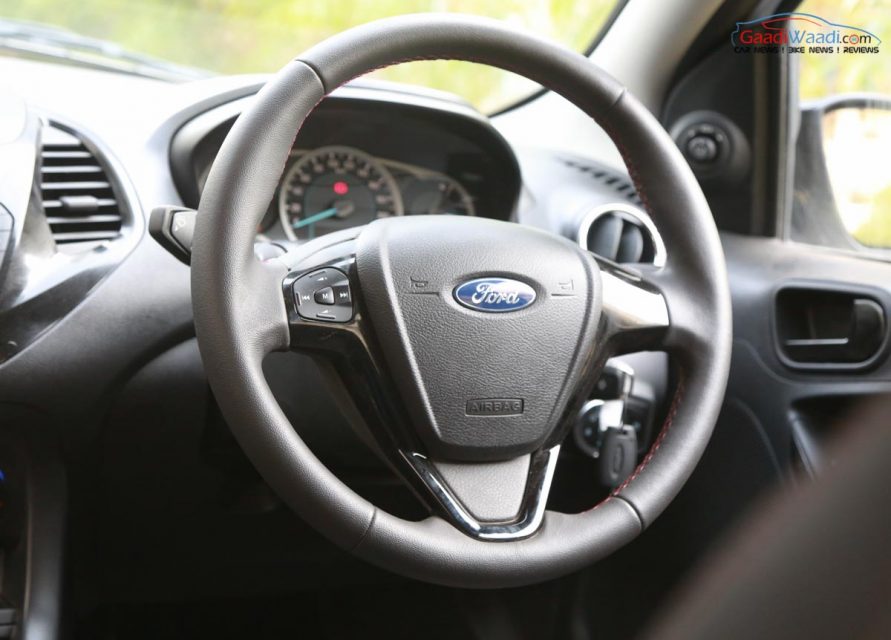 Unlike the exterior, Ford has not extensively upped the interior game by introducing sporty pedal set and touchscreen infotainment system. Instead, they pursued with subtle changes that help compound the overall “Sports” theme. If we talk about features, the Figo Sports is based on the Titanium variant and it comes with height adjustable driver seat, Ford MyDock music system with USB and Bluetooth, Automatic AC, steering wheel mounted audio controls, electric adjustable ORVM, dual front airbag and ABS. 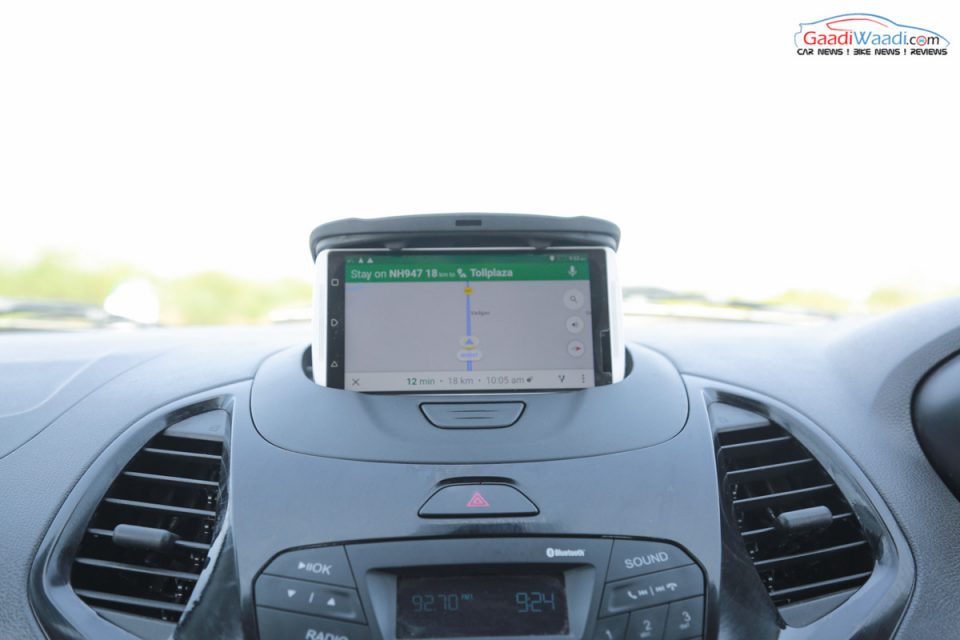 Absence of touchscreen music system can be felt for sure, but to keep the Figo Sports affordable understandably it has not been introduced. Okay now, when will your smartphone with 5-inch screen come to use? There is Ford MyDock, just use that.

Both the Figo Sports and the Aspire Sports have been launched with the stock 1.5-litre TDCi diesel and 1.2-litre Ti-VCT petrol engines as the regular model. In the oil-burner, 110 PS of peak power and 215 Nm of massive torque output are churned out and the petrol motor kicks out 88 PS of power and 112 Nm of maximum torque. 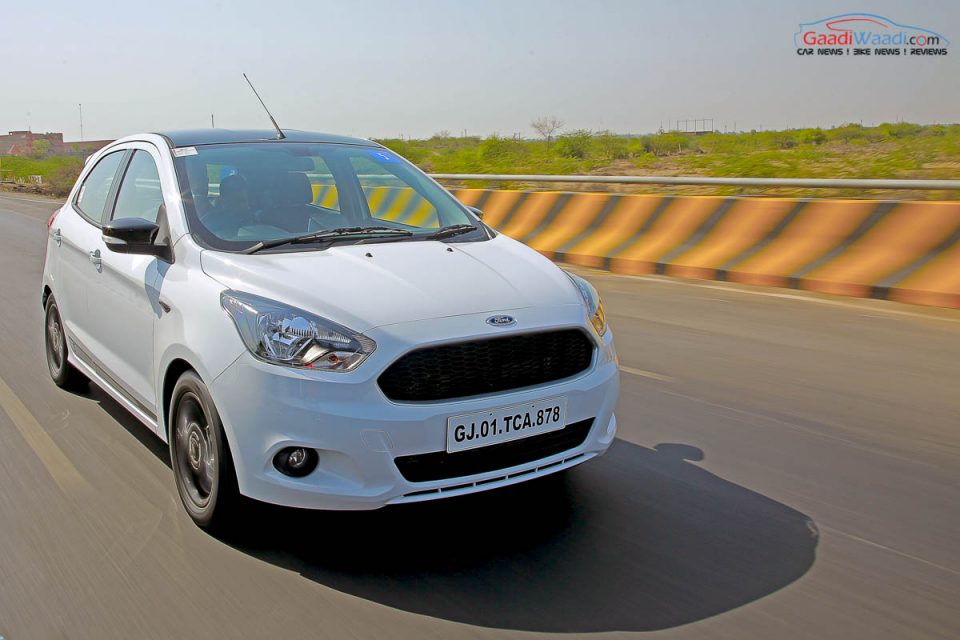 Performance wise, the Sports variant is better suited for the 1.5-litre diesel engine and fortunately Ford gave us the 1.5 diesel model to have a spin at. This 1.5-litre motor is so amazing that our readers voted it as the Best Driver’s Car (Budget) at the 2016 GaadiWaadi Awards.

And Ford did not make any change to the engine of the Sports version gracefully. This engine is very punchy and fun to drive, be it on the city roads or on the highway. Even we took this car to Rann of Kutch to drive and it easily reaches the speed of 140 kmph and in competition it offers best 0-100 kmph performance. On the highway, I managed to touch the 175 kmph mark with ease. 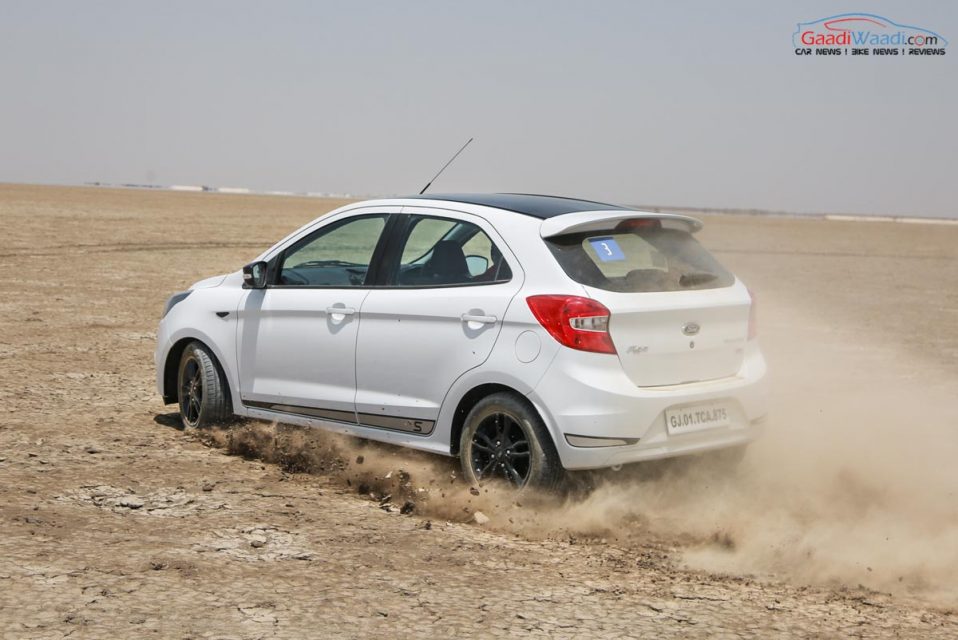 In the mileage front too, surprisingly I managed to get above 17 kmpl. So, finally Ford has given the Sports badge to the Figo twins with perfect tradeoff between performance and fuel economy. When you put the foot down, it does enthrall you by going fast but when you really want to coast around, it delivers miles.

The sole reason for which the cost of Figo Sports edition goes up is the new suspension, which has also added 20 kg to the kerb weight and the vehicle’s ride height is now resultantly decreased by 5 mm to remove the uneven bounce and to make the springs stiffer. The improved driving dynamics is mainly due to the new sports suspension that plays a significant role. 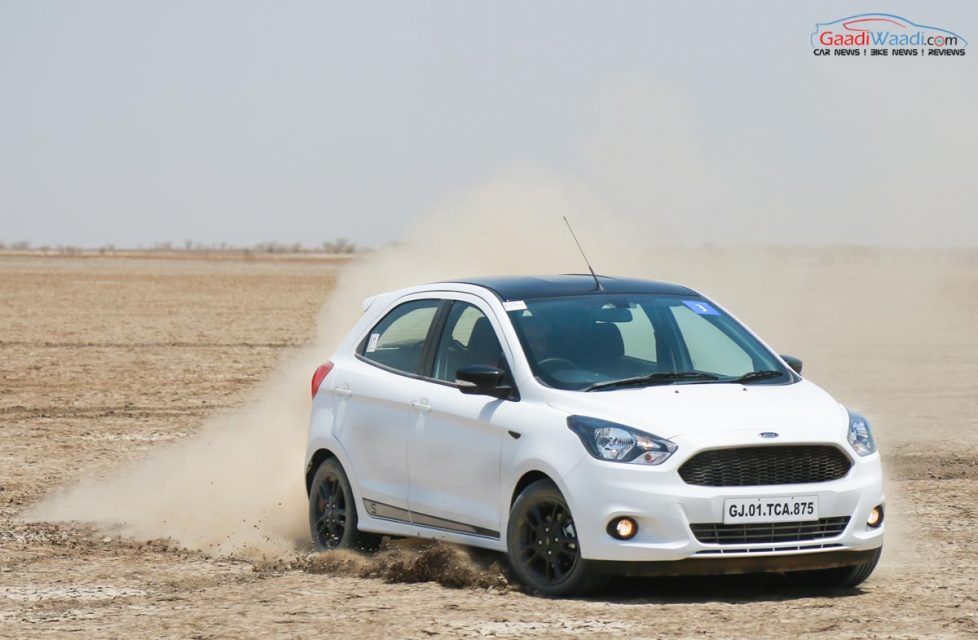 It absorbs minor to major bumps very easily providing good comfort and confidence even at high speeds. But, the absence of the rear disc brakes can be felt while playing hard with this machine on the tarmac. Despite the lowered ride height, Ford has been able to keep the ground clearance unchanged as the Figo Sports comes with 15-inch tyres instead of 14-inchers. 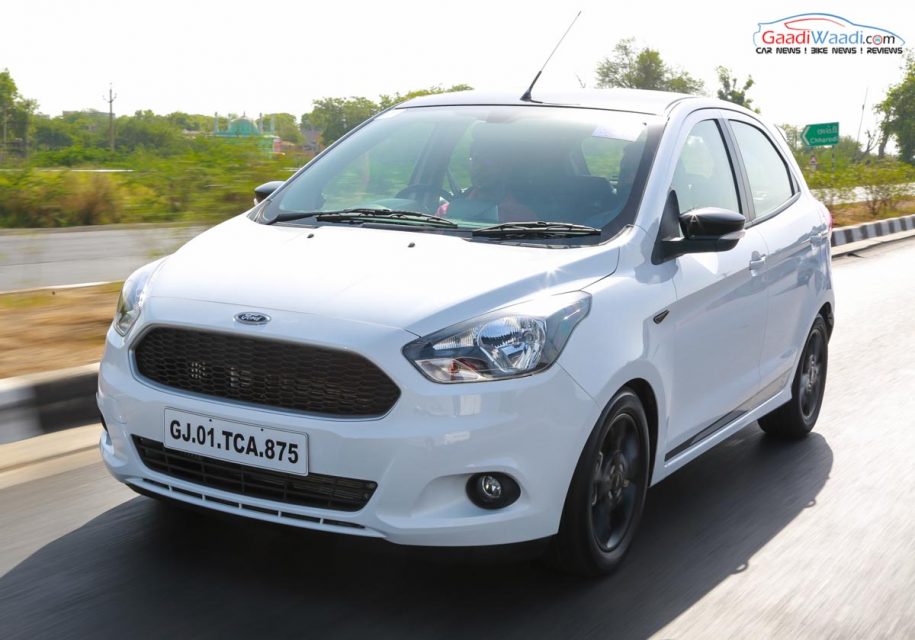 The Figo Sports runs on a set of 195/55 wider rubber and it offers better grip and stability, However, ultimate result show that there is a marginal decrease in mileage due to the 20 kg additional weight and 20 mm increase in tyre’s rolling resistance.

On the steering front, Ford has kept the same steering adjustment as in the regular Figo, but it could have been more adaptive for performance oriented drivers. With lesser body roll, more contact patch on road due to wider and taller tyres and the signature driving thrill Ford offers, you will be tempted to pursue after the Figo Sports as much as you wanted to own an old Fiesta 1.6 S. 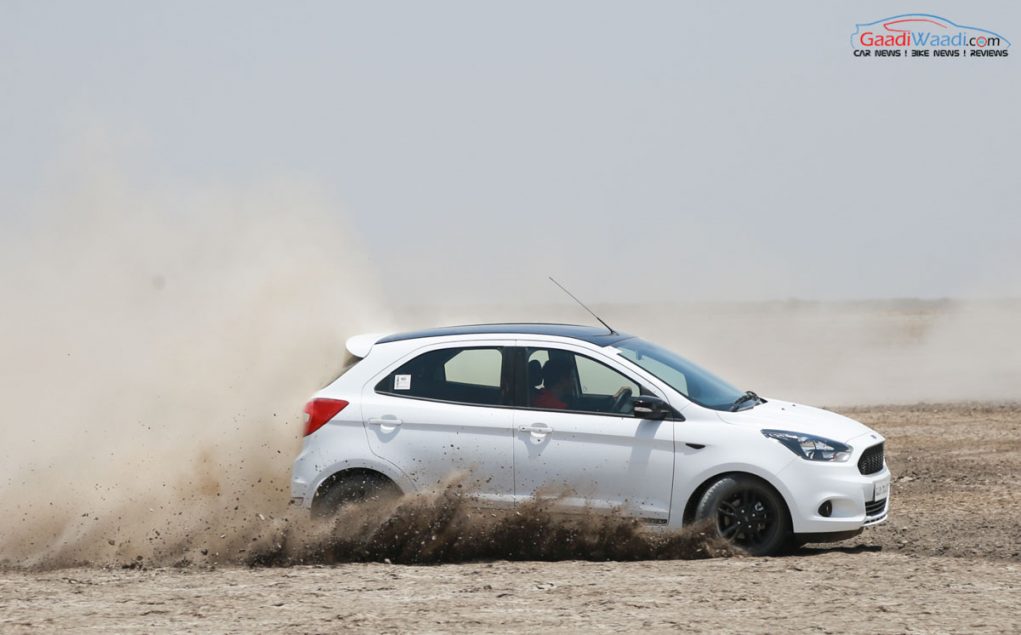 Since you are spending 45k-50k over the regular Figo, the improved driving dynamics totally justifies the premium and don’t forget that you are getting dual-tone colour and sporty exterior as well. 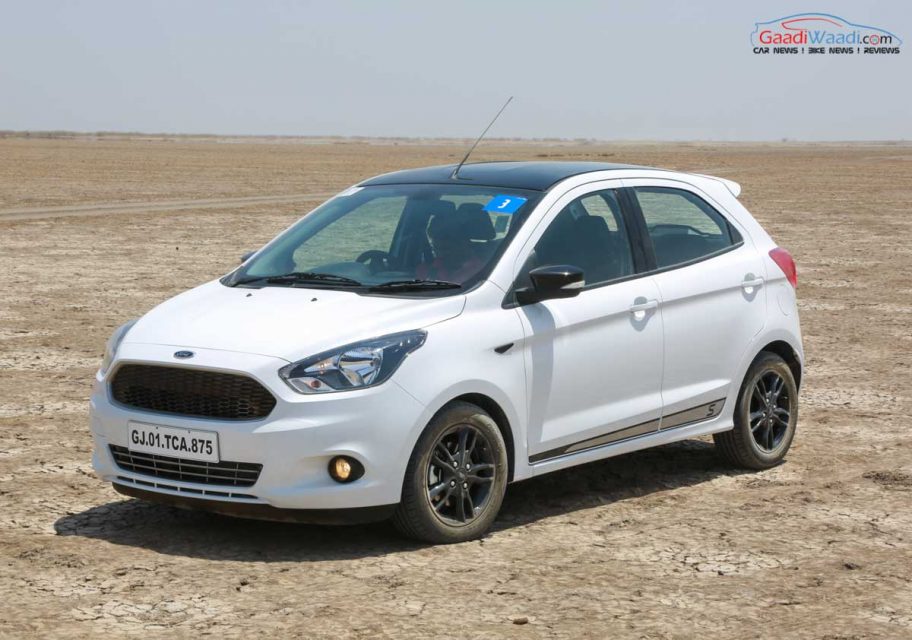 So, should the extra 40k over the regular titanium worth the spend? Yes is the answer we would love to say. For this premium, all you get are a much improved handling and riding dynamics courtesy of the sporty suspension along with an attractive dual-tone exterior and all black interior. The blackened 15-inch alloy wheels with wider tyres provides better stability, good grip and add quite a flavour to the overall design.

The most important part for car buyers in India is the maintenance a Ford will incur and it is no more that costly as you would have heard before 5-6 years. 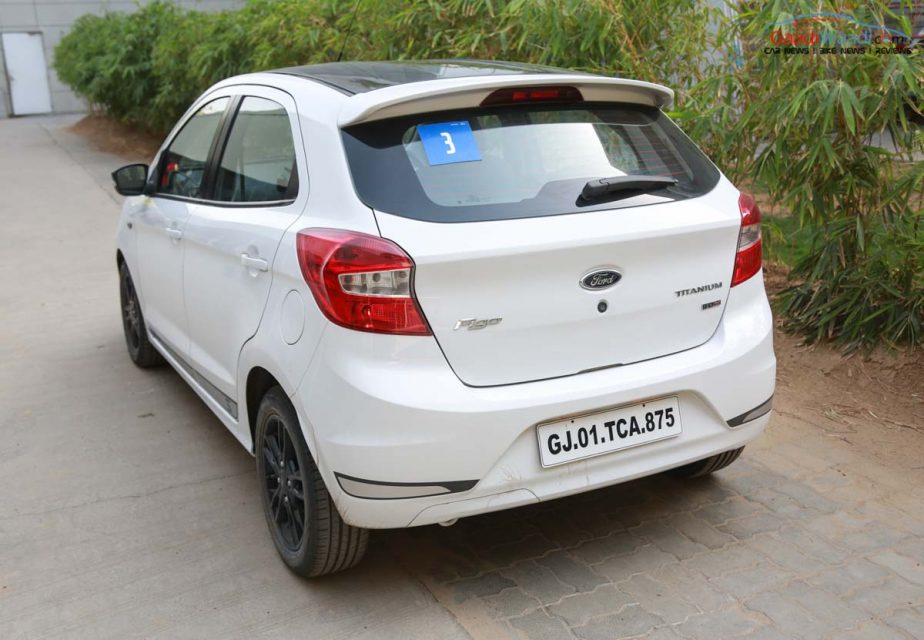 Yes, the Figo is surprisingly affordable not just for buying but for in terms of after sales and service as well. The maximum service cost is just at Rs. 6,253 once in 1,00,000 km while all other service will cost at an average of just Rs. 4,000 every 10,000 km.