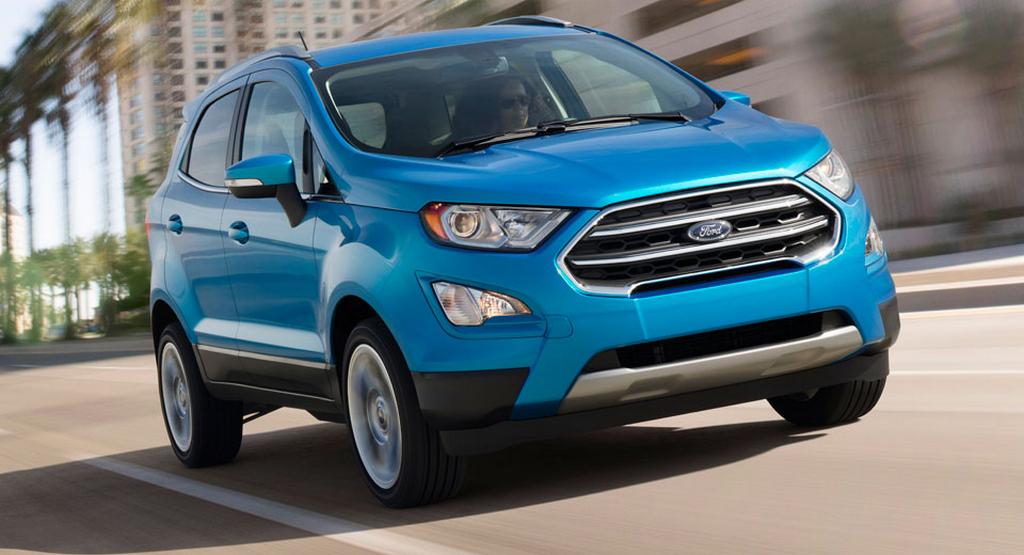 The facelifted version of the Ford EcoSport sub-compact SUV was revealed at the 2016 Los Angeles Auto Show. Set to arrive in US in Q1 2018, it will be the positioned lower than the Ford Escape and is going to be the smallest SUV to be offered there.

It has adapted design cues from the current generation Ford Edge and it appears that the Blue Oval will slowly be expanding the entry of the new facelift into the developing markets. It retains the tail-gate mounted spare wheel with similar overall design as in the US-spec version for markets like India and China.

Also Read: Ford Figo Sports Launched in India – All You Need to Know 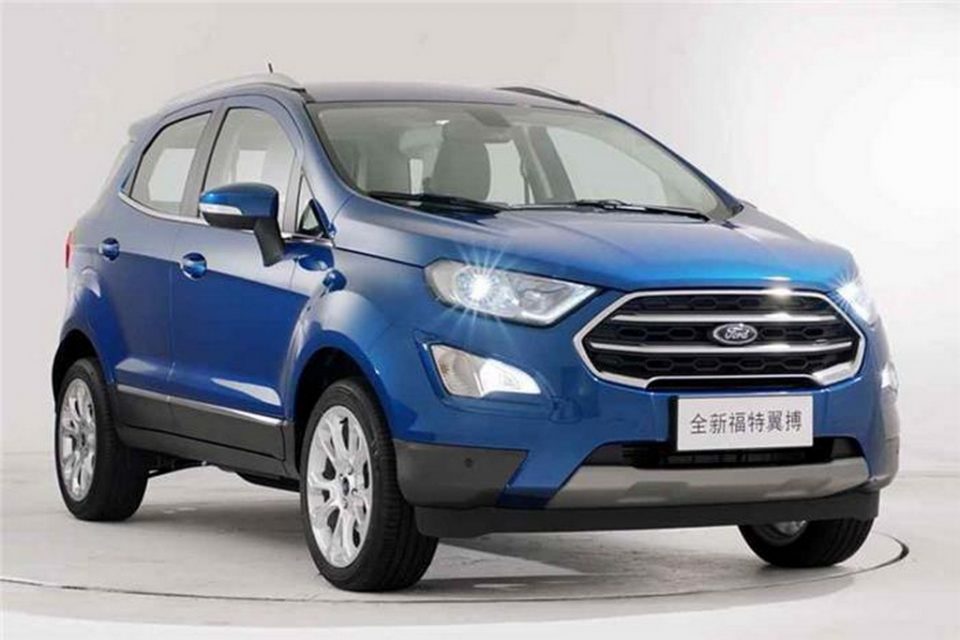 The facelift is manufactured at Ford Brazil’s plant in Camacari. The EcoSport, which has global significance for the brand, is one of the highly appealing vehicles for Ford worldwide and also in India.

The best-selling product for the American manufacturer has loads of importance in our market but its global reach cannot be undermined as Ford reaps new sales targets courtesy of this compact and capable SUV. 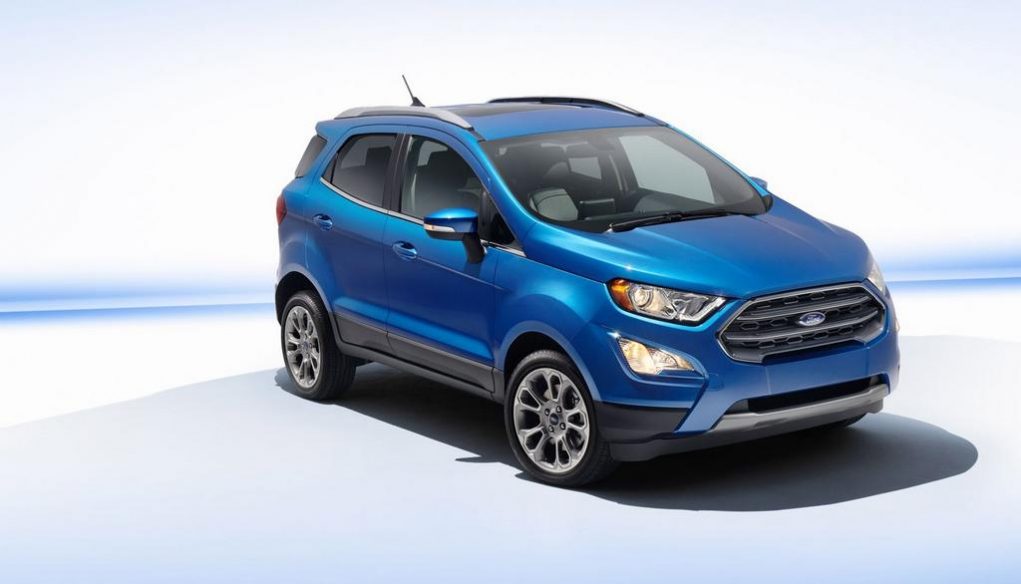 Ford claims that localisation levels have gone up from 65 percent to 80 percent as the EcoSport is said to offer spare class-leading ownership with spare parts costing 40 percent less than rivals. Here’s everything you need to know about the 2018 Ford EcoSport facelift from Indian buyer’s perspective:

The world premiere was hosted at the 2016 LA Auto Show before going on sale late last year. The EcoSport is the brand’s best-selling model in our domestic market and it was launched here with plenty of anticipation.

Offered in a massive 18 trims levels, the outgoing EcoSport had a price of Rs. 7.31 lakh for the entry level Ambiente variant and Rs. 10.99 lakh (both ex-showroom Delhi) for the range-topping Platinum diesel edition. There was hardly any change in pricing for the facelifted model surprisingly at the launch. But due to the yearly price revision, it has gone up by over Rs. 30,000 for some variants.

The Ford EcoSport facelift won’t have the same award-winning 1.0-litre EcoBoost turbocharged engine for India as it has been retired. The transmission options will continue to be a standard five-speed manual or a six-speed dual clutch automatic transmission. Ford has included the 120 bhp producing 1.5-litre Ti-VCT naturally-aspirated three-cylinder Dragon petrol engine, from Latin American market, for India. The 1.5-litre TDCi diesel continues to feature in the facelifted model as well. However, more markets will get four-wheel drive system on top-spec trims which mean if introduced in India, it could become the cheapest AWD on offer in the later stages. The existing 1.5 diesel continues to be mated with a five-speed manual while the new diesel gets standard five-speed manual and optional six-speed auto.

Ford has re-located the production of Euro-spec EcoSport from India to Romania as over €200 million is being pumped into Craiova Assembly plant. For US market, customers will be able to opt for either a 1.0-litre three-cylinder turbocharged engine or a larger 2.0-litre four-cylinder motor. While no technical specifications of these engines are announced yet, Ford confirmed that the 2.0-litre mill will be paired with a four-wheel drive system as standard. Both powertrains will be coupled with six-speed automatic transmissions.

Ford’s existing diesel powertrain was already fuel efficient, thus there is only minor tweak in economy with the 1.5-litre Dragon petrol returning 17 kmpl by being 7 percent frugal than the outgoing petrol engine. The 1.5-litre TDCi is claimed to have fuel consumption of 23 kmpl.

The 2017 Ford EcoSport facelift measures more or less similar to the outgoing version. It currently has length of 3,999 mm, width of 1,765 mm, height of 1,708 mm with 2,520 mm wheelbase. Tipping the weighing scale at 1.2 tonnes, Ford could lower the kerb weight for improved handling and increased frugality. The bootspace capacity will likely remain at 346 litres besides having a fuel tank capacity of 52 litres.

The new EcoSport has a matured design language keeping the existing overall silhouette intact as the exterior will bear influences of the current generation Kuga and Edge. The compact package will be underlined by revisions to headlamps with sleeker LED Daytime Running Lights and projector lamps, enlarged trapezoidal radiator grille with dual slats and black plastic mesh pattern, Edge-inspired fog lamps, redesigned bumpers at front and rear and a new tail lamp cluster design.

While the side profile is kept almost similar, the styling inspiration it will derive from the larger Edge has been influential as it now looks sharper and modern. The signature tail-mounted spare wheel will be continued at least in the Asian-spec EcoSport while there will be a new set of alloy wheels as well but the US-spec model will have tyre inflator kit instead without the spare wheels. The global reach of the EcoSport is further substantiated with exterior changes as they appear conventional and likable. The current Ford EcoSport set benchmark in the sub-four metre compact SUV segment three years ago but it was largely capitalised by the Vitara Brezza as it the current leader in that particular space. While the facelifted EcoSport will have to deal with the unrelenting popularity of the Brezza, it will have to deal with the Honda WR-V and Mahindra TUV300 along with the highly promising Tata Nexon.