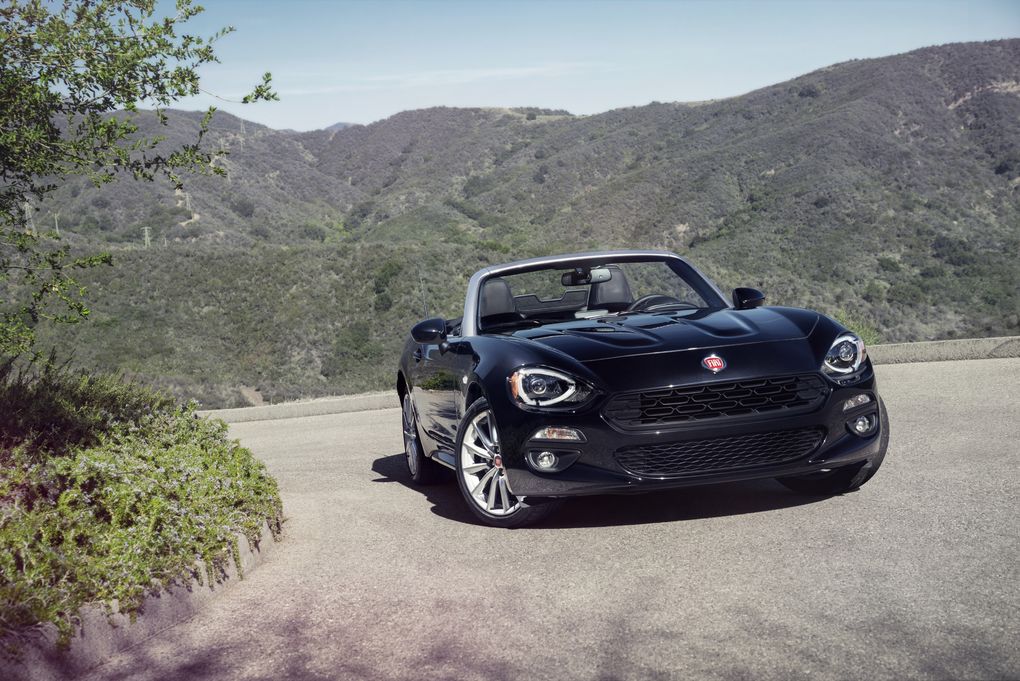 2017 Fiat 124 Spider, the turbo-engined sporty roadster, made its debut at the LA Motor Show, based on Mazda MX-5.

As part of the joint venture between Fiat and Mazda, the Fiat 124 Spider and the Mazda MX-5 it will be derived from will be manufactured at Mazda’s facility in Hiroshima, Japan. The new Fiat 124 Spider will take advantage of component sharing between the two models thus the wheelbase and lightweight chassis remain identical.

Based on fourth-generation Mazda MX-5, the most significant changes were made to the front-end with a noticeably longer bonnet, hexagonal grille, curved-in bumper and revamped LED headlamps. It’s in similar proportion to BMW Z4 and at the rear gets rectangular oval Fiat Signature LED tail lamps. The seagull wings scoops inwards towards the bootlid and twin exhausts substantiate the roadster’s sporty outlook. On the inside, every dial and switch look identical to MX-5 with a similar seven-inch colour display.

An Abarth version of the Spider could arrive sooner with beefier suspension, aggressive styling and bigger brakes to cope with the 200 plus horses. Considering that the standard MX-5 has just 129bhp and does 0-62mph in 8.9 seconds, a 200hp+ version could spawn a genuine rival for Porsche Boxster. But as for now, Fiat has opted to go with 1.4-litre turbocharged MultiAir petrol engine lifted from 500 Abarth instead of Mazda’s 1.5 and 2.0-litre naturally-aspirated engines. The Spider’s roof is hand-operated and no electric option is available.

With 138bhp power and 240Nm of torque paired with a six-speed manual transmission, the Fiat 124 Spider is likely to be faster than the MX-5 whilst a more powerful 160bhp version will be up for grabs in the US initially. Offered standard are Bluetooth and USB connectivity, six speaker stereo in addition to Sat-Nav system, DAB and reversing camera. The Fiat 124 Spider will be up for sale in Britain during the latter half of 2016 and expected to be priced around £20,000 as it will sit in the middle of 1.5 and 2.0-litre engine options from Mazda MX-5.