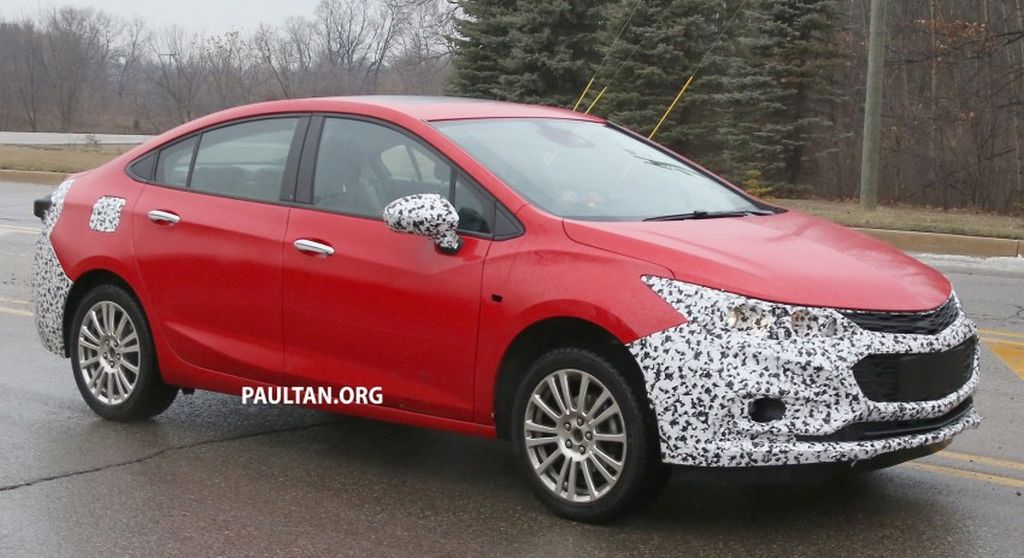 2017 Chevrolet Cruze Hybrid spotted testing; could get a 1.8-litre petrol coupled with a twin electric motors for better fuel efficiency

GM revealed the second generation Chevrolet Cruze global sedan with a heavily revised styling and updated engine line-up in June 2015. The 2017 Chevrolet Cruze was spied testing in Germany last month and courtesy of Paultan.org the alleged test mule of the Cruze Hybrid was found almost undisguised in Michigan.

Expected to debut sometime this year internationally, the Cruze could carry a similar hybrid powertrain system as that of the Malibu Hybrid. The 1.8-litre four-cylinder petrol is coupled with two electric motors that does duty on the Chevrolet Volt and has a 1.5 kWh lithium-ion battery pack. The petrol engine and electric motors combine to produce a power of 182 hp and the car can hit a top speed of 86 kmph on full-electric mode. The 2017 Chevrolet Cruze has stronger construction based on the D2XX FWD platform and more aerodynamically sculpted. The interior comprises of larger MID system on the instrument cluster, a seven-inch MyLink infotainment system and multi-spoke steering wheel.

The exterior styling changes include revised flog lamps, hexagonal air-inlets, angular headlamps with LED daytime running lights and horizontal tail lamps, restyled side view mirrors and sporty bumper. For U.S., the new-gen Cruze gets power from a 1.4-litre turbocharged engine with start/stop technology pumping out 153hp and 240 Nm of peak torque. Power is transferred to the front wheels via six speed manual or automatic gearbox. It can hit from 0 to 100 kmph in eight seconds. The Chevrolet Cruze facelift about to be unveiled at the Auto Expo 2016 will have minor cosmetic changes. At the front fascia, a new chrome finished grille is expected with LED DRLs and revised styling touches to the rear although not very comprehensive, with added equipment list. As for the interiors, the dashboard remains unaltered whilst a new seven-inch MyLink touchscreen infotainment system with Apple iPhone/iPad Siri support, provisions for reverse parking camera and bluetooth telephony will be lifted from the new Trailblazer SUV. The 2.0-litre turbocharged diesel engine, first introduced in 2012, will continue to generate 166 PS maximum power and 360 Nm of peak torque coupled with either a six-speed manual or an automatic transmission. It will rival the likes of Toyota Corolla Altis, Skoda Octavia, Renault Fluence and Hyundai Elantra. The facelifted model will buy GM some space to bring in a new-gen global Cruze to Indian market by 2017.
Source: Paultan.org