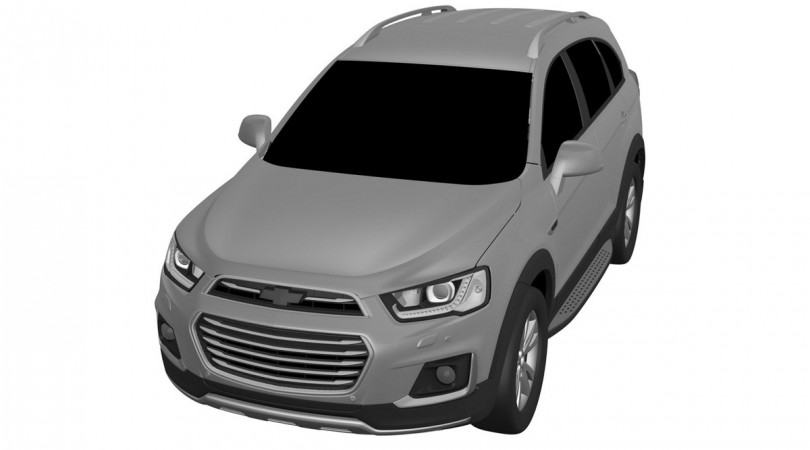 GM is banking on every possibility worldwide to get it sales high. The fight with Toyota and Volkswagen is as always intense and nail-biting numbers distinguish them every single time. To do this, worldwide sales figures have to increase and in a midst to that, it wants to cash and revive all products that it already has while working on new models that are set to come soon. The company has recently patented on what has to be the most comprehensively facelifted Captiva in recent times.

On the face of it we can see it has headlights, with LED lights, projector headlights and re-furbished grille. The new tail lamps are also LED units and should add to the cool quotient. The side profile remains the same and overall silhouette remains identical. The SUV should get new alloy wheels to make things better. Interior isn’t seen here but should have an attractive color scheme all around. The 2017 Chevrolet Captiva patent images show very clear signs that it could be easily slotted below the TrailBlazer with less equipment and a detuned engine as it was an impressive product but the price in India was high. If getting down the food chain in the same stable works, Captiva could do decent numbers as all premium SUV manufacturer have something in that category (below their flagship SUV) and Captiva could start making a lot of sense. The current Chevrolet Captiva is powered by a 2.2-litre diesel engine which churns out 186.5 PS of power and 400 Nm of torque. The motor is mated to a 6-speed manual and an automatic gearbox as option extra. Captiva has been available with Both FWD and AWD variants. If GM gets the FWD variant with a detuned engine from the Cruze, and price it around 20-21 Lakh, it could see a boost in sales with fairly aggressive marketing.