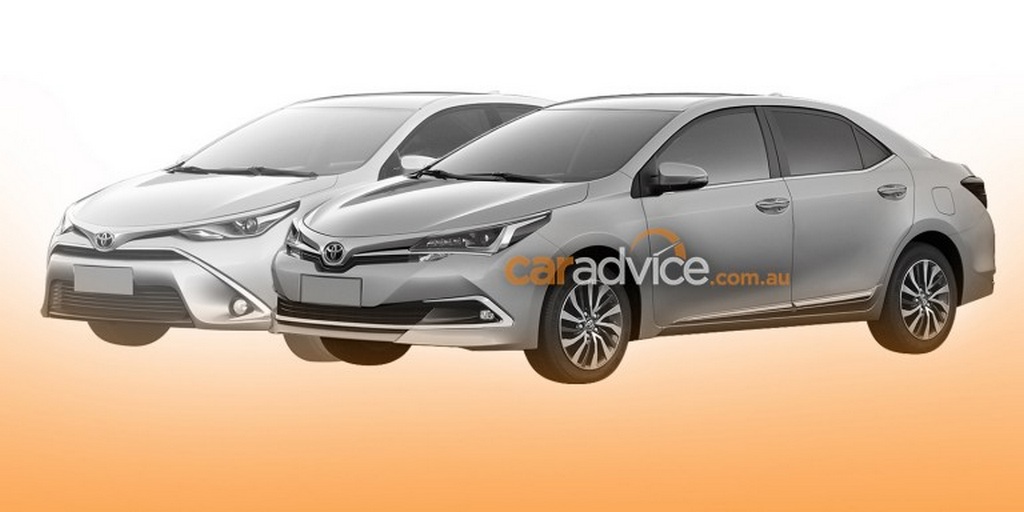 Patented pictures of the 2016 Toyota Corolla Altis sedan have surfaced on the internet thanks to a reader of CarAdvice. The images reveal that it could be the facelifted version of the executive sedan that rivals against Hyundai Elantra, Skoda Octavia, Chevrolet Cruze, Renault Fluence and Volkswagen Jetta. The Japanese manufacturer launched the eighth generation Corolla Altis as the most affordable model in the competitive executive sedan segment back in 2014.

The patented photographs emerged on the website of the European Union trademark and patent office give a comprehensive idea at the revised styling details of the Japanese model. The current generation of the best-selling sedan in the world has been doing good sales figures in India bettering its competition as Toyota retails on an average of over 600 units every month which is far ahead against the sales of the Skoda Octavia, Hyundai Elantra and VW Jetta.

The leaked sketches reveal the identical design of the existing Corolla sold for the Chinese market as HEV and petrol-hybrid variants. The hybrid Corolla was first showcased outside Japan at the 2015 Shanghai Auto Show and it features sharper styling updates and new taillamps with a 99hp 1.5-litre Atkinson cycle engine coupled with an electric motor.

The model on the left-hand side of the first image could be the US-spec Corolla whilst the one on the right is most likely the international-spec or the Corolla Altis facelift for Indian market. The 2016 Toyota Corolla Altis facelift could feature sharper airdam with stretched-out round foglamp cluster, new projector pointed headlights with strike-through LEDs, slender twin-slat chrome grille, new multi-spoke alloy wheels, chrome garnish on doors and lower bumper, revised taillamp clusters, etc.

The details of the mechanical changes are not known yet. The existing model gets power from a 1.8-litre 2ZR-FE inline four-cylinder petrol engine which develops power output of 138 hp and 173 Nm of peak torque. A CVT variant is offered as a top-end VL AT petrol variant with paddle shifters. The 1.4-litre D-4D diesel engine with Variable Nozzle Turbo and Intercooler produces 87 bhp and 205 Nm of torque. It is paired with a six-speed manual transmission only.
Source: CarAdvice