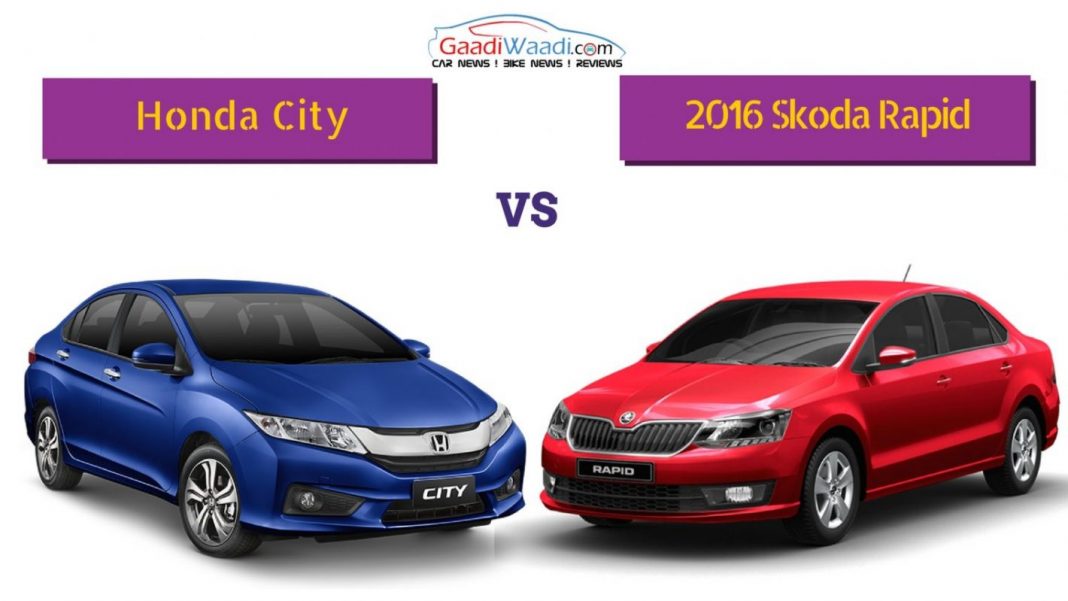 Skoda has launched the Rapid facelift with updated exterior and interior, takes on popular Honda City with close pricing

Czech automaker Skoda has launched the Rapid facelift in India, which dons new style at exterior and new features inside cabin making it more upmarket and appealing. The Rapid facelift comes with an updated TDI diesel engine, while a 7-speed DSG automatic transmission has been introduced as well. Altogether the new Rapid looks pretty much attractive than pre-facelift model.

Skoda Rapid sits in the segment where Maruti Suzuki Ciaz and Honda City have very strong presence. While Honda City has been the most popular mid-size sedan in Indian market for quite long time, Maruti Suzuki snatched the show with its Ciaz sedan lately. Skoda Rapid on the other hand has been in Indian market for around half a decade, but the car is yet to capture an impressive sales figure. By launching the Rapid facelift, Skoda wants to give both Maruti Suzuki Ciaz and Honda City tough competitions. In An attempt to do so, new Skoda Rapid comes more similar like its European version which dons the global Skoda design language. Compared to Honda City, the new Skoda Rapid looks pretty attractive indeed.

Honda City looks a bit dated in comparison to its rival with its styling. Though the popular mid-size sedan manages to sell around 6,000 units on an average monthly, but there is no denying that sales figure has been declining for this car. With arrival of Skoda rapid Honda Car India has every reason to be intimidated.

Skoda has kept Rapid facelift’s pricing in such manner, which gives clear indication that it wants to throw tough challenge to Honda City. Both the cars are priced between Rs. 8.22 lakhs and Rs. 12.55 lakhs (ex-showroom, New Delhi), which intensifies the competition between these two cars. Here we will take a look at spec-sheet based comparison between Skoda Rapid and Honda City. Skoda Rapid facelift takes influence from its other siblings like Octavia and new Superb. Also the newly launched Skoda Rapid facelift dons a styling, which is in-line with the company’s new age global models. The car gets sharper headlamps with LED daytime running lights, revised front grille with vertical slats and sleek chrome garnishing as well. The front bumper also sports a new look with wide air intake sporting honeycomb mesh and a horizontal slat running through the middle, and the rectangular fog lamps come enhancing its style further.

The bonnet gets sharp creases on it, while the car also sports revised fenders. Side profile of the Skoda Rapid features sharp character line running from behind of headlamps to the taillights. Apart from that multi-spoke alloy wheels, turn indicator integrated ORVMs, blackened glass area has increased Rapid’s appeal. Rear fascia of the car comes with revised bumper and sleek chrome strip on boot-lid. Honda City on the other hand comes with a strong road presence. It sports wide and sleek headlamps, Honda’s signature thick chrome bar on front grille with the company logo at centre. The front bumper looks muscular with the air intake and blackened fog lamp enclosures. Also the bonnet dons sharp lines on it increasing the car’s visual appeal further.

At side profile Honda City gets five-spoke alloy wheels, sharp cuts and creases, blackened glass area, chrome finished door handles and a nicely curved roofline; which altogether makes the car quite appealing indeed. At rear Honda City sports wide wraparound taillights, a chrome strip running between the taillights, muscular bumper and a shark fin antenna as well. So far, in terms of design both the cars appealing in their own way. But Skoda Rapid facelift looks much sharper, which certainly gives it an edge over its rival. Dimensionally speaking, the Skoda Rapid measures 4,386mm in length, 1,699mm in width, 1,466mm in height and it also gets 2,552mm of wheelbase. The car appears with a ground clearance of 168mm. Skoda Rapid’s kerb weight is 1,145 kg, and it comes with 460-litres of bootspace and the fuel tank capacity of 55-litres. Like exterior the 2016 Skoda Rapid has received changes inside the cabin as well. It has been updated to deliver a more upmarket and stylish look. Skoda Rapid gets a multifunction three-spoke steering wheel, dual analog dials and a digital MID at instrument cluster, dual-tone dashboard. The top-end trim of Skoda Rapid comes with a MirrorLink touchscreen infotainment system, which certainly has increased the visual appeal inside the cabin of the car.

Apart from these, the Honda City gets rear AC vents, a sunroof and plenty of space offering comfort to the occupants. These things certainly helped the car in being popular when it comes to being upmarket, but with arrival of Skoda Rapid facelift it seems Honda City is about to face tougher competition now. So far Skoda rapid’s interior looks much more stylish and appealing than Honda City.

The Skoda rapid comes available in both petrol and diesel engine options. Rapid petrol draws power from a 1.6-litre MPI engine churning out 104 bhp of peak power at 5,250 rpm and 153 Nm of peak torque at 3,800 rpm. The engine is available with both 5-speed manual and 6-speed automatic transmission options. The petrol MT and AT models deliver fuel economy of 15.41 kmpl and 14.84 kmpl respectively.

On diesel front the Skoda Rapid gets power from an updated 1.5-litre TDI diesel engine which is also available with a 5-speed manual and 7-speed DSG automatic transmission. We have seen this same diesel engine and DSG automatic transmission in the Volkswagen Ameo as well. This engine kicks out 108 bhp of peak power at 4,000 rpm and 250 Nm of peak torque at 1,500 rpm. The diesel MT and AT models return 21.13 kmpl and 21.72 kmpl of fuel economy respectively. The Honda City is also available in both petrol and diesel engine options. Honda City petrol draws power from a 1.5-litre engine belting out 117 bhp of peak power at 6,600 rpm and 145 Nm of peak torque at 4,600 rpm. The engine is mated to a 5-speed manual transmission, while there is a CVT on offer as well, which is available SV and VX trims. The Honda City petrol delivers fuel economy of 17.8 kmpl.

Honda City diesel gets power from a 1.5-litre engine mated to a 6-speed manual transmission. This engine is capable to kick out 99 bhp of peak power at 3,600 rpm and 200 Nm of peak torque at 1,750 rpm. This car also returns impressive 26 kmpl of fuel economy. In terms of styling, Skoda Rapid facelift looks much more stylish and sharper compared to Honda City. The interior features of the Rapid also come pretty impressive and far more upmarket than Honda City. The new age customers want as much as possible from their cars rather than just a medium of commuting, and surely Skoda has done a really good job with the new Rapid facelift.

On powertrain front as well, the Skoda Rapid facelift comes quite impressive with its powerful and efficient petrol and diesel engines, manual and automatic transmission options. Though Honda City offers a bit better fuel economy, but that could be downplayed as the Skoda Rapid offers much more on other aspects. Also the little difference in pricing will surely help the Rapid to eat some market share of the Japanese mid-size sedan.