2016 KUV100 Xplorer Edition is the go anywhere version, cosmetically indeed, of the newly launched KUV 100 which adds more punch to the SUV

Mahindra is known to make SUV. The company decided to go even further and make SUV in every segment, where there sedan, it gave an SUV and now where there is a entry-level hatchback, there is an SUV. The KUV 100 is exactly an entry level hatchback on very high stilts and looks like a proper Mini SUV.

After launching it and getting a positive response from all-ends, the manufacturer has decided to make things even more purposeful, presenting the new KUV 100 Explorer which is an pumped version, cosmetically, of the KUV designed to make things more rugged in terms of looks. 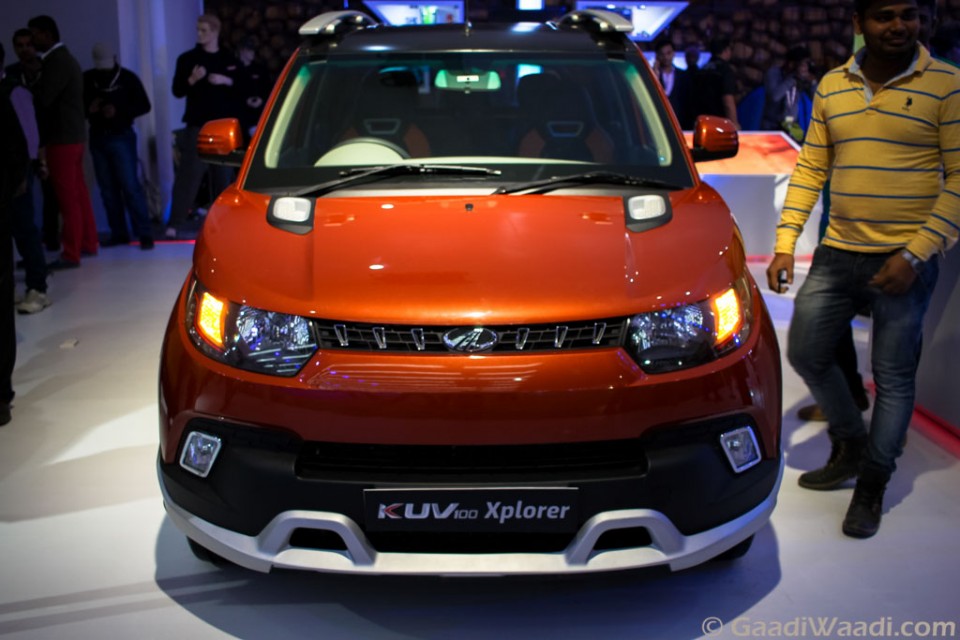 The Xplorer version of the KUV100 gets all around body cladding from the front to the rear which include the side profile too. There is ‘KUV100 Xplorer’ badge behind the swept back headlamps as side decals. More black cladding on the roof as a part of the roof rails. The front airdams also have black cladding to contrast with the grey bottom lip spoiler-ish piece. The grey treatment extends to the side skirts and the rear bottom lip as well, with the bumpers getting new creases and lines. The KUV100 Xplorer also gets fresh black body cladding inspired cluster on the tail light. On the inside the interior is exactly the same with no changes to the dashboard, seats or steering or anything else. It continues to get the dashboard mounted gear lever, 6 six seat option, same fabric upholstery along with endless cubby holes. The color chosen for the job was the signature orange color seen on its elder sibling, the XUV 500, which was also standing coupe form right in front of the KUV 100. Engine wise, it continues to get the same petrol and diesel engine which are branded under the falcon series. The 1.2 petrol and diesel engines are high of efficiency, low on emission and are downside units in terms of diesel while the petrol is all new.