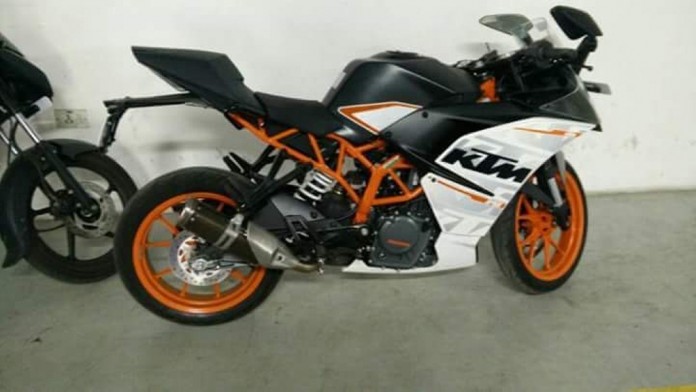 2016 KTM RC 390 Spotted in India for the first time since global debut, since there is no KTM stall at Auto Expo launch should happen some time later

2016 KTM RC 390 has turned out to be even more interesting and tempting than the original one. As if the RC 390, when launched didn’t excite the enthusiast with its potential value and performance.

The 2016 gets a good amount of mechanical updates to make sure the motorcycle stays updated in the market and meets governments emission norms. However, RC 390 remains cosmetically the same and has few changes that we discussed before.

2016 KTM RC 390 gets Ride by wire throttle to make sure fuel is fed properly and more precisely than before and the emission go down and fuel efficiency stays intact. There is a heat box that absorbs heat from the engine is a part of the Euro 4 norms. The new exhaust canister seen which replaces the old under belly exhaust is purely down to meet emission norms as well. Paint scheme remains the same but the under belly box type fairing, which used to scrape has been redesigned.

2016 KTM RC 390 Spotted in India remains the same as before when it comes engine. However, the gearbox get’s a new slipper clutch just like its naked siblings. Clutch and brake levers are now adjustable, a complain which very few have made as it does not fall to hand. New 320mm disc rotors along with the lever should make things much more better for initial bite of the brakes.

Expect refinement changes that were made to 2015 KTM Duke 390 such as spark plug changes, rubber mountings to exhaust and shorter throttle play to come in the RC 390 as well. Power stands at 43.5 BHP and torque is 35 Nm from the 373.5 cc engine. Launch as we said should before Auto Expo or after it as KTM has no stall at the event.