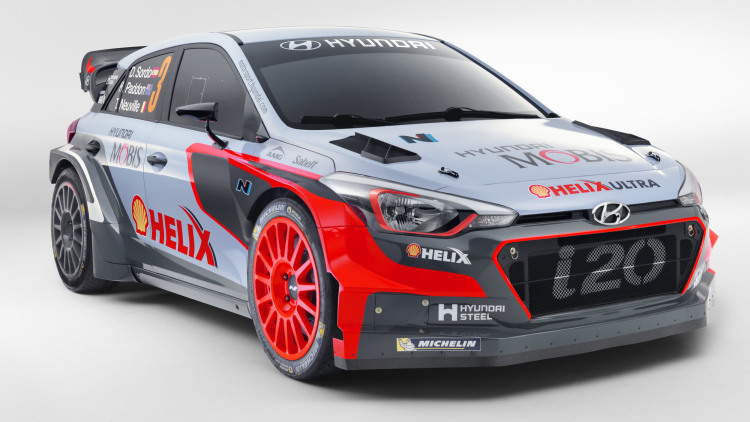 Hyundai has taken wraps off its “New Generation i20 WRC” at a launch event in the team’s factory in Alzenau, Germany. It will contest the 2016 World Rally Championship season starting from a competitive debut at the historic Rallye Monte-Carlo in January.

The team retained lead drivers Thierry Neuville, Hayden Paddon and Dani Sordo as a three car assault will be made on all but one of the 14 WRC rounds next year with the new rally car. Kevin Abbring will be entered in selective championship rounds but his majority of work will be focussed on development of Hyundai’s WRC2-spec R5 car for customers and on the 2017 WRC rally car. It will be used for a single season before the WRC rules are revamped for 2017. The South Korean manufacturer conducted around 8,000km of testing with the new i20 after having abandoned a previous plan to debut it in 2015.

The delayed New Generation i20 WRC was showcased in a motorsport-based livery at the Frankfurt Auto Show early in the year. The car was expected to be based on the three-door i20 model, however, Hyundai Motorsport announced in April that it would be delayed due to a hold-up in the production of the road vehicle. Therefore, the German-based squad switched its focus to the five-door Elite i20 version. Hyundai went into 2015 with Neuville and Sordo as lead pair in its Shell-branded entries but ended up shuffling drivers with second string Mobis-branded line-up as Paddon showed impressive pace by leading in Sardinia and then Neuville’s form took a sudden dip.

Hyundai Motorsport boss Michel Nandan said the team will be flexible in 2016 on who to field in its lead cars. Of the three, only two of the new i20s will be entered in the season-opening Monte Carlo Rally before all three rally cars appear for the second round in Sweden. Hyundai secured its maiden WRC victory at the 2014 Germany rally where Neuville and Sordo came home first and second but it was unable to repeat the form this season and lost out to citroen narrowly in the battle for second in the manufacturers’ championship amidst scoring four podium finishes.

Hyundai says the car has proved to be quicker than its predecessor in testing with drivers Thierry Neuville, Dani Sordo and Hayden Paddon praising the improved drivability despite wary that a similar performance hike is expected from main rival manufacturers Ford with its WRC Fiesta, Citroen with DS3 WRC car, and the ultra-quick Volkswagen who dominated 2015 with Polo R WRC machines.