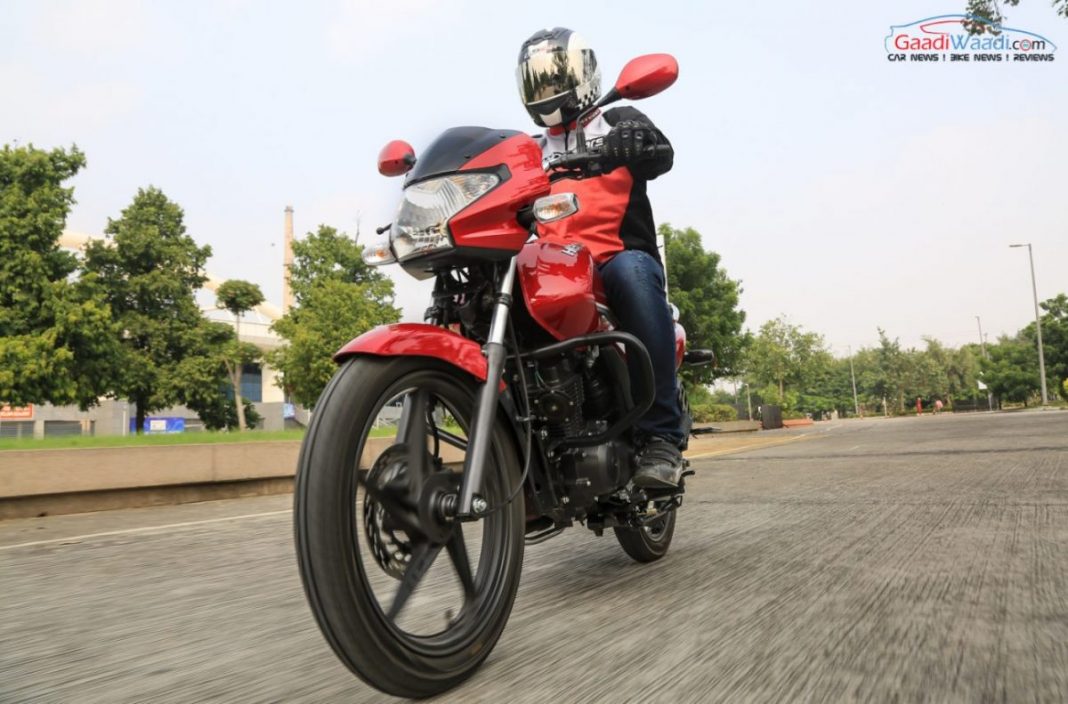 The Indian domestic two-wheeler market has huge potential being leveraged by Hero in the affordable mass segments. Unlike the lower-level commuter spaces, the slightly higher categories have customers preferring different set of vehicles. For instance, considering the 150cc to 160cc segments, you could find people looking for bikes capable of daily commuting in relaxed manner. The other band of young buyers expects sportiness just like the Pulsar range of models.

Hero has newly launched 2016 Achiever which fully focusses on the executive set of customers with a handy performance package and riding characteristics. Recently, the 150cc motorcycles have encountered significant sales improvement prompting manufacturers to update or revamp existing products but the sporty bikes have come out on top considerably. For matured customers, the Honda Unicorn is a huge favourite while the old Achiever was launched as a sure alternative in its first stint. 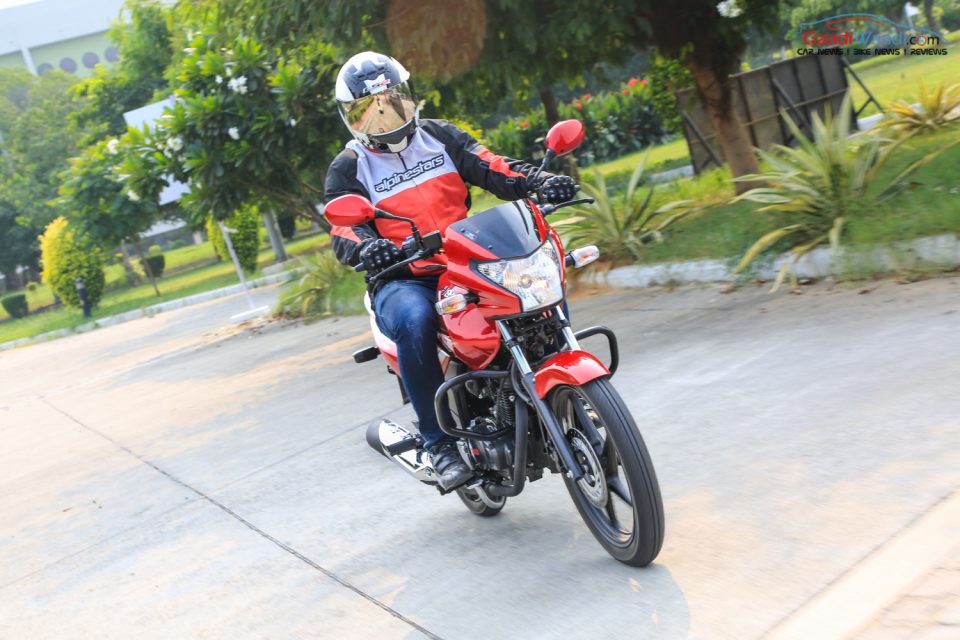 With the sales of the old Achiever dipping down, the home-grown manufacturer has introduced a new version to increase selling numbers. It features mechanical updates, fresh looks and improved ride quality to give main competitors sleepless nights. We had a chance to test ride it and here’s what we think: 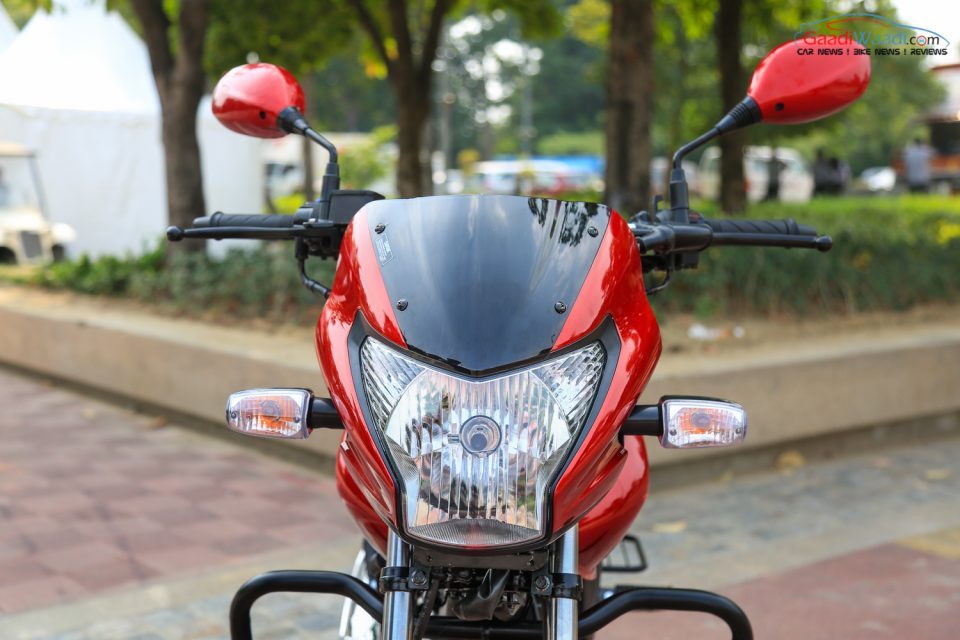 The new Hero Achiever 150 is in no way a menacing looking motorcycle but its soft and smooth flowing design does bring a decent presence. It could otherwise be conceived as a very normal styling even for the targeted executive customers despite being drastically different from its predecessor in appearance. The motorcycle comes fitted with a trapezoidal shaped headlamp and there is an eye-catching fuel tank with chrome Hero branding. 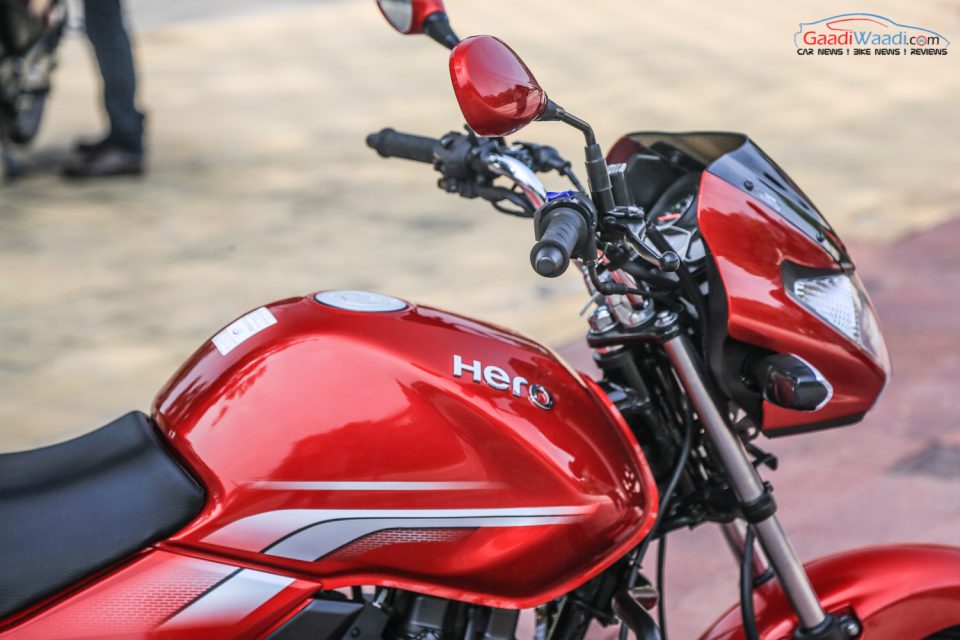 In spite of looking simpler in design, the tail lamp unit goes hand-in-hand with the overall design of the 150 cc commuter. It also features a rather old chunky exhaust muffler with chrome heat shield. In addition to the larger fuel tank, new seat profile and texture, the new Achiever features new headlights and winkers with large visor, bulged out fender and cowl with new graphics. 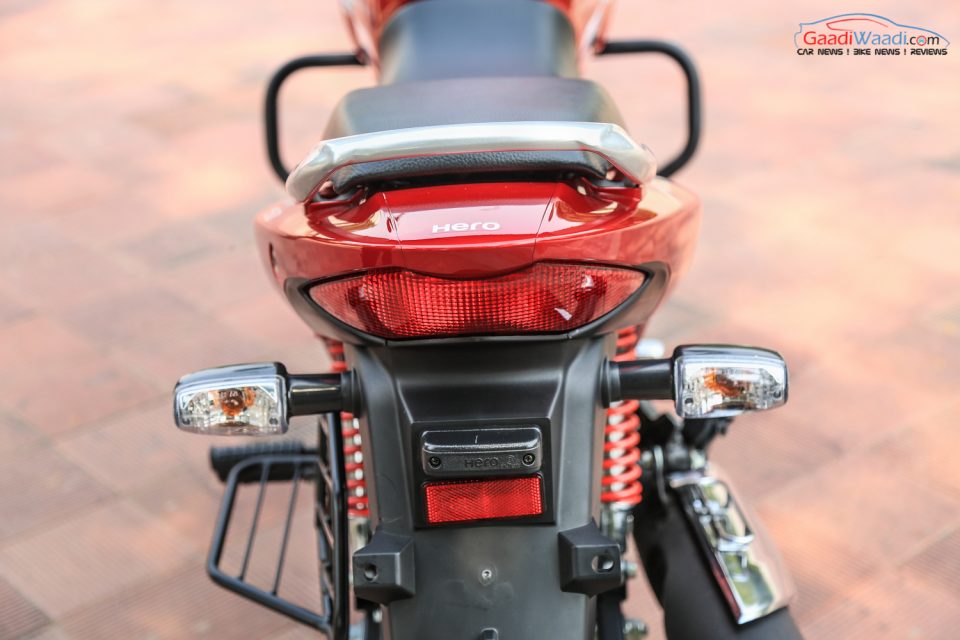 The tall handlebar and centre-set footpegs make for an upright and comfy riding position which should appeal for the targeted customers. The fuel tank, with flush type lid, is easy to hold with the thighs while the seat is very well cushioned. The skinny rear tyre does make the new Achiever 150 less proportionate when viewed from the back. 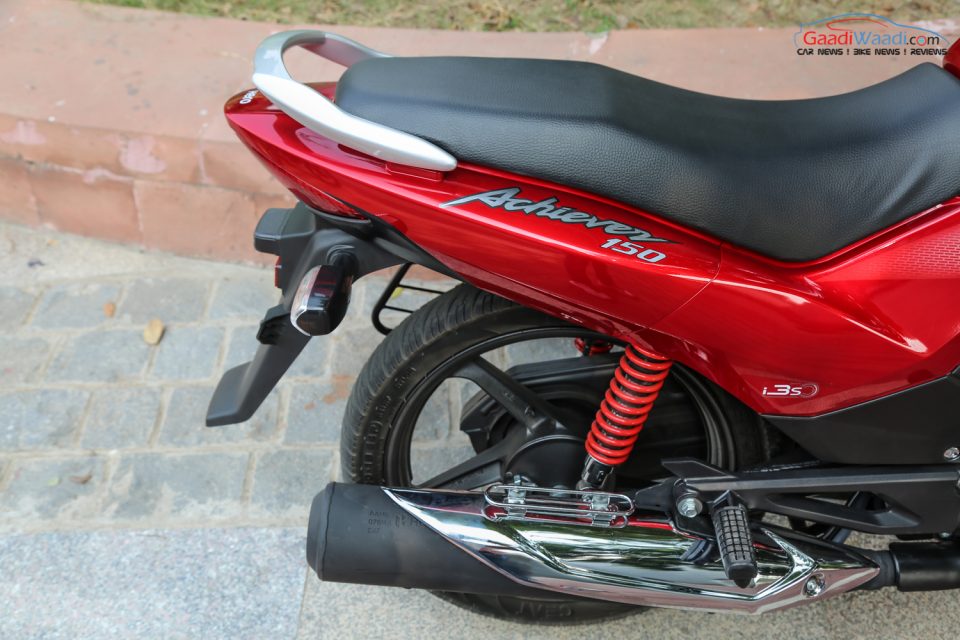 The engine has been applied with black colour giving a contrast look while the redesigned graphics has the “i3S” logo on the centre panel. The switch gear, comprising handlebar-mounted choke, is from the familiar parts bin of Hero make them reliable for longer durations and the overall paint quality is good as well. But the wire hanging below the headlight does bring a sub-standard appeal. 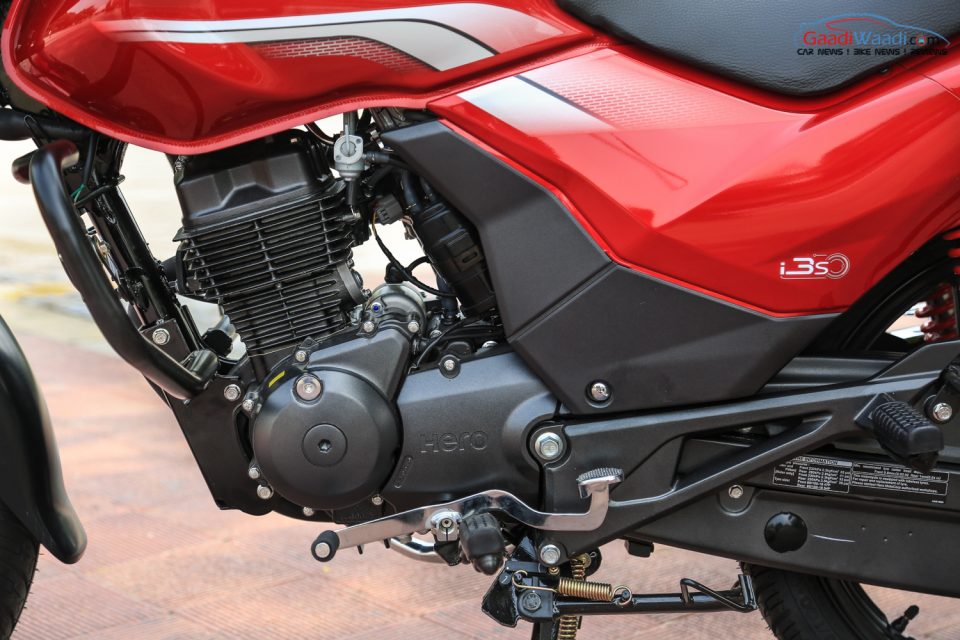 The biggest highlight of the new Achiever 150 is the introduction of the Hero patented i3S (Idle Start/Stop System) technology. With the fuel saving tech, Hero becomes the first manufacturer in the 150cc segment to sell a bike equipped with start-stop technology. Following a dead stop, the rider has to engage neutral and in five seconds the engine gets turned off automatically. Again press the clutch to knock first gear and the engine comes back alive. 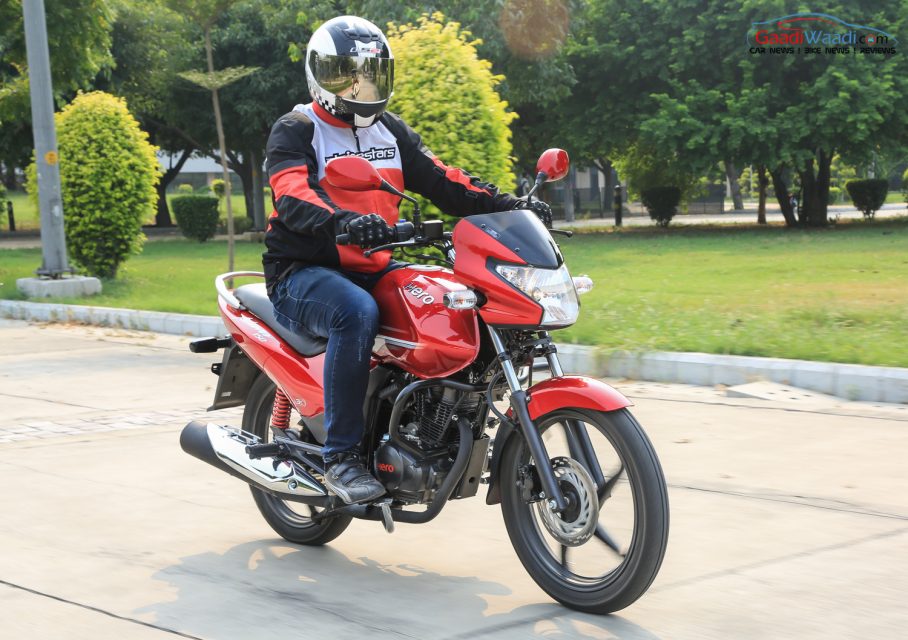 The start-stop technology, which can also be disengaged, can be of great importance if you often get tangled in numerous traffic signals on your daily commute. The new Hero Achiever 150 also features AHO (Automatic Headlamp On) which is a first-in-class technology to comply with the forthcoming regulations the government will implement for increased visibility and in turn safety. 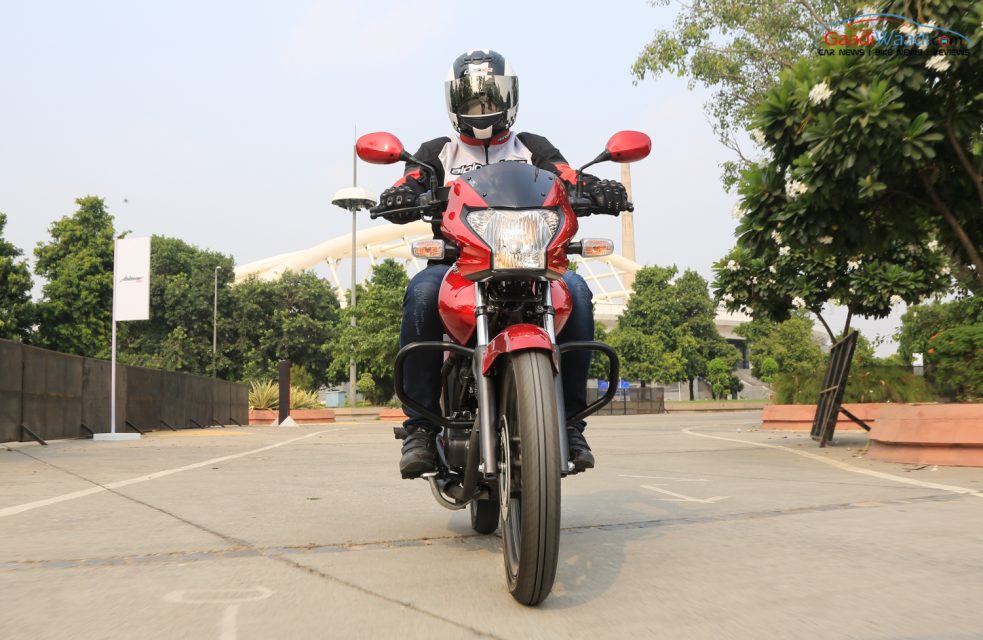 The new Hero Achiever 150 makes the same power and torque outputs as the outgoing model’s engine which was originally derived from the Unicorn under Honda’s partnership. The single-cylinder four-stroke TOD (Torque On Demand) engine produces 13.4 PS and 12.8 Nm of peak torque. The almost square engine doesn’t even have change in bore and stroke size. 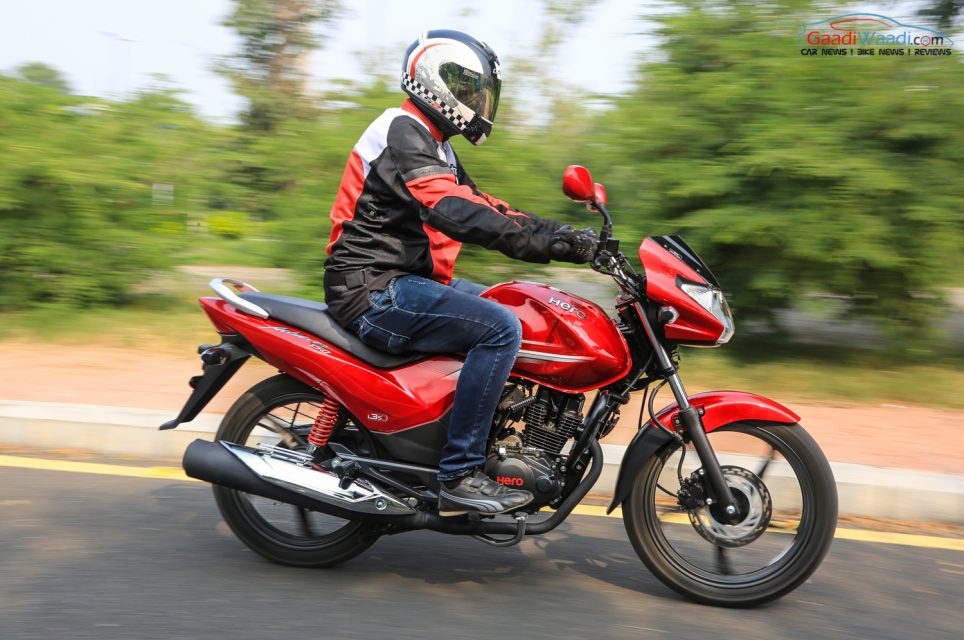 However, Hero engineers focussed on making the engine smoother with improved low-end torque. The new Achiever’s BSIV compliant motor claims to accelerate from 0 to 60 kmph in five seconds which we think could be achieved as we found from out test ride. Until speeds between 70 and 80 kmph, the engine was vibration free.

With improved NVH levels and low-end torque, the bike could be ridden at lower speeds on the fifth gear comfortably. The 2016 Hero Achiever has rated mileage of 68 kmpl. Although we couldn’t verify it on real road conditions we would reckon it will go past 50 kmpl. 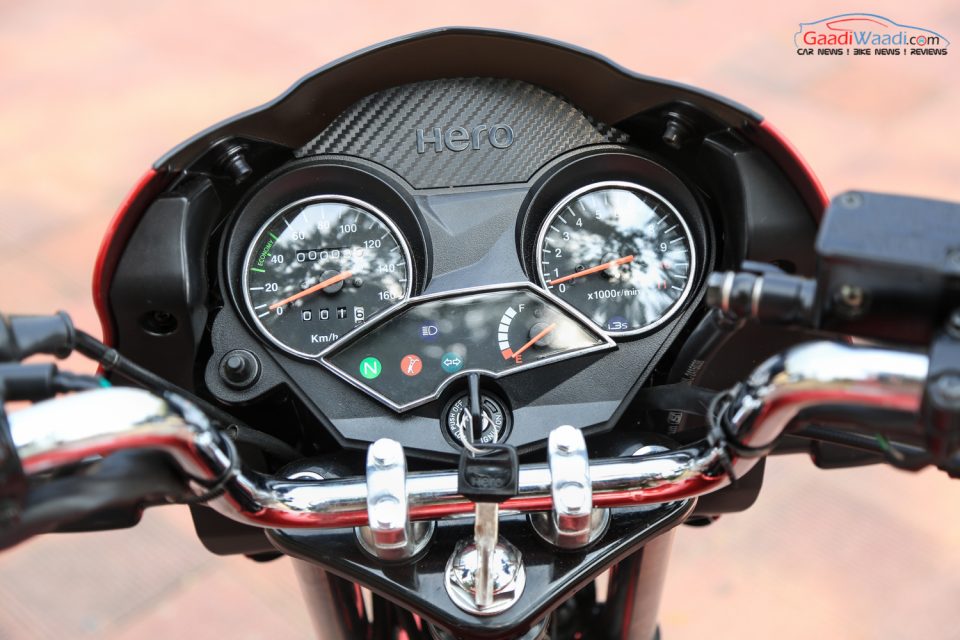 The instrument cluster is a twin-pod analogue unit with separate speedo and tacho. Despite being an analogue console, it does bode well with the design of the motorcycle and is very easy to read without distraction. The new Achiever 150 also comes equipped with a side stand indicator for rider’s safety. The console is pretty ordinary but considering the price tag of the motorcycle we reckon it is a better setup. 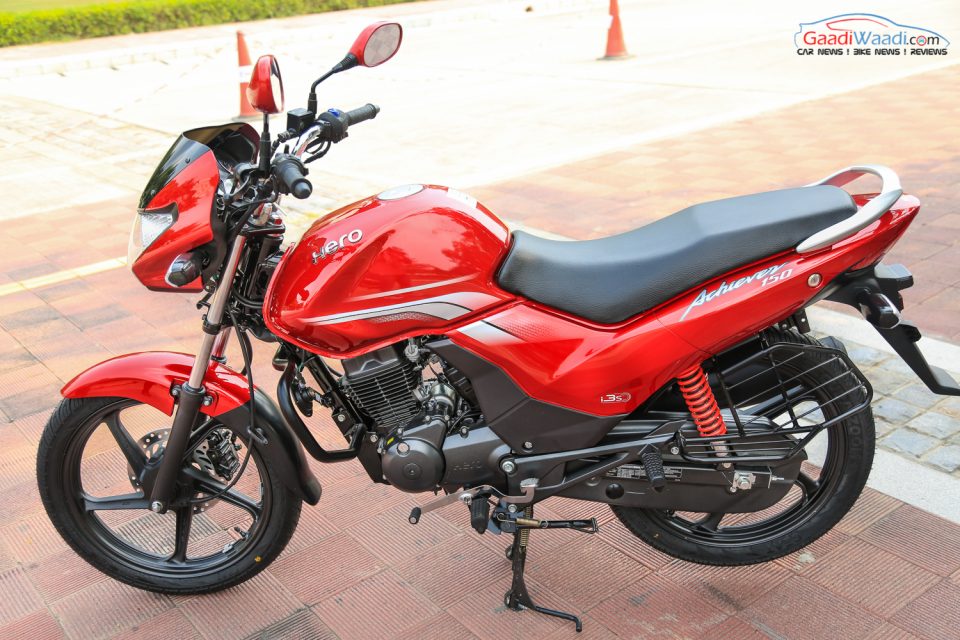 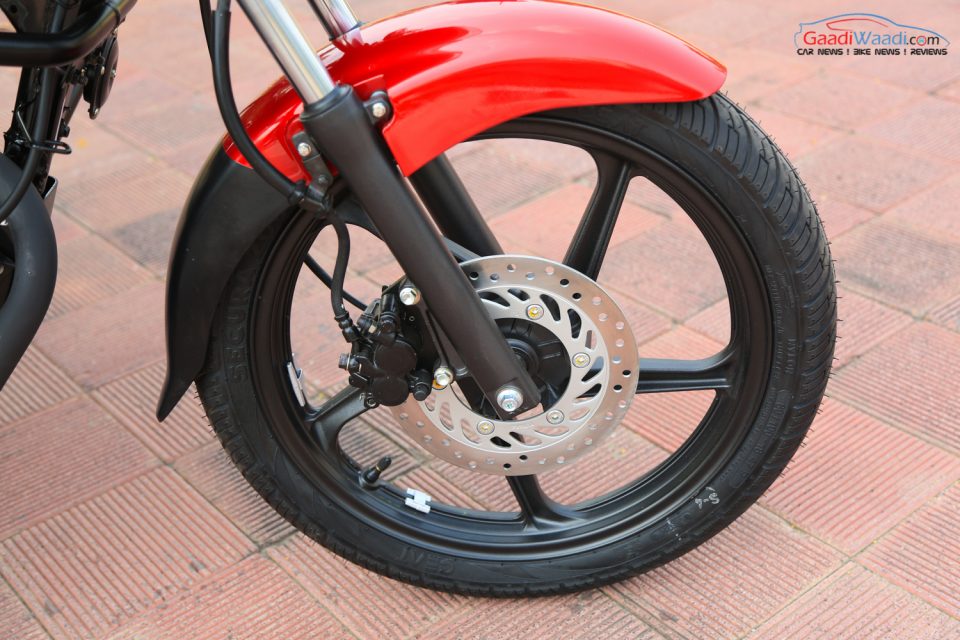 The 2016 Achiever iSmart has telescopic hydraulic shock absorber at front and swing arm with adjustable shock absorber at the rear. Suspension setting is understandably firm to absorb potholes and undulations. This doesn’t ruin the ride quality as it is a much improved factor compared to its predecessor. Due to the lightweight nature of the Achiever, as it’s built on tubular diamond type chassis, you might think it can be cornered with ease but the skinny rear tyre does make it difficult.

However, the direction changes are effortless and the small rear tyre width means less rolling resistance offering better mileage. As for the brakes, the disc brake variant was very effective with better feedback compared to the regular drum system. 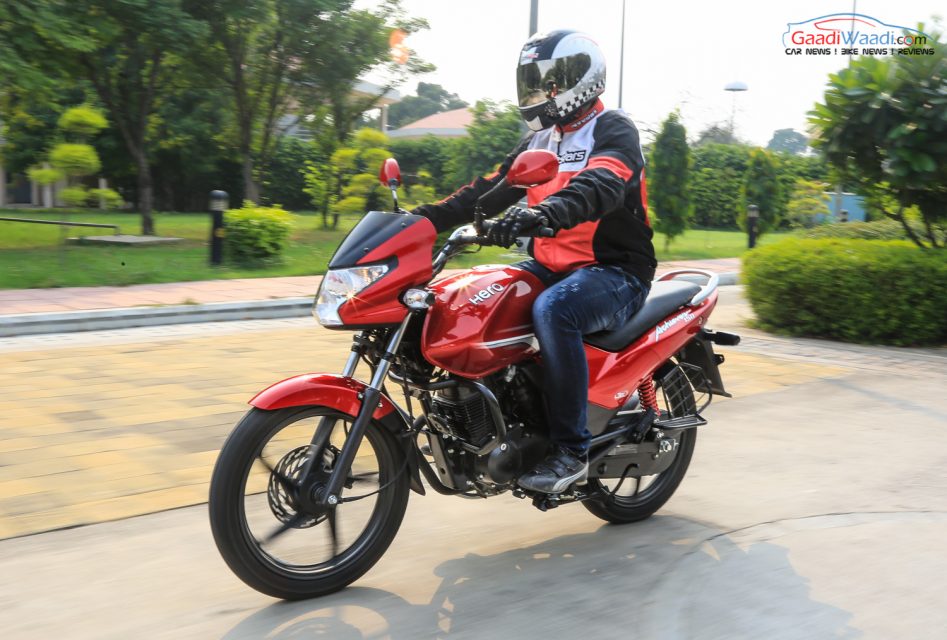 The Hero Achiever 150 is a luring option for buyers seeking reliability, refinement and comfort in the 150 cc motorcycle category. The petrol motor provides decent highway mileage and is fun to ride as well with the start-stop technology coming on its own in traffic for improved mileage as a major advantage over rivals in its space. While the dullness of styling is made up by the fuel-efficient powertrain, the single-piece seat has comfortable space for the pillion which most customers prefer.

The New Achiever 150 starts from ex-showroom price of Rs 61,800 for the drum variant while the disc brake comes with only a premium of Rs 1,000. The disc version would be the apparent choice because it allows for responsive braking even with the skinny rear tyre. Considering the price of main rival Honda Unicorn at Rs 69,305, the new Achiever 150 iSmart should attract more buyers and we could see a shift in momentum in the coming months in sales charts. 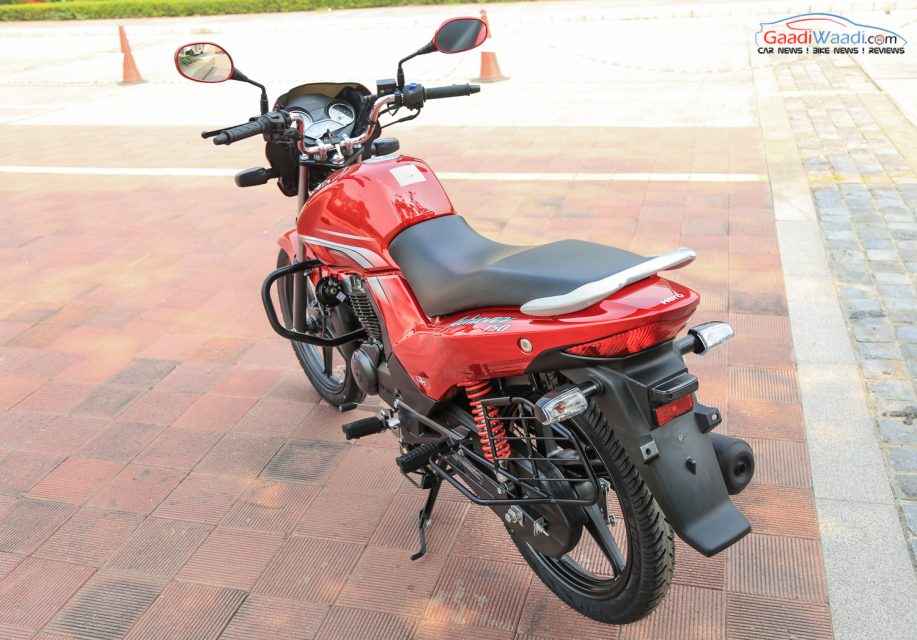