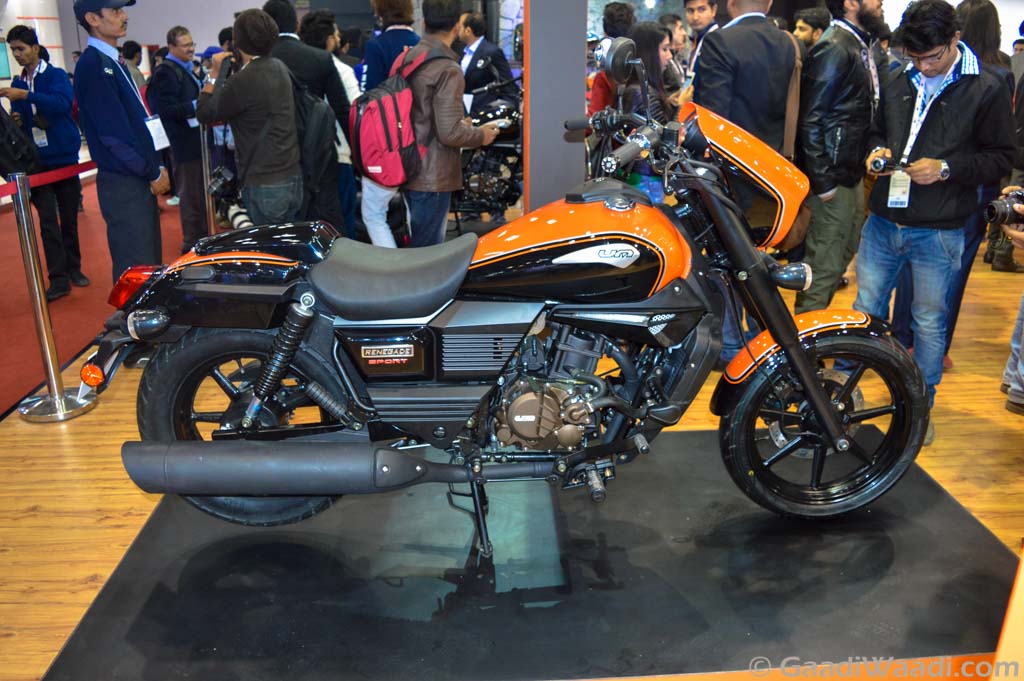 UM motorcycle is no unknown manufacturer in the market anymore. The company has gone haywire with its marketing stratgey on social media ever since it came at the Auto Expo 2014. The brand has finally launched the highly awaited Um Renegade Sport S which seems to be real deal in the stable of the brand.

Cosmetically, the UM Renegade Sport S does turn out to be a looker as it is very Harley-Davidson Street 750 to an extent. the UM Renegade Sport S does have good road presence as it is boasting of dual-tone colour schemes, front-set foot pegs, split seats, 7-spoke alloy wheels, large and long exhaust finished in matt black. On the tank though it has an offset fuel filler cap. The cruiser has unique trademark UM features list including the blind spot rear view mirrors and anti-flat tyres which are available on the automaker’s internationally. The UM Renegade Sport S powered by a 279 cc single-cylinder water-cooled engine developing 25 bhp at 8500 RPM and 21.8 Nm of torque at 7000 RPM, mated to a six-speed synchronized mesh transmission. The UM Renegade Commando comes with wide handlebars and hydraulic telescopic front suspension and dual spring rear suspension. The Commando has a fuel tank of 18 litres and weighs 172 kg with 90% fuel filled in fuel tank. All three engines have the air filter with paper element used in them for filtration in our road conditions. It will be interesting to see how the company gets the motorcycles to the market when it comes to sales and service outlets. UM has been literally shouting out loud ever since it showcased its motorcycle at the auto exp. This has helped gain fans and prospective customers on social media networks. Lohia Motors is helping them build motorcycles and much more will happen once the official launch is done, which happened today. More concrete news is set to follow hence forth as the teasing and leaking will be finally over.