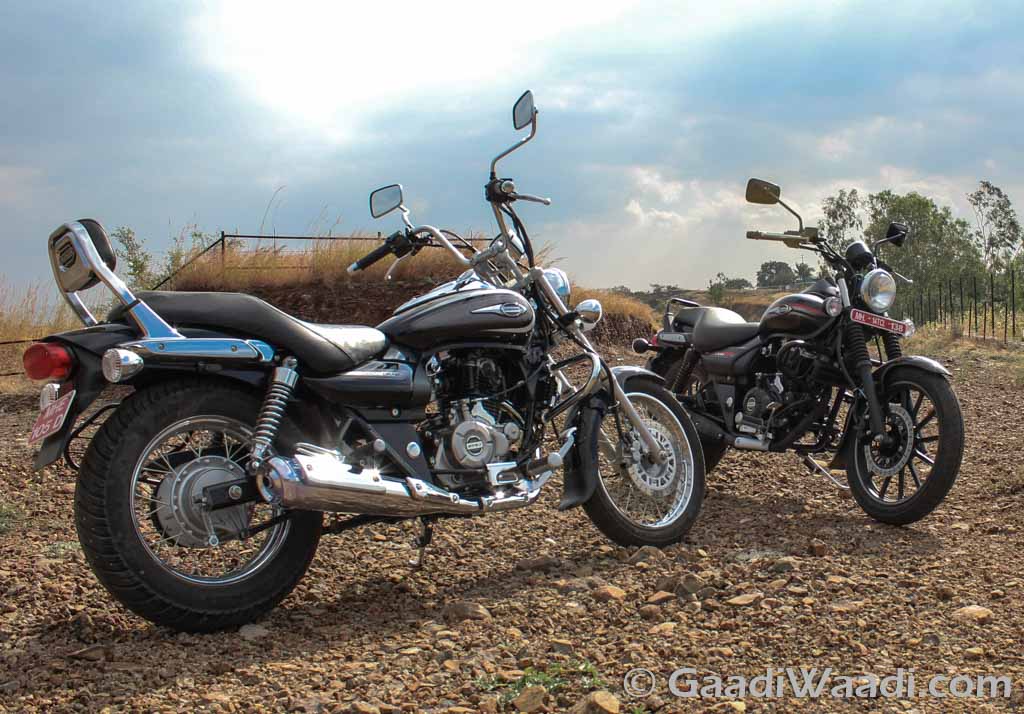 The Bajaj Avenger is now the talk of the town. We recently tested all three variants and have given our verdict on the Avenger 150 Street. The new Avengers are based on the same platform as before but have been heavily revised in every single way. Today we talk about the Street and Cruise 220 that we sampled as well. Bajaj says they want to now want to sell 15,000 units a month instead of 4,000 units a month which Bajaj was doing over the past with just one variant of the Avenger.

Bajaj has made two 220cc variants. A chrome laden, for cruiser lovers called the Cruise 220. For the urban crawler and one with the sporty blood, the Street 220 is here with more sporty appeal to it. How do they fair and what are the differences we find out!

When it come to styling, the Cruise 220 is hard to look at the day. Either you need glares or park in shade because the sun constantly gleaming on endless amount of chrome can cause damage to your eyes. It is strictly advised to park in shade or stay in showroom walls when you go ahead to buy one. Chrome is every where, right from handlebar weight ends to exhaust, to the horn cover for goodness sakes!

Overall styling remains the same, but there tit bits are changed such as the grab handle aka back rest seat mount. Chrome spoke wheels, engine guard, footpegs, subframe bolt cover, everything else in chrome. The new badge of the Avenger series though clearly reminds of the Kawasaki age emblem that both brands made. Pin stripes on the tank, while riding, makes it look like a authentic cruiser indeed.

Everything on the street on the other hand though is matte black and has pin stripes in red. It has alloys instead of spoke wheels. Gators on the fork to prevent that bit of chrome too, a black exhaust with brushed aluminum forged cover and is just devoid of the backrest that the Cruise gets as standard for sportier, lonelier appeal.

Common derivatives include same headlamp, tail lamp and cycle parts which are painted black instead of chrome finished. We wished the levers and side stand on the Street variants were black instead of the chrome seen on all three Avengers. Overall, like we said before.

Attention to detail is clearly seen on these Avengers and hence this evolution in design is devoid of criticism, there still is but not as much. However, Bajaj could have done better with Street on tiny tit bits make it look more focused in small areas as critical areas are covered. Fit-finish on the other hand and quality all around is better than before, and it was good in the past as well.

Cluster wise both bikes are the same. Single trip meter along with odometer on the LCD meter along with the speedometer that does the swipe when you click on the key, which is located below your thighs when you sit. Handle lock is seen on the handlebar in front of the rider. Third lock is for the petrol tank.

Rest of the warning lights such as battery, turn-indicator, neutral, high beam are located on the tank panel that is matte black but the switch area is piano black for Street 220 and chrome for Cruise 220. The warning lights are difficult to read as you complete distract yourself completely from the road to look at it.

It’s a comfortable bike indeed. Footpegs are front set and seat is wider and much more cushioned than before for the rider. Pillion seat remains pretty much similar as before. Handlebar is main difference and infact the only difference these bikes have mechanically. The Cruise 220 has a higher set handlebar which falls to hand immediately. Mirrors are good but the adjustability is very limited and at higher speeds the vibrations don’t allow you see what’s behind, that is mostly after 120 km/hr hour.

The Street is not a stretch despite the fact is flatter and wider handlebar. Cruise is a good notch easier to navigate in town, but the Street isn’t far behind either as it more communicative and quicker to inputs. In short, the Cruise is for the lazier and elderly person and Street is for the youth.

Powering both the Street 220 and Cruise 220 are identical engines. 220cc 2-valve motor makes 19 PS @ 8400 RPM and 17.5 Nm of torque @ 7000 RPM. The numbers are lower than the Pulsar 220 and stay identical to the previous Avenger 220cc engine. The engine is now very smooth lower down in the rev range and the power delivery is linear but has a hint sportiness throughout the rev range to keep that Bajaj characteristic intact to an extent, which is basically being brash at the top of the rev range.

Throttle response has seen a great change in the way the engine responds to inputs, as it is much quicker than before. Low end torque is really good and pulls well enough in the mid range, but not like new age Pulsar engines, which have pin point precise mid range acceleration.

However, it is the top-end when it cams get alive and post 100 km/hr it just keeps on pulling till 130 km/hr given the road conditions.

We even saw 140 km/hr while being slightly ducked. NVH levels are very good than before, but at the top while redlining you do get vibes, but only at the pegs and not at the handlebars due to heavy bar-end weights installed. All of this is thanks to the taller four gears and short first gear, one could achieve this type of power band.

Fuel economy should rise a bit and should be around the same 35 km/l mark. Clutch is now very progressive and consistent in operation and gearbox is really good over the past, when compared. Overall, a much more easier engine to live with when in comparison of day one when the 220cc carb engine was born.

The same tyres, suspension and chassis setup continues with the Avenger Cruise and Street 220. Only difference between the two mechanically is the handlebar. Cruise handlebar makes it easier to maneuver because it is raised. The Street 220, thanks to its flatter and wider handlebar allows for sporting riding and helps in riding enthusiastically much quicker. Handling is good, grip is enough, cornering clearance is also good, but you can get naughty and obvious and scrape the footpegs if you want.

Turn in relatively quick and the rake is fairly and oddly satisfying for the Avenger series. Where it scores best is the suspension setup along with the linear engine makes sure suspension does it job well and doesn’t through tantrums. It feels a lot tauter, tighter and responsive when it comes to chassis feedback.

Ride quality is quite stiff and isn’t hard and Bajaj says there will be no bottoming out and we saw the same on medium speed and low speed breakers. Brakes are the best part, as they Bybre and not endurance. Good initial bite and there is progressive braking as well after that with good feedback from lever and stopping power is in abundance.

However, rear brakes don’t feel great on the 220 as they did on the Street 150 for reasons. It’s the engine which was the made suspension work much better than before and icing on the cake is rebound and damping has been adjusted too. High speed stability as always is very good and front stays planted.

One criticism we have is the rear is softer and does need stiffing or better tyres to cut that part to an extent. Overall, by cruiser standards, the Avenger does it job very well indeed.

The Avenger doesn’t have much competition to fight. Sure there are touring motorcycles from the same stable. If cruiser’s isn’t your thing you can get AS 150 and 200. If you don’t want either of these you can look at the Hero Karizma which have similar engines and outputs. But the recent one’s have lost the charm of the old one in every single way. This is theoretically a shootout between the Cruise and Street 220 itself.

Jokes apart, it is just the styling which sets them apart and the handlebar. Street 220 directly appeals to the enthusiast first and last he would choose. Cruise is for people who wear sunglasses all the time, to avoid the glare from the chrome everywhere and they need it too because the Cruise 220 attracts a lot of attention, including the all mighty sun. Bajaj clearly than has distinguished these products very smartly then and its up to you to decide. Fear the black or shine like a star.