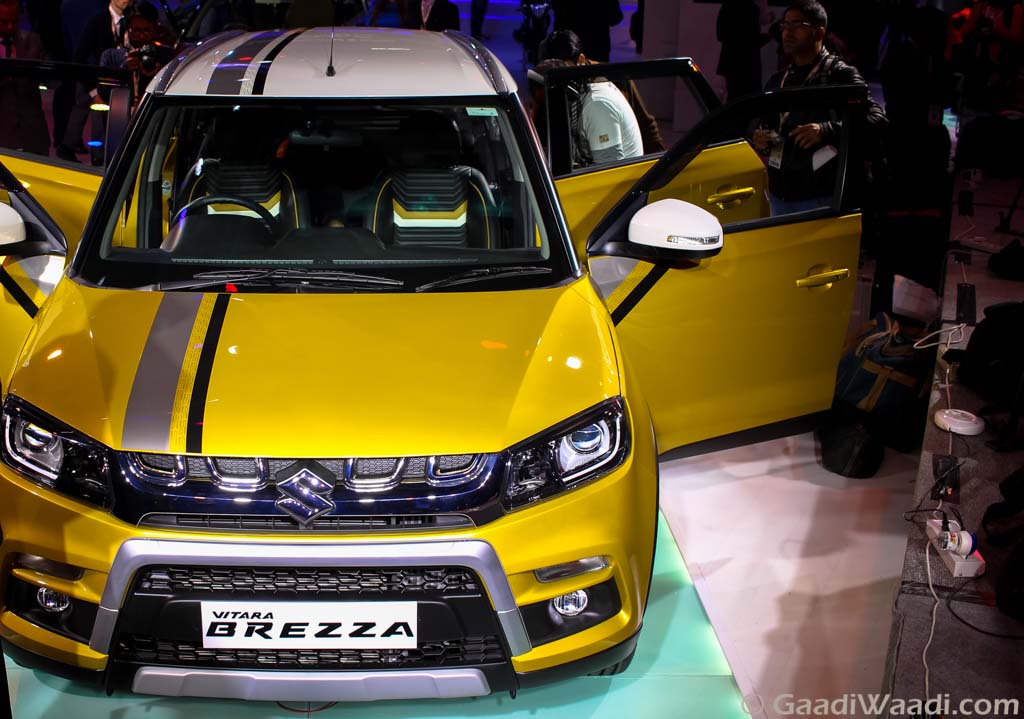 Maruti Suzuki Vitara Brezza is a home-grown compact SUV conceptualised and engineered at the the company’s Indian facility and developed by an Indian team headed by Chief Engineer Mr. CV Raman.

Launched at the Auto Expo 2016 carrying a lot of promises, it comes only with a four-cylinder 1,248cc diesel engine producing 89 bhp maximum power at 4,000 rpm and 200 Nm of peak torque at 1,750 rpm. The diesel unit is coupled with a five-speed manual gearbox. The Vitar Brezza returns a fuel efficiency of around 25.9 kmpl and Maruti Suzuki is aiming to sell 5,000 units of the Vitara Brezza monthly. The product delivery will commence from the Indo-Japanese car maker’s standard dealerships rather than premium Nexa outlets. It will compete against the likes of recently launched and well-received Hyundai Creta, Renault Duster, Mahindra TUV300, Ford EcoSport and the likes in the sub-compact and compact SUV segments. It will be offered with driver airbag as standard across all variants with ABS, EBD and front passenger airbag provided as optional from the base model. It will also be shipped to several emerging markets across the globe. The Vitara Brezza measures about the sub-4m segment standard 3995 mm in length, 1790 mm in width, 1640 in height and comes with a generous wheelbase of 2500 mm and boot capacity of 328 litres. It has an unladen ground clearance of 198 mm. It’s the first vehicle in the country to meet offset and side impact crash tests about to come into existence from next year, aided by the stronger Suzuki TECT hi-tensile steel body structure. As we revealed earlier, the dual-tone metallic body colours are an attractive addition from the visual stand point. As for the interiors, the Vitara Brezza will have Cockpit-style cluster with mood lights, centre console finished in piano-black, dual-tone interiors decorated with silver accents, multi-function steering wheel with buttons for audio and other controls, neatly laid-out panels and switches with an all-new gear lever. Component sharing with Swift and Baleno premium hatchback will result in touchscreen SmartPlay infotainment system, cruise control, navigation system with Mapcare, push button start, chilled upper glovebox, reverse parking camera and voice command function are being carried over to keep the costs down of the sub-compact SUV. It is expected price between Rs. 6.89 lakh and Rs. 9.98 Lakh for SHVS diesel hybrid engine and could become the best-selling SUV in the Indian market if Maruti Suzuki meets its sales aspirations.

it will initially be available in diesel trim and offered in six variants namely LDi, LDi (O), VDi, VDi (O), ZDi and ZDi+. Market launch will take place as soon as next month whilst a petrol engine will be added to the line-up later this year. An automatic transmission has been slated to appear in the closing quarters of 2016 or in early 2017.