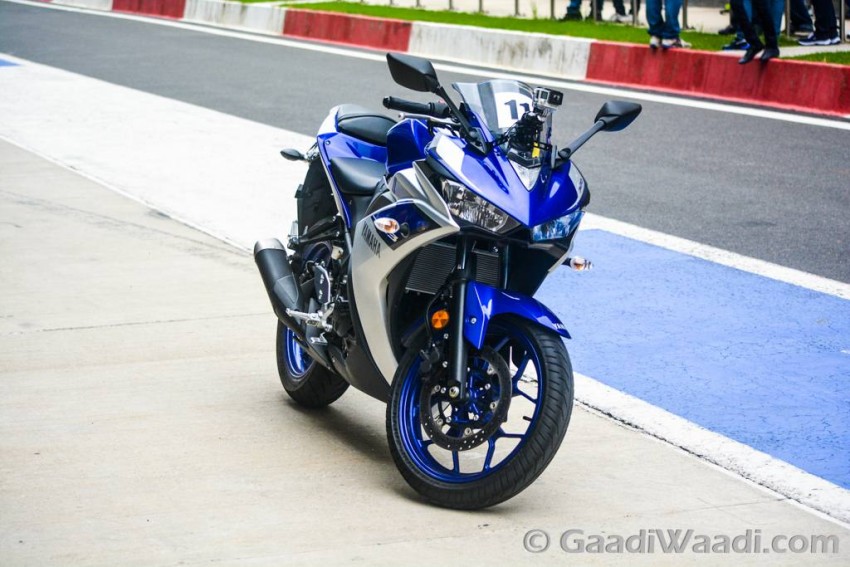 The much awaited motorcycle is here in the most competitive middle weight segment is here. Yamaha YZF-R3 makes its entry to India and has been launched at the famous Buddh International Circuit. Yamaha YZF-R3 comes at the right time after a really long time in the proper performance motorcycle categories. As usual Bajaj, with KTM this time around is the segment leader with a product lineup which seems unbeatable as of now.

Yamaha YZF-R3 comes here with the R3 and not the speculated R25 and still prices the product quietly decently enough. How was that done? Well the second name for this motorcycle can be called Budget R3. Yamaha has saved on every single corner they ever could. What are those things? We will find out in the following encounter that we had on test track with the Yamaha YZF-R3. Styling wise the Yamaha YZF-R3 is quite a looker from the side and the rear. The front is where you can setup a debate panel and argue about it all day whether it’s a hit or a miss. The Yamaha YZF-R3 dual headlight looks striking but isn’t beautiful as art or its competition.

The Yamaha YZF-R3 does look quite striking in the Racing Blue along with blue colored wheel combination. Ergonomics package include mildly rear set footpegs with a just enough comfortable seat. Meters are the same case with a normal motorcycle nothing special here as tachometer is analogue with speedo is digital with other tit bits as usual. Performance wise, the 321cc motor does not disappoint. However, hardware has been skipped on smaller parts such as the spark plug which is a basic CR86 unit instead of the Iridium or Bosch units that its rivals use. Testing a machine as small as this on circuit as huge as this does not give you the thrills. Hence, we could push the machine harder. The engine is a smooth and refined unit all the way till redline.

Mid range is potent enough and top-end is good. What we liked is there is a good amount of low-end torque which the bike produces. Quite similar to the KTM RC and Duke 390. 42 PS and 29 Nm do the job as they are available quite lower in the rev range than its key rival the Ninja 300. 100 km/hr from standstill is expected 6.5/7 seconds. Soundtrack is quite snarly, aggressive while screaming all the way is Yamaha YZF-R3 forte. 6-Speed gearbox is smooth and shifting up and down is easy task. On-road behavior of the transmission should be similar but not identical. We saw a top speed of 164 km/hr on the speedometer which was quite easily attained without tucking down fully. Other riders could see upto 180 km/hrs and we know from international rides, the speedo can show 190 km/hr as well. Chassis wise budget cuts continue. Tubular is all fine in terms of performance and its key rival the Ninja 300 has it as well. While everyone was expecting a Perimeter frame wasn’t possible because of budget costs. Front also has similar telescopic forks and rear has monoshock.

Suspension feels taut enough for the job and taking BIC sweepers at triple digit speeds for an average built and skilled rider was an easy task. Chassis feels nimble and agile enough and is also confidence inspiring along with being forgiving like any other Yamaha motorcycle, the company has ever made. Despite the fact that we did not put the machine till the absolute limit, we could see the tyres giving up quite soon. These tyres will be perfect for Indian roads for as we have seen them on many bikes despite wet or dry conditions. However at the track, where limits are easily reached they gave up at the limit, as expected.

Yet again, a budget cut seen. Braking wise, the brakes are feel-some enough and powerful enough but not intuitive enough. ABS is yet another budget cut and is missing. Overall how is the Yamaha YZF-R3? A neutral feeling motrcycle and forgiving bike with a lot of power for the street. Yes, it is a refined motorcycle and should be a decent tourer as well as it has good fuel capacity. However the facts, which is slightly disappointing is that ever corner is cut to keep the pricing competitive.

Right from spark plugs to tyres and suspension. Did we mention slipper clutch is missing? Something which will be seen on 2016 KTM RC 390 and Ninja 300 already has.

Reason for all this? Pricing! Looks like Yamaha tried a wee bit of localization as well to get this pricing but it’s still Rs. 1,11,494 expensive than the KTM RC 390 and almost Rs. 39,000 cheaper than the Ninja. All prices are ex-showroom Delhi.

Ninja 300 also has slipper clutch, better styling, sounds better, has more reach when it comes to sales and service. It’s worth if you like the design and are a brand lover at first sight. A definitive verdict will come when we put these bikes to the test on the road, where you and i spend 90% of the time.