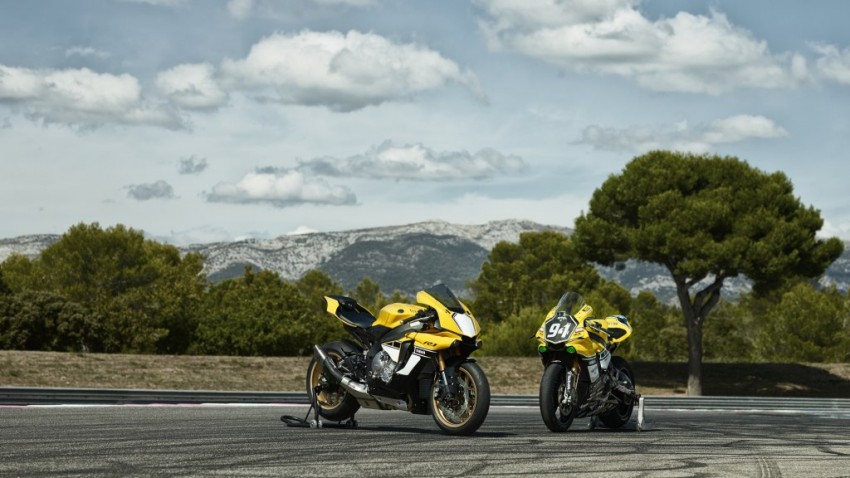 Yamaha is in the news for all the right reasons. The company has launched a lot of products since last year around the globe and in India, we too got a scooter and the R3 and R15-S. However, today Yamaha sent every motorcycle enthusiast into a crisis. The moment I saw the Speedblock livery on the new R1, I just forgot the criticism the design had as the livery on the R1 is truly epic and holds a very special place in the company’s history. There have been a few times when this livery has been painted on a bike from Yamaha. Pictures of Speedblock livery have been posters and wallpapers on our walls and computer screens for a long time with various other motorcycles over the past.

2015 Yamaha R1 SpeedBlock looks drop dead gorgeous in these pictures as the black blocks, white background and the majority of the color yellow has been used. R1M has also been a part of this act and it does look even more purposeful. Livery is just not the entire thing as Yamaha has added an evil looking Akrapovic exhaust can to the bike to give it visual appeal in the right color, grey.

2015 Yamaha R1 SpeedBlock has all the rider aids you will ever need. However, what you need the most is the 999cc cross plane crankshaft engine, which makes monumental 200 BHP now and 112.4 Nm of torque. The Cross-Plane crankshaft is known for making throaty exhaust note along with an unparalleled intake note, which should be truly intoxicating.

2015 Yamaha R1 SpeedBlock should come to India in limited numbers, but post 2015 as the livery is being made available in USA and Europe in December 2015. Thank you Yamaha for yet another wallpaper, which gives goose bumps every time you stare at it.