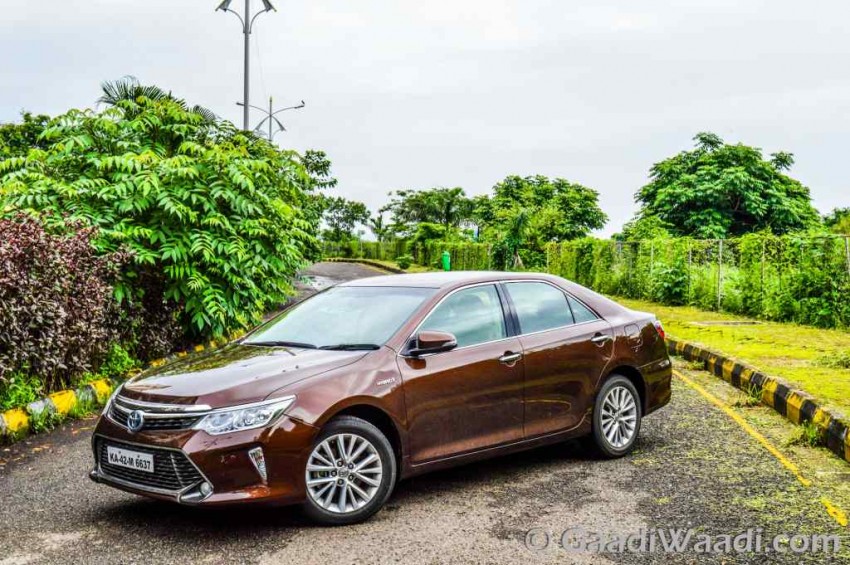 Recently the automotive world is throwing a lot of surprises towards critics and journalists. With new initiatives and new technologies, new type of cars and giving a safety priority. Toyota is one of those manufacturers who has been keen on delivering on all these points. With safety being top initiative for Toyota and technologies like hybrid system gaining its place in the market along with the Camry and other sedans coming in, Toyota has done all of the above meanwhile the rest of the manufacturers are still in progress. Toyota has a huge R&D capability and facilities and hence it has managed to accomplish it.

It is also the pioneer in hybrid technology around the world with the Prius and in India, It is the Camry Hybrid, which turned to be a huge cash cow for Toyota. Everyone was taken back from this new when the facelift was launched. We all though it’s the normal petrol, which is doing just ok, but since it’s a hybrid it costs more and sells means, there is a place for two things. Long Japanese sedans and hybrid tech. Instead of stiff competition from the Germans it continues to go strong. We have driven the Camry Hybrid thoroughly, How does it fare let’s find out! First look at the car says that is a very long car. At 4.9 meters in length (almost) it is a pretty huge car in length. The width is just about imposing, but not as the Germans. The front design is a mixed bag. Mesh ‘diamond’ grill in two parts along with oddly placed fog lights. Separately mounted turn indicators with a sleek headlamp with two projectors and three slats of chrome, makes it an extremely busy design you don’t know what to absorb at first glance. Rear however, is clean and crisp with huge tail-lights that are LED’s. The Toyota badge on the boot and on the front grill has this blue ring around the badge symbolizing hybrid tech under the hood. Hybrid badges on the side fender and the boot symbolize that as well. 15 spoke 17-inch wheels perfectly fill the arches and give a good stance to the car. The Petrol car gets 16-inch. The Brown shade of the car is a good idea, but when we saw other new hybrid Camry’s all around, they were all gray seems like a popular choice. Overall, an imposing car, very striking, not exactly beautiful but design grows on you quickly. Step inside and you immediately notice the thick carpets that Toyota has used to give the car an upmarket feeling. Half the size of Rolls Royce carpets means it is trying to woo customers seriously. Top of the dashboard has leather on it, which makes it soft-touch.
Below that there is wood garnishing as a single slab above glovebox. Dark beige has been used for cabin and light color seats and the rest of the cabin has made it clearly airy along with the superb glass house. Quality, fit-finish is top-notch, but the plastics for the switches and switchgear feels less premium.

Thick carpets, plush beige interiors along with class leading space and a proper 5-seater layout means occupants can relax all the way Space is back and front is segment best (not class leading) and is more than enough. More than enough head, leg, knee and shoulder room is present. 2015 Toyota Camry Hybrid is a proper five seater as the transmission tunnel barely makes it presence. Dedicated A/c vents at back are there to make things cool. Stowage is more than enough as they’re in cubby hole in the armrest along with a cup holder small place to stick toll tickets in the small front cubby hole, which houses 12v socket. Ash trays are located at back, on the door pads. Despite all the features listed below, heated mirrors, sunroof are missing. Let’s start with the Infotainment system, which includes 4.2″ MID Screen Touchscreen DVD with Bluetooth. Automatic LED Headlamps with Auto Leveling and LED Clearance Lamps. HID lamp in high beam projector is missing and is truly cost cutting measure. Powering the 2015 Toyota Camry Hybrid is a 2.5l, four-cylinder engine that produces 160 BHP and 213 Nm of torque. Power is transmitted through a seamlessly slick E-CVT gearbox, which works beautifully and is rare praise for any CVT gearbox. Since its a Hybrid electric motor and a separate 245V Nickel-metal hydride battery under the rear seat make the total power out to 205 BHP. 24 BHP more over the standard petrol 2015 Toyota Camry. VVT-i is only on the intake side for the Hybrid while petrol gets both sides. Thanks to the Hybrid system combined power is high, which, when combined gives it superb low-end power something Japanese petrol engines usually lack. Accelerate of the line from zero or from 10 km/hrs all the way till 100 km/hrs, there is a kick in back as the battery power along with combustion motor propel you ahead. Performance is good and 2015 Toyota Camry Hybrid keeps pulling all the way to a indicated 195 km/hr topspeed.

Engine was new or else we think the top-speed should be around the 230-24 km/hr range. Low-end is good, with a good mid-range and top-end is really punchy. However, while accelerating though, you can notice the torque steer, which, if no firm hands on the steering can result the car to be everywhere. Traction control does kick and help, but there is no denying it’s there. NVH levels are good and there is very little whining

Torque steer, body roll and silently whining gearbox along with a screaming engine make it intensely characterful car to drive at the limit and on the outside the sleeper looks is easily fooling the masses We have nicknamed the engine here and we call it SSS. Silky, smooth and screaming motor from Toyota is a absolute hoot. The almost 7000 RPM redline (guessing since there is no tachometer) is fun to play around. Fuel efficiency is the forte of this car and despite hooning around a bit we could see lowest of 7.6 km/l to the highest of 17 km/l.

We got a tank to tank efficiency of 10.62 km/l, which isn’t bad considering 50% of the time it was performing at its peak. Fuel tank can lend range upto 750 kms. Normal and sane driving can be seen upto 12-13 km/l quite easily, which is highly respectable for a car for this size and luxuries on offer. Standard suspension setup is seen on the 2015 Toyota Camry Hybrid. With MacPherson Strut with Stabilizer Bar at the front and Dual Link with Stabilizer Bar at the rear. It is no Multi-link suspension, but it works just fine as it provides very mature ride quality. Underlying stiff aside it glides over potholes and does upset occupants with vertical movement. There is body roll while cornering hard and taking sweepers, but its well controlled. If it had 17-inch like the normal petrol 2015 Toyota Camry Hybrid the car could have been more fun to ride. Handling is just about fun with good mechanical grip from tyres, very little understeer. Tyres are of good quality and special low decibel tyres which are comfort oriented, but still do a fine job of providing grip in wet and dry conditions. Maneuvering the 2015 Toyota Camry Hybrid is easy task, thanks to a tighter steering ratio along with a light steering, which falls to hand perfectly.

U-turns are easy and changing lanes and cornering with limited inputs is easily possible. High speed stability is impressive, till you cross 150 km/hr which makes it slightly uneasy over patchy expressway that we have. With disc brakes all around, stopping power is excellent, but the pedal feel is mushy at low speeds, a typical automatic gearbox trait. Summing up the 2015 Toyota Camry Hybrid then is simple. With competition from the Honda Accord is gone as it is discontinued there are the Germans which offer diesel but do you really need that? With fuel efficiency is pretty much almost present here and the reliability which the latter cannot offer, 2015 Toyota Camry Hybrid makes a fine case for itself automatically.

Sure, the Superb is a super car but it is all set to be replaced meanwhile the Camry here is the fresh of the lot with its new facelift. It has negatives but something you can easily live without. What Toyota offers is bullet proof mechanicals which take abuse for years and years with just plain service. It is wee bit dated on the inside but it classy, full of quality and is built to last. A proper 5-seater long distance tourer which is easy on the pocket once you buy (at a high price) it makes the right choice for us Indians in this segment indeed.