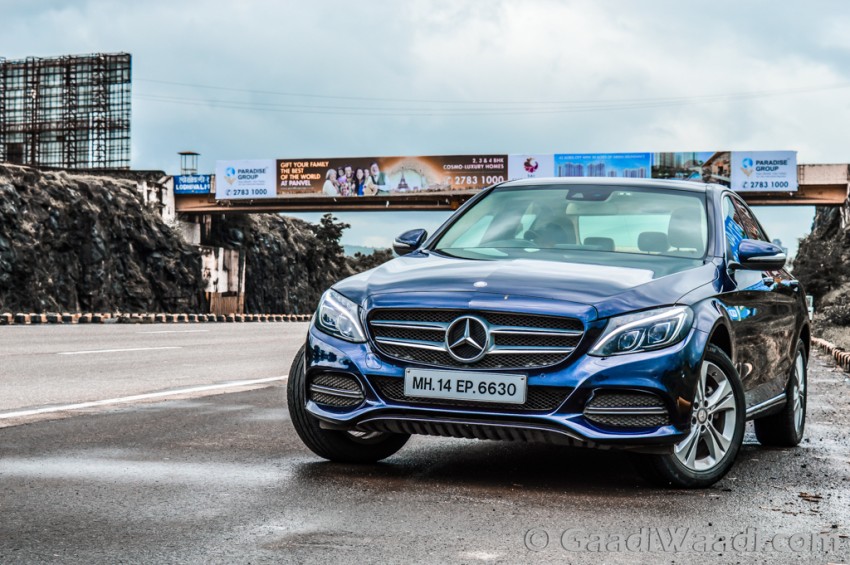 “The Best or Nothing” is a tagline, which Mercedes-Benz lives by. The company has always tried to offer the best to its customer and they want them to settle for nothing else. This is a quest, which takes decades or in this case centuries to accomplish. When the first C-Class came, the W202, which replaced the W201, it was revolution and an entry into the Mercedes-Benz family. Since that three generations have come and gone and provided the company with volumes, profit and loyal set of customers.

So its obvious Mercedes wants to keep the chain going and today we have the new generation C-Class, the W205, with us in the petrol avatar. The last facelifted C-class was an already a huge success as the facelift was comprehensive and managed to stay fresh till this new one came. How does this one, which looks gorgeous in pictures and interesting on paper fares? We find out! 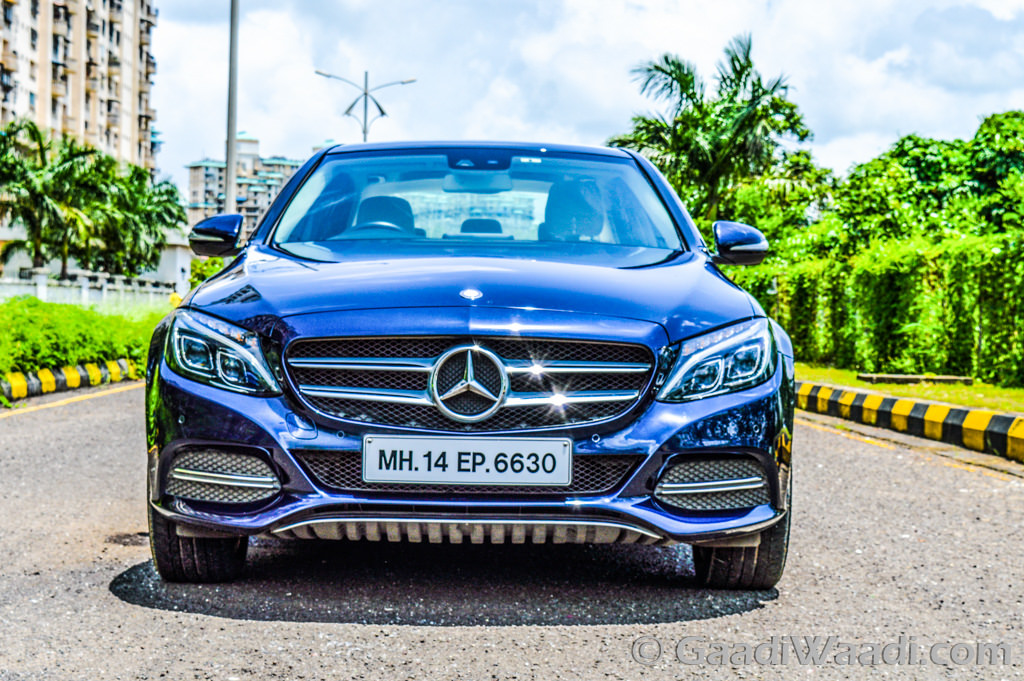 Without a doubt the 2015 Mercedes-Benz C-Class looks like a shrunken S-Class at first glance. Get closer and you see headlights and tail-light are inspired from the same too. Clean design language with two character lines on the side with large glass house give it a beefy stance. Curvy rear-end and sharp front-end surprisingly match well enough. Front-end is typical Mercedes due to twin slat chrome grill with the massive badge in between.

An interesting and artistic bumper along with dynamic headlight design make it stand a class above. A lot of chrome has been used all around the car to give it an upmarket look. Alloy wheels are good, but they look a wee bit dated now. Overall, slightly stubby at the rear, like any other rear-drive saloon in the segment, but a very proportionate stance indeed. 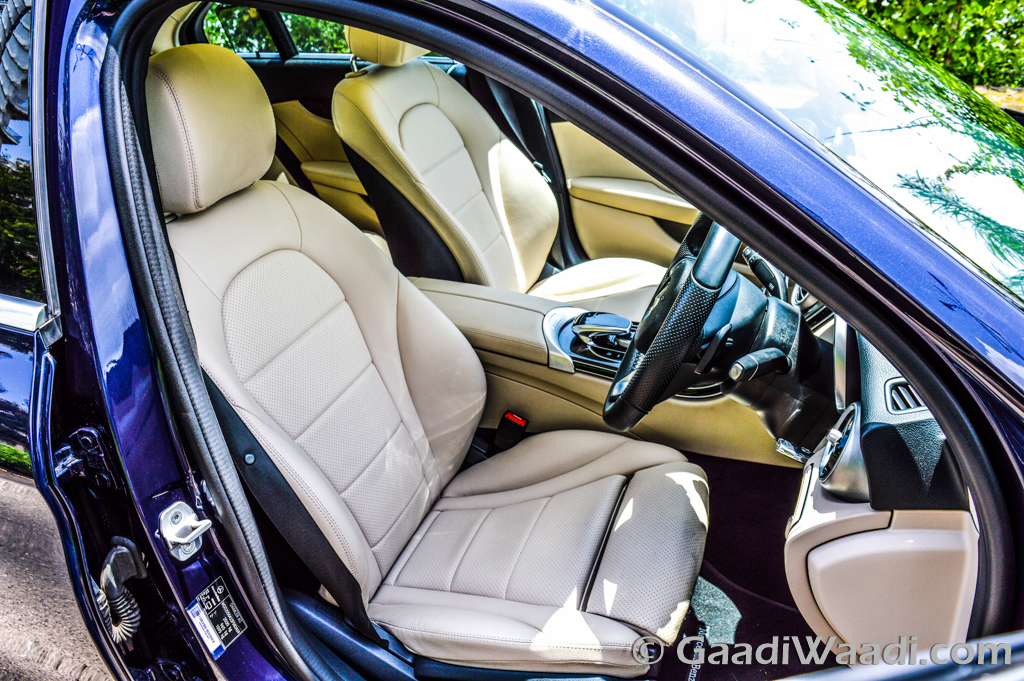 Step inside and the S-Class approach continues to stay here too. The layout is almost identical. The metal switches, the similar air vents and layout of COMMAND center controls and with swirl controller along with storage space in between is all very S-Class indeed. Gear lever frees space as its stalk rather than knob in the middle, typical Mercedes. Quality is top-notch as always and fit-finish levels are superb.

Visibility is really good all around. Plush feeling is here with the right mix of retro and modern, which Mercedes gets right every time, is here too. The perfect example for that would be the evergreen clock. Burmester speakers is another part of art which looks cool and sound fantastic too.

All of this possible is because of the combination of metalized switches along with the right use brushed aluminum and lacquered wood. The steering wheel though is a bit dated in design and there is the use of low quality plastic for the horn button. Space in the front is generous for all sizes of drivers and where the 2015 Mercedes-Benz C-Class scores is space at the back.

It has the ideal amount of knee, leg and head room. Shoulder room is good and since the C-Class is best for two persons due to the central tunnel in between, its more than enough. Seats at the front and back have great support. The A/c works really well and thanks to tinted glass (green in color) it goes undetected and yet does the job of keeping the cabin cool. Glass house is generous and thanks to a panoramic sunroof its a very airy cabin indeed. 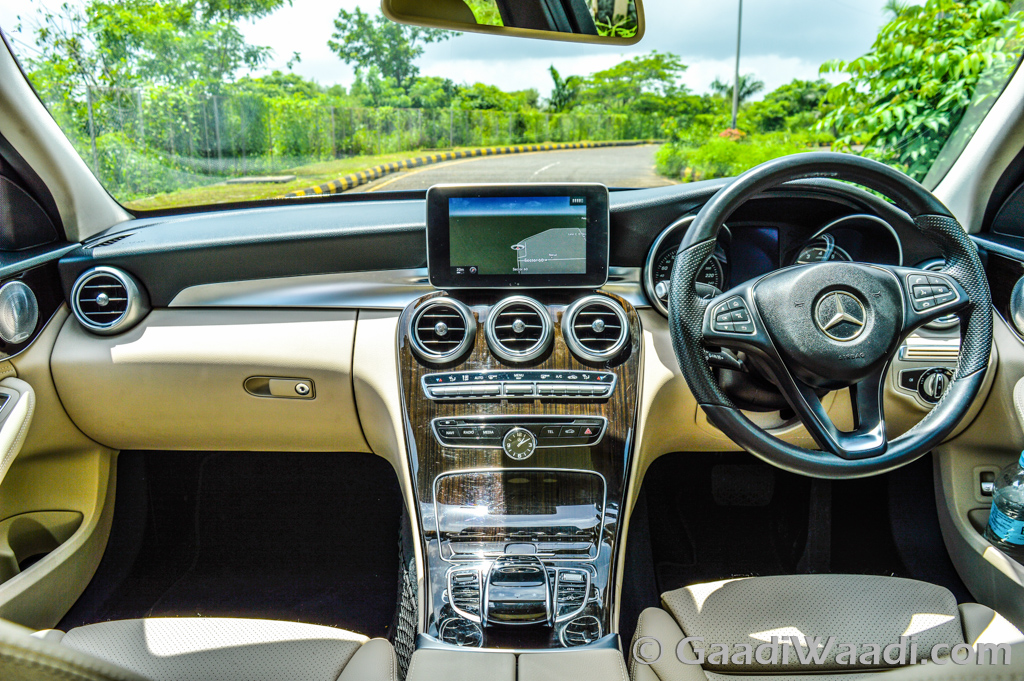 There is a healthy list of features in the C-Class, which includes a tablet inspired 17.78 cm central display screen. The usual bits such as Bluetooth, USB, AUX and iPod connectivity are available. Bluetooth of the car can read your messages, which is displayed on the screen and it does the same with your contacts too. 4-Way adjustable power seats, MID for fuel consumption, automatic lights and wipers, Garmin navigation system are available with the C-Class.

AGILITY CONTROL suspension with selective damping system, Drive mode, which adjust steering and engine performance also make it to the C-Class. Automatic climate control, keyless entry and much more are some of the many features are present in the C-Class. 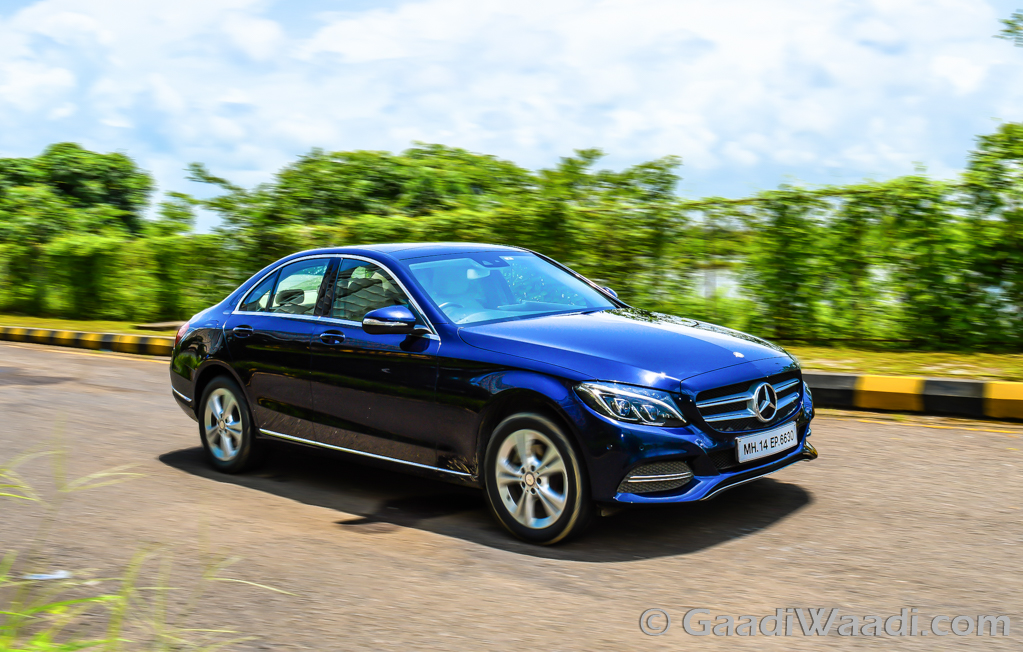 Our test car had a petrol engine onboard. The 1991cc engine inline four-cylinder engines makes 184 PS of power and 300 Nm of torque from its silky smooth four valves per cylinder unit. Top speed rated at 235 km/hr and 0-100 km/hr done in 7.3 seconds are impressive figures, but could have been better. Reaching 180/200 km/hr is an easy breezy task, but past that, it take some time. 200 BHP petrol engine should be standard, but then again, it wouldn’t be able to stunning fuel efficiency like this unit gives.

After stretching its leg on the expressway it was still delivering 8.1 km/l to the litre and the worst we saw was 7.3 km/l. Best fuel efficiency figure we saw was 11.2 km/l on the MID screen in the front. With a 66 litre fuel tank the range for a petrol car is impressive as it can deliver upto 600 kms and more in one single tank. All these performance and efficiency figures are thanks to a lot of time and effort spent in the wind tunnel with the new C-Class.

Mid range is very punchy with 300 Nm, something that is class leading. Gearbox isn’t segment best and isn’t spontaneous when the driver demands

Driveability is good in the city and it crawls well in traffic situations. If you want to close the gap in moving traffic, the gearbox drops a few cogs and surges you ahead. However, that takes a delay because the only downside to this powertrain is the gearbox. It’s OK in normal automatic mode, but be it manual mode through paddle shifter or sports mode, the changes take time, whether on up shift or downshift. The engine has some serious mid-range and top-end rush is enthusiastic enough. Redline comes at a very early 6500 RPM, but today’s turbocharger and reliability preferences counted in, it’s not of an issue, after all you have the AMG’s to delight your sense if your choice of fuel still is petrol. NVH levels are surreal of the C-Class, very little wind noise creeps in. Road and engine noise is almost no existent until you redline and last 500 RPM make a very angry micro AMG noise. 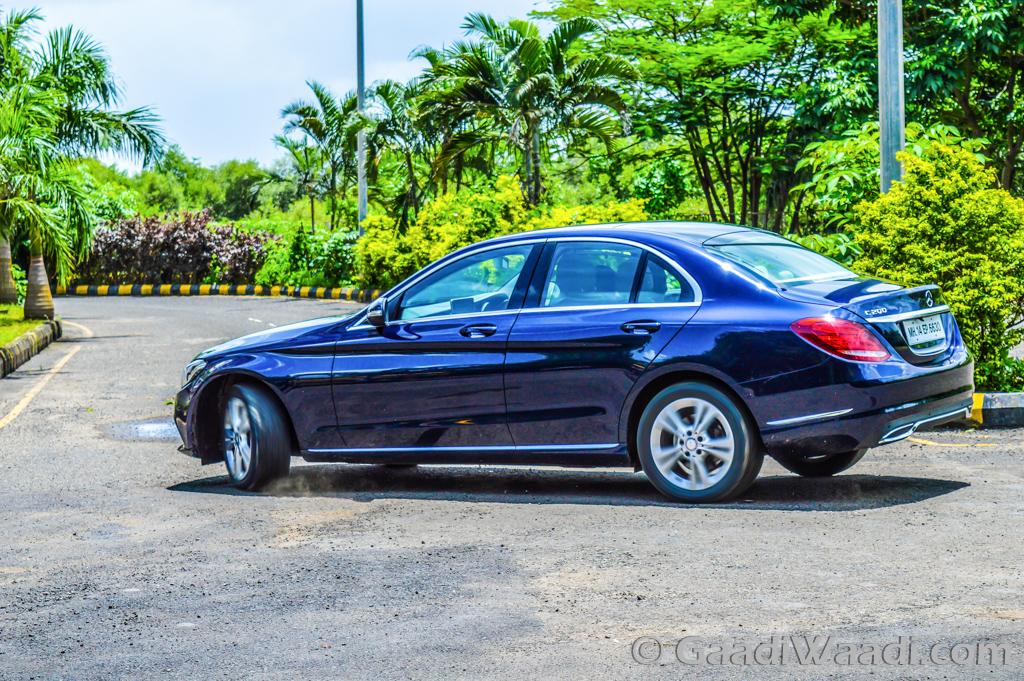 The weight savings are around 100 kgs mark than the earlier model, which should make things more agile and nimble. How does it drive? For starters, thanks to a tight steering rack, the car is easy to maneuver in city and taking 3-point turns for this 3-pointed star car is no problem.

Body roll is almost non-existent, grip levels are good and everything else is top-notch, but isn’t exactly fun to play around in the twisities like its competition

We had 17-inch wheels on our test car and we saw a noticeable improvement in body roll. The C-Class is poised through the corners, but it’s not engaging or fun to ride. High speed stability is top-notch and even at top-speed it remains rock solid. Turn-in is relatively quick, but the long wheelbase is noticeable. Thanks to that, stability and ride quality, both are good enough. The C-Class does not ride like old the Mercedes cars, which had the cushy-ness in their riding behavior, it does feel stiff and the intention to make it sporty isn’t right there yet. Braking performance is phenomenal with huge disc brakes all around along with host safety features such as ABS, EBD and ESP. Brake drying feature is also available, which means top-notch braking in wet conditions too. 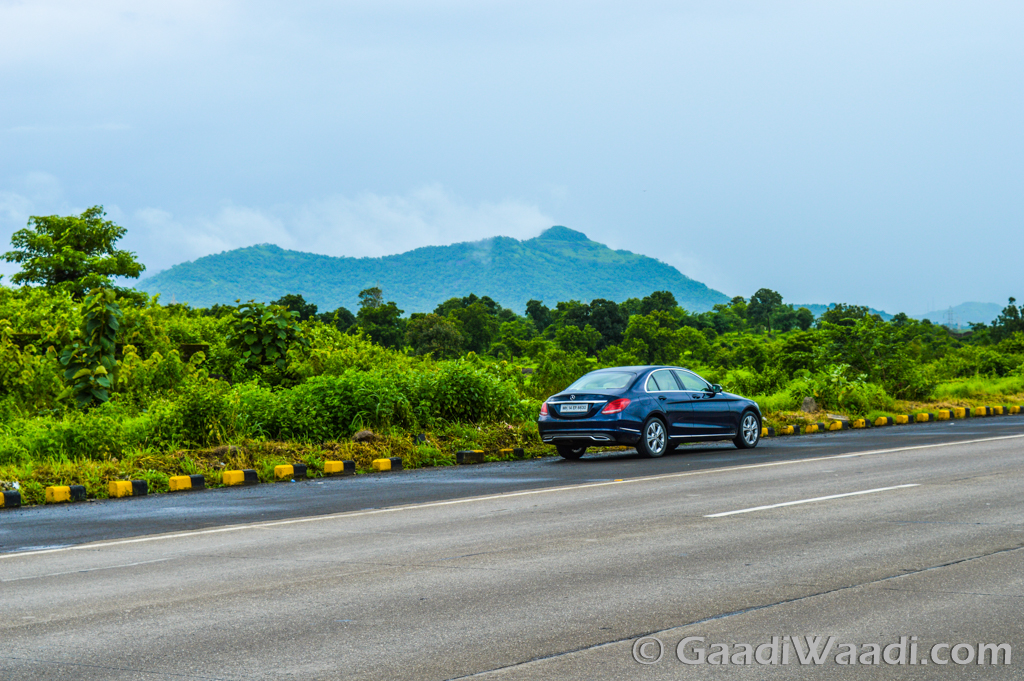 There is very little to say when we conclude our test for the 2015 Mercedes-Benz C-Class. The car has become the number one seller in the segment already worldwide and here in India. The best in class interiors and exteriors along with revised mechanical means its better than ever before. More space, more features and much more to offer.

Competition have taken notice and the upcoming models like the BMW 3-Series and Audi A4 have already been spotted in India and launch should happen before year 2016. As of now the new benchmark continues to rule and will give a very tough fight to its rivals for the number one place.