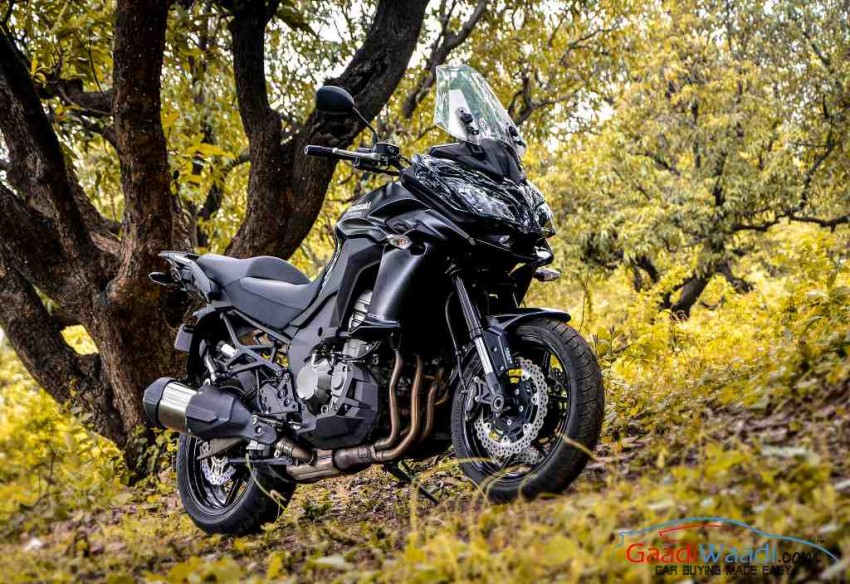 Kawasaki has been responsible in the country today to kick starting the premium motorcycle segment. When they launched the Ninja 250R, it started the urge small yet powerful quarter litre in the country with loads of horsepower on board. Sadly, the bike wasn’t priced right because of the multi cylinder layout, but the good news is that it still sold in good numbers and even till the moment it was replaced by its successor the fabulous Ninja 300. Post that Kawasaki went ahead and bought the Ninja 650 and then decided to go large.

Kawasaki opened up their own showroom in major cities like Pune, Bangalore, Chennai and now in Navi Mumbai. Meanwhile, the big news was that they started bringing in their flagship motorcycle like the ZX-14R and ZX-10R. Since then, all motorcycles have sold worldwide by Kawasaki started coming to India. Z1000, Ninja 100 and highly successful Z800. Very recently though, they launched another 1000cc motorcycle and that is the Kawasaki Versys 1000 LT. The Versys 1000 LT has the same engine as the Ninja 1000 the way chassis and other things have been done, it is said to be a touring motorcycle. How does it fare? We do over 400 kms to find out if the bike lives up to the adventure-touring nomenclature.

Large visor gives it ‘no doubt, i am touring motorcycle’ look

One look for the enthusiast and he can clearly say that Versys 1000 LT is an adventure motorcycle on the move. The tall stance, with dual headlight, half fairing and huge body panels all around like the luggage carrier at the rear and below there is long and bulky exhaust along with a skinny subframe that is holding that part. Long travel suspension at the front, along with four cylinders at show below at the front gives it big bike appeal. Something the non-enthusiast notice first. Large visor gives it ‘no doubt, i am touring motorcycle’ look. When you stare at it head-on, you find that the panels slopes below and there are a lot of cuts and creases for the air to pass. Meanwhile, it manages to look sharp and purposeful at the same time with those side shrouds and headlights that give great illumination and spread too.

Overall, a sharp-looking adventure-touring motorcycle and it should grab even more attention in the bright color as if the black color failed, which it didn’t. Fit-finish is good, but not excellent as Kawasaki’s should be as we could see semi-naked wires dangling around in the cockpit area. Paint quality is good all around ,but Kawasaki this time has chosen matt black on most parts while tank remains glossy.

Cluster is lifted from the Ninja 1000 and remains an old school unit with analogue tachometer and digital speedometer. As usual, you get your set of warning lights on the dash such as FI system and engine check light. Fonts on the tachometer and speedometer are old age and desperately need change. There are two buttons as always, which are mode and set for adjusting your trip meters and clocks.

Strangely, gear shift indicator is missing on the bike, but it gets the economy mode indicator like most bikes from the stable. Switchgear is also a standard Kawasaki affair. The right side has a mode button which set your traction control and lets you choose between low and high power mode. Hazard light button is also present.

As with any adventure biking, riding position and rider comfort is key with Kawasaki Versys as well. Seating position is upright and handlebars are set bang in between, not high, not low. Seats are humongous and the cushioning is fabulous for both rider and pillion. Our 300 kms ride on that day just went unnoticed in terms of stress on any body part. Footpegs are slightly forward and with enough leg room for taller rider, this is a great long distance touring machine. Even average height riders can enjoy with a wee bit of a stretch of legs at standstill.

The windscreen is also an adjustable unit and thanks to windblast is kept to a minimum even at silly triple digit speeds. You also have a large stand to store luggage and place to stick saddlebags as well at the rear. Overall, supremely comfortable for kind of commuting you ask for.

All of this isn’t bad news because Kawasaki has tuned to engine, mainly camshafts and valve timing to produce power and torque at lower RPM than its stable which share the same engine. The power band is much narrower than its siblings and power is developed in lower and mid-range of the power band. Top-end is adequate, but not intoxicating and it should be that way for a touring motorcycle.

Engine starts making presence as early as 3000 RPM and kicks you in the back of the head around 7000 RPM and then goes all the way to its 11000 RPM redline. Throttle response is perfect and intake howl sound it makes has been improved and definitely snarls out a jet-fighter sound exhaust note as well. Needless to say NVH and heat levels are fantastic, but there is a bit of buzzing near to the redline which is acceptable and should get better as our engine was new. 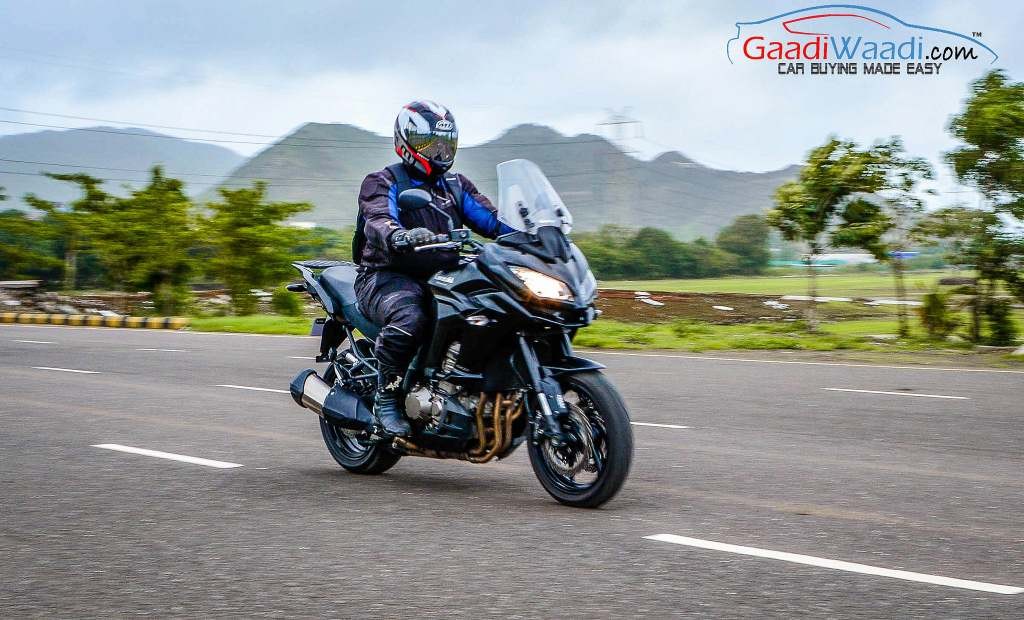 Choose between high and low power mode and engine note becomes even more raspier something not seen in Kawasaki bikes before. The high to low power does see the exhaust note change, but this time it’s certainly grabs your attention. Traction control helps you put the power down and stop wheelies from happening or what we found out is that it at least makes the wheelie angle to a minimum. Let’s not forget one thing, it’s stupid fast for our roads!

Reaching 200 Km/hr on high power mode is a joke and on low power mode, you can modulate throttle well in city and close gaps safely in city without scaring yourself silly. Accelerate on low power mode and reaching 170 km/hr is also a doodle. Engine is best at cruising around 140 km/hr and that means it can sustain those speeds all day long till you run out of fuel. Yes, of course fuel efficiency is what you want to know and it gave 14 km/l on the highway and we saw 16.7 km/l while riding normal on the trip computer.

Let’s deal with the city part first, as you will ride it from your home towards the twisty roads or highway. Riding in the city is a slight issue as it has wide handle bar and that does not allow much room to split lanes. Front-end is super light though, and changing lanes, when empty, is very easy. Engine too, supports low-speed riding, as it’s terrifically refined and makes low-end torque. Front-end infact is so light that is slightly scary at higher speeds and tipping it into the corner needs to be planned. The earlier it is the better with perfect throttle control. 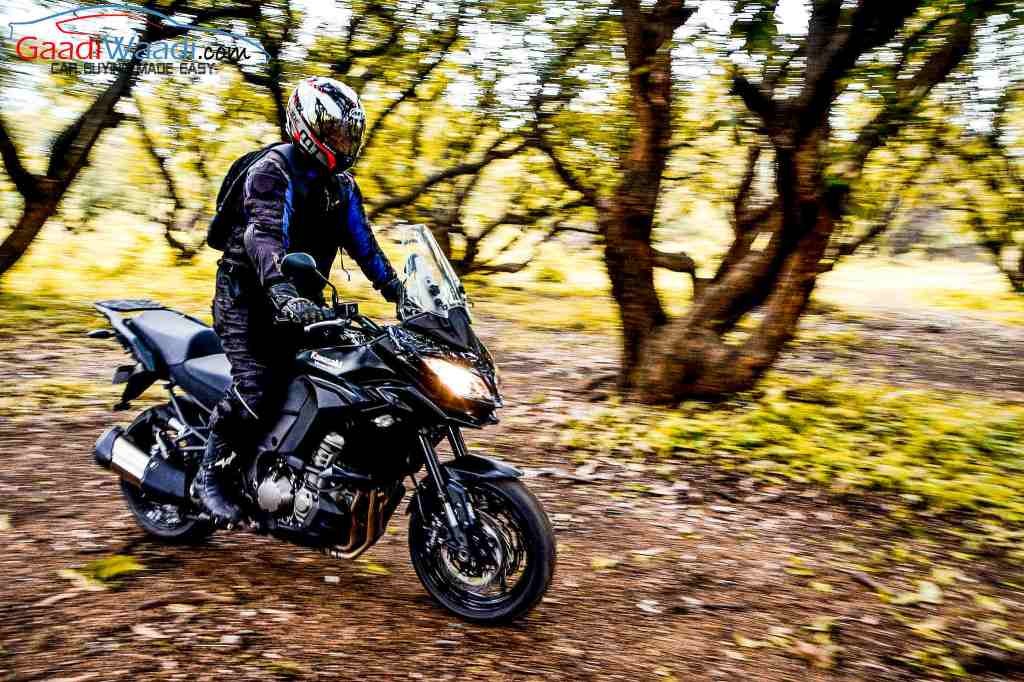 Suspension on both ends is adjustable and rear is only adjustable for preload while a cool remote adjuster .Grip from the tyres is good but could be better as we know these tyres are not super sticky but they are sticky enough to make confidence inspiring riding experience. In the corners, you do feel the weight only if you are not going fast enough. Brakes as always are not that great on initial bite, but post that, braking is progressive and powerful enough and thanks to ABS, no locking up of brakes either.

CLICK ON THE PHOTO ABOVE FOR HIGH RESOLUTION PICTURE GALLERY

The Kawasaki Versys is motorcycle that is made with purpose and succeeds at it, very well. It is easy to ride, comfortable, long distance touring motorcycle which can take tackle any kind of terrain. Given a large engine and equally large fuel tank it can take you absolute comfort wherever you want. Sure, if your height falls below 5’11 it will be a struggle for you but when tides turn, its one the best bikes for tall riders, as it gives enough freedom to roam around and carry on for journey’s.

Refined engine, light-front end and enough grunt on board to smoke sports car and can do a bit of offroad and all of that coming at a fraction of a cost, it already makes it more value than the sticker price it carries. We think this is the best bike for our roads but as manufactures say, terms and conditions apply. 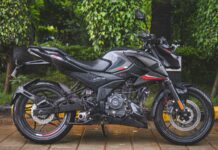 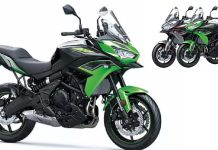 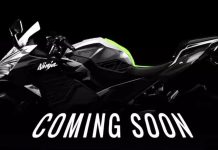 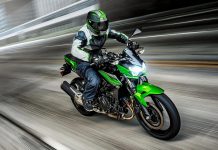 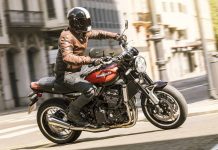