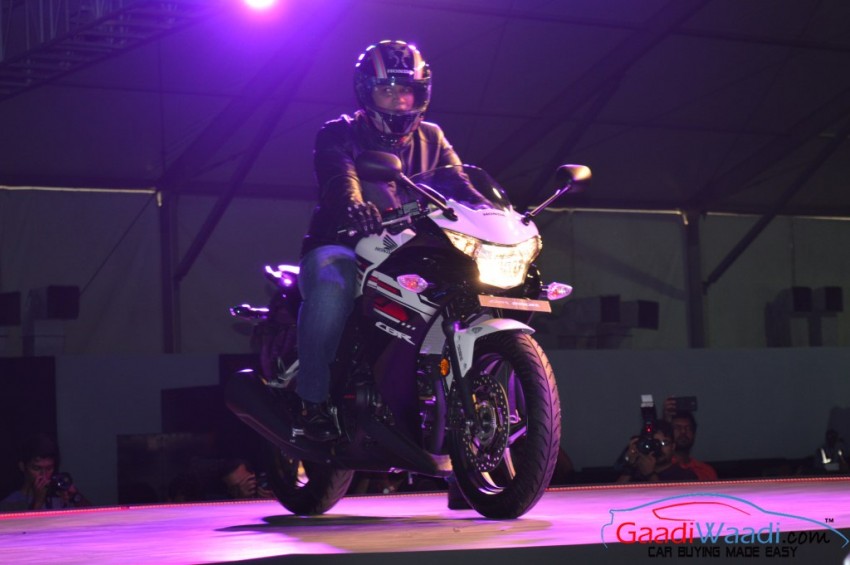 Honda has launched the Honda CBR 250R in the country today at the REVFEST carnival that seems to be the biggest event for any motorcycle event ever done. Honda continues to be aggressive with its motorcycle launching strategy in the country. Since scooters are done and dusted with normal launches it was time of the segment where Honda is almost non-existent. The premium motorcycle category, which is between 150cc and above has been favorable for the brand. Today, with all the noise it can make it has launched four premium motorcycles and one of them is the Honda CBR 250R. The Honda CBR 250R pricing remains the same. Honda CBR 250R continues to have the same design language, which means the single shaped headlamp from the VFR is there. The Fireblade design and 300cc mill has been ditched for India as of now and is postponed for a further date, which is yet to be announced. The bike has all black theme in the lower part of the bike, which includes, wheels, exhaust canister, chassis and suspension. The new black and white does good look, but it would have been awesome on the Fireblade design even more. The black and golden bike wasn’t available at the event, but it will be ready for the consumers. Wheels remind us that new tyres from MRF are seen and the horrid Continental tyres, which lasted ages, but were poor on grip and enthusiastic riding. A feedback taken seriously by Honda after years after its launch. Mechanically, the Honda CBR 250R continues to produce 26 BHP of power and 22.9 Nm of torque from its liquid-cooled and fuel-injected 249cc motor. The weight, fuel tank capacity and other figures are identical, which means its a touring friendly bike for the masses. The bike offers decent fuel efficiency with a lot of comfort for rider and pillion. Engine is tried and tested and remains bulletproof. The bike had quality issues in the first year and today it should be a niggle free as Honda has eradicated quality issues. We wish the 300R came and since it hasn’t we wish that it comes sooner!