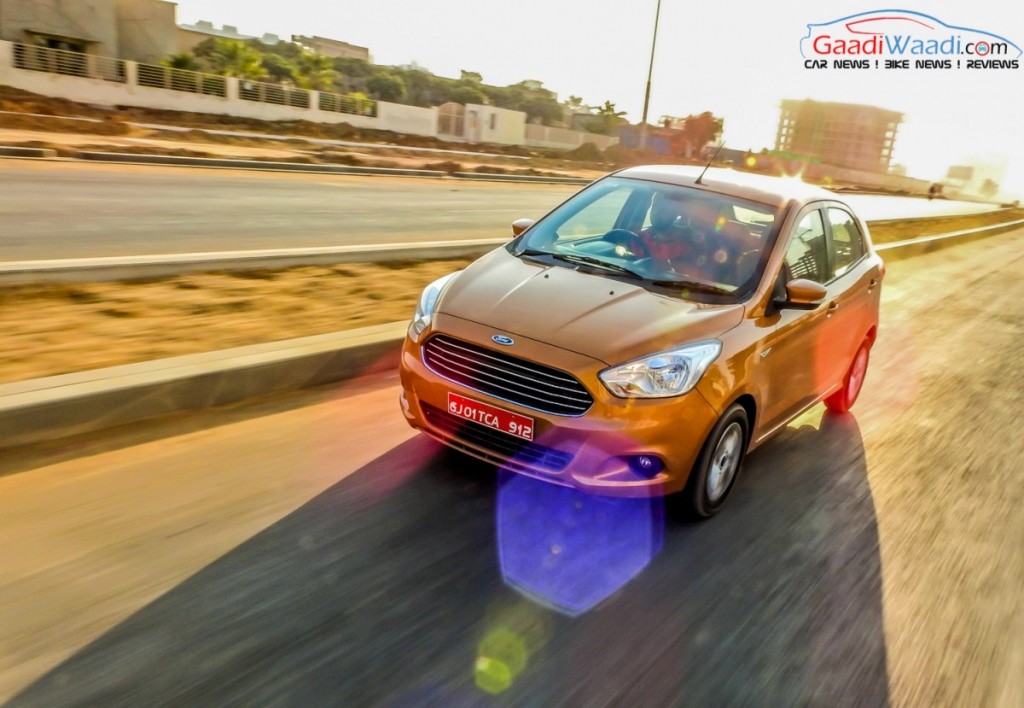 Ford returned to the Indian market in 1995 through a joint venture agreement with Mahindra and Mahindra before increasing its stakes in the company to 72% three years later and renaming the firm from Mahindra Ford India Limited (MFIL) to Ford India Private Limited. Since its revival, there’s been several successful products and of them, Ford Figo hatchback is largely considered to hold the silverware and brought the American manufacturer back in the volume sales frame.

The first-generation subcompact hatchback was launched in March 2010 and it was manufactured at the brand’s dedicated base in Chennai. In its five years reign in the market, it underwent a major facelift last year in September and we got a chance to test drive the top-end diesel version. Will it live up to all the expectations notched upon it? Read on to know more: 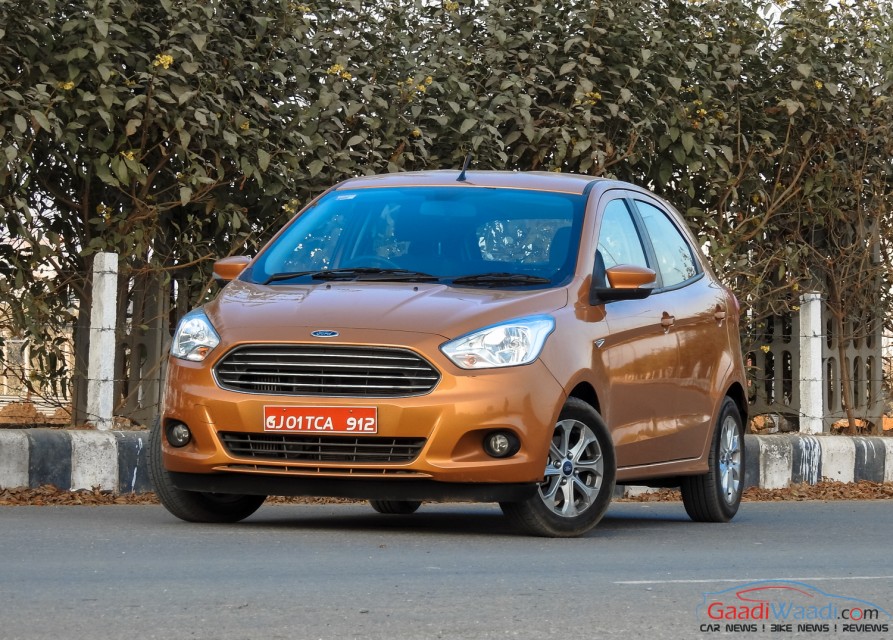 The B-segment hatchback stands in line with the One Ford philosophy that has been followed globally. Its designed has heavily been influenced by the Figo Aspire sedan as both models have identical appearance except for their body styles. The new generation Figo has a front fascia dominated by the now-common hexagonal grille that will look similar to the design of Aston Martin models. 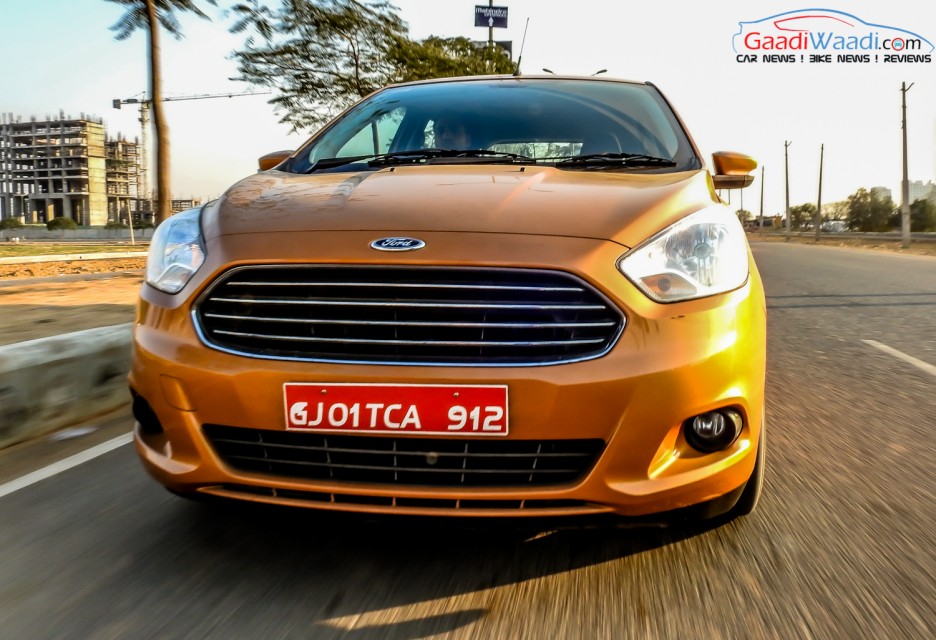 The four horizontal chrome slats liven up its premium appeal and the head lamps are swept back to project the nose further forwards. The newly designed body-coloured bumper, air dams and round-shaped fog lamps with new enclosures enhance the overall appearance. 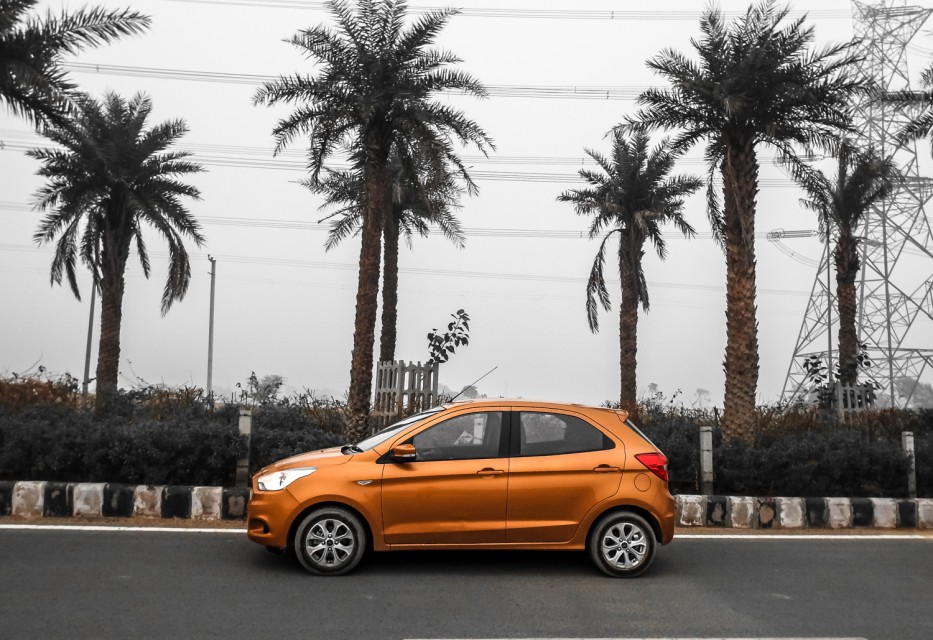 The roofline is tapered and the strong shoulder line on the side profile makes it a well-proportioned hatchback and let alone the neatly styled 14-inch alloy wheels. The rear looks rather subdued with the horizontally stacked chrome-lined large tail lights that are wrapped around. The entire aesthetic package ensures premium stance and has proven to be the best in the segment. 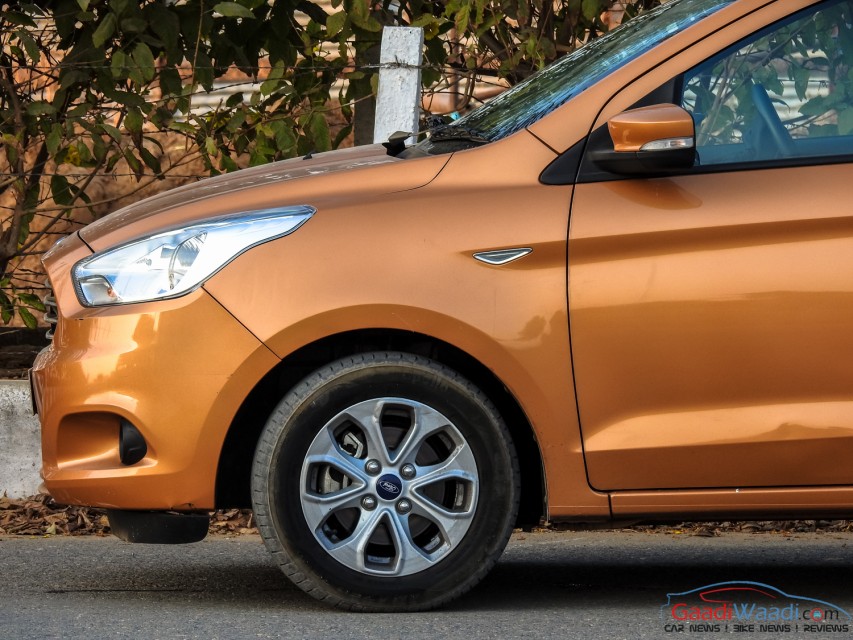 The new Ford Figo sits lower and is as wide as main rival Swift with the width of 1,695 mm. However, the wheelbase of 2,491 mm makes the Ford 61 mm longer than the benchmark Swift hatchback. It translates to additional cabin room while the space at the boot is generous as well with 257 litres.

The ground clearance is as well class-leading as the 174 mm distance from ground to the car is by a whisker more than the Swift. The wheelbase is similar to the Aspire and hence it offers one of the most spacious cabin in its segment.

There are 20 unique storage spaces on the inside of the Ford Figo hatchback. Since it’s based on its larger sibling, the Ford Figo Aspire, the component, features and design sharing inside the cabin can be clearly visualised. However, the 2015 Figo comes only with mono colour tone instead of the Aspire’s dual tone Black-beige scheme.

It comes equipped with all-black colour scheme with silver inserts for the centre console, storage compartment, dashboard, door trim and steering wheel to eradicate the dullness and inject a premium cabin feel. The instrument cluster has a neatly laid out three-pod design with analogue gauges and small multi-info display to avail necessary details. However, its plastic quality could have been better. 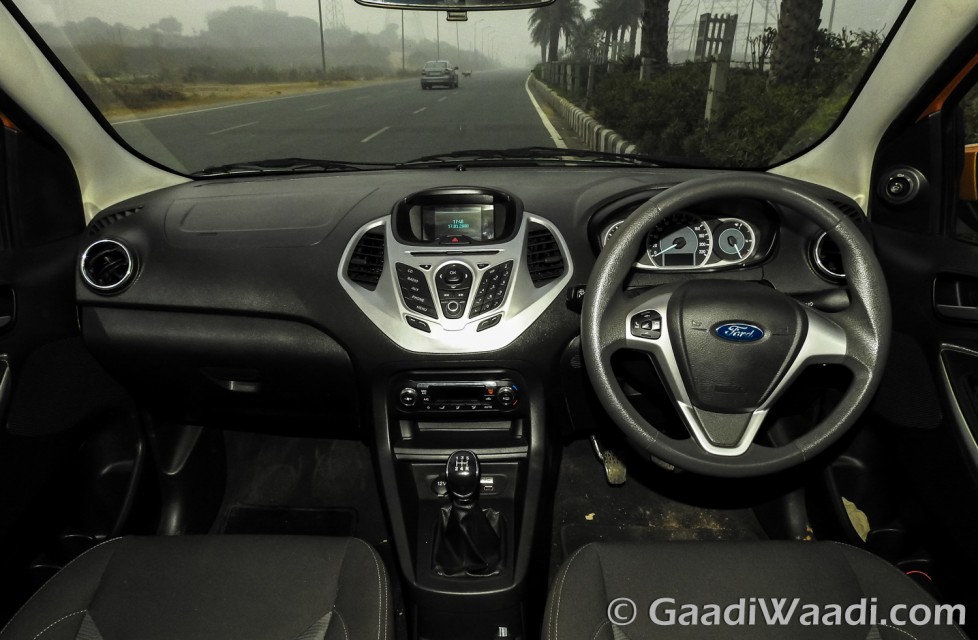 The multi-functional three-spoke steering wheel has mounted controls for call, voice commands and music system. The range-topping Titanium+ Diesel we have tested had the segment-first driver, passenger and four other airbags along with engine immobiliser, ABS and EBD for improved safety quotient. 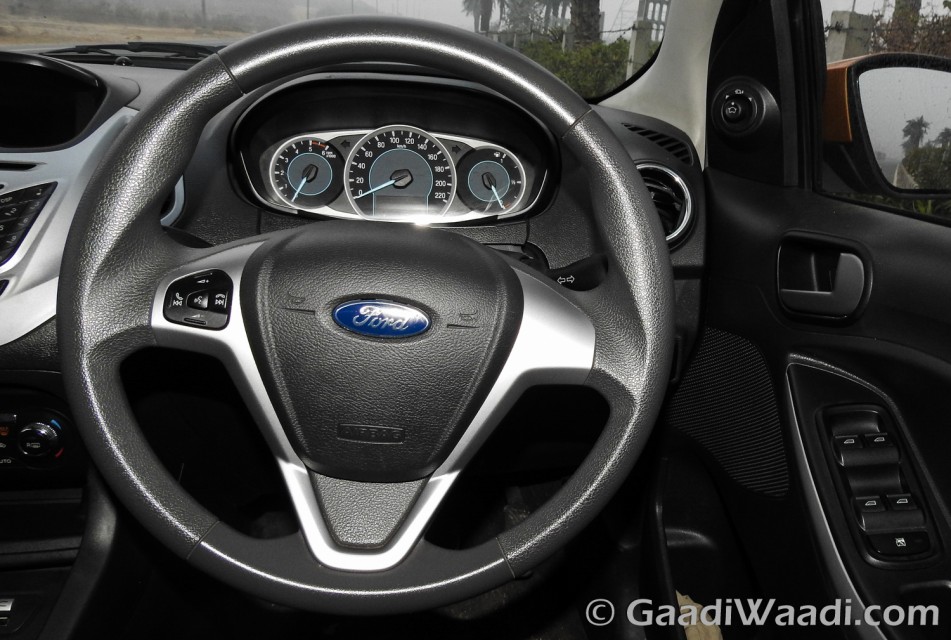 The equipment highlights in the top-end trim include the MyFord Dock, first appeared on the Figo Aspire. It allows passengers to place and charge their devices with ease and can be used for navigation when necessary with the advantage of integrated in-car entertainment.

Ford’s SYNC with AppLink connectivity is another halo feature and the the Ford MyKey is an keen safety technology that helps owners in setting limits on top-speed, regulating volumes on-the-fly, encouraging seat belt usage and so on. The 2 DIN integrated music system has digital display with four speakers and AM/FM, CD, AUX, MP3 Playback and Bluetooth connectivity. 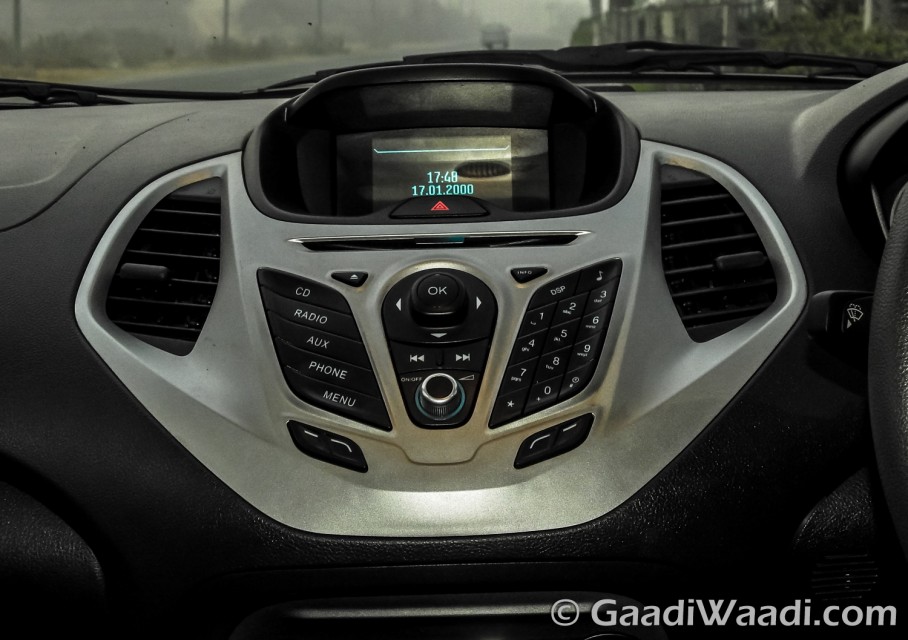 The comfort and convenience features include the most powerful AC in its segment with automatic climate control system, headlight off and ignition key off reminder, anti-glare mirrors and vanity mirrors on sun visors. The seat upholstery is made of fabric and the driver seat can be manually height adjusted as per the requirement. The rear seats can be fully folded and the body-coloured ORVMs can be electrically adjustable with integrated turn signals. 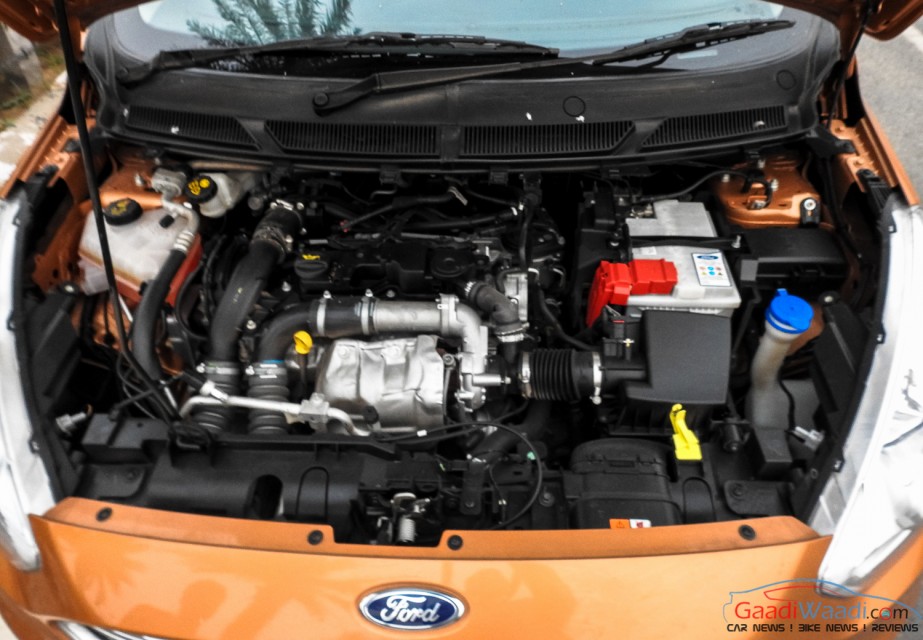 The Ford Figo we have reviewed had a 1.5-litre in-line four cylinder DOHC turbocharged diesel engine under the bonnet. It’s a 100 PS power house with 215 Nm of torque. It’s the most powerful unit in its entire segment and comes mated with five-speed manual transmission whilst being able to deliver an ARAI certified class-leading fuel economy of 25.83 km per litre. 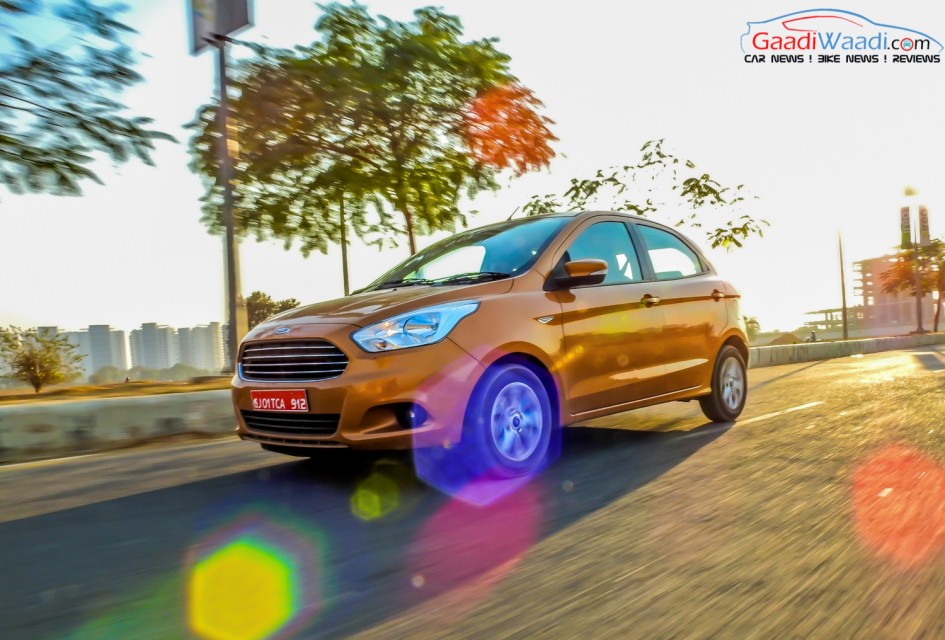 The 1.5-litre DOHC turbocharged diesel engine that produce 100PS at 3,750 rpm and 215 Nm torque at 1,750 RPM is the USP of this facelift which is 50% more than first-gen 68 PS Figo. This motor allow you to enjoy every single second of your drive, either you are driving it in city or on highway. The 2015 Ford Figo diesel is very responsive from first to top most fifth gear but however its gear shifting could have been better. 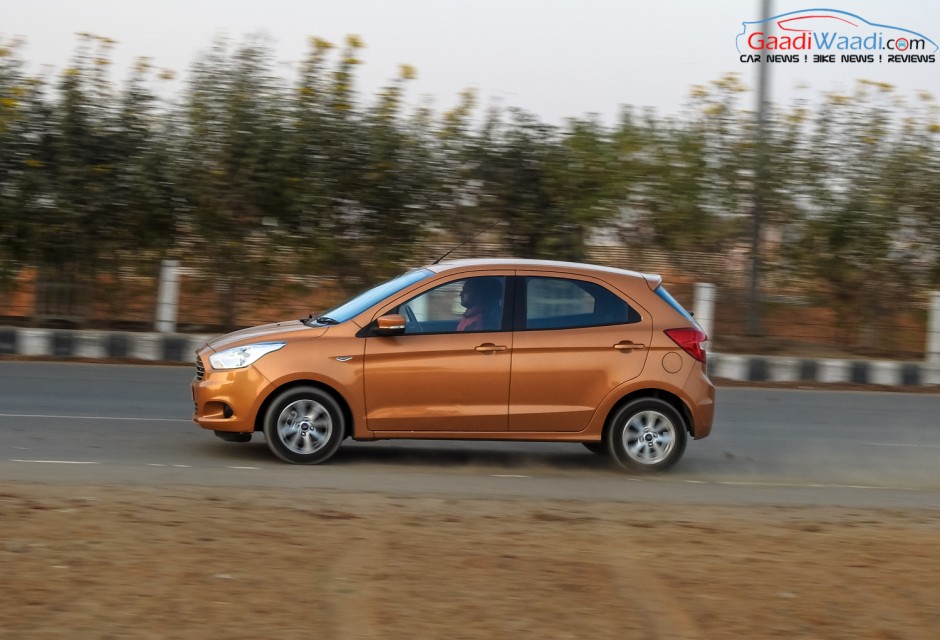 Its mid-range is responsive too which allows you to overtake very easily. The motor remains silent upto 3800-4200 rpm only while you can rev it until 5000 rpm. We touched 145 km/h top speed without any extra effort but we missed the stability for what Ford Figo was known for but still the new-gen Figo is more stable than most of its rivals. 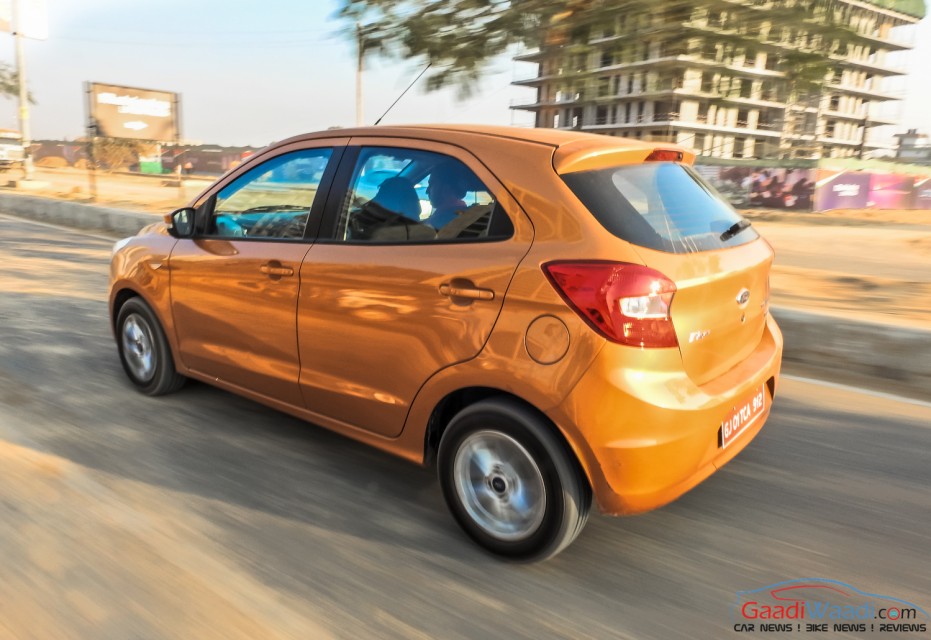 We drove the 2015 Ford Figo around 450+ km and it delivered an overall fuel economy of 18.6 kmpl – a very good mileage after being aggressively driven by me for 500+ km drive inside the city and on highways.

The Ford Figo has traditionally been going up against the segment-leading Maruti Suzuki Swift and Hyundai Grand i10 along with the Honda Brio and Tata Bolt. Since launched, the Ford Figo hatchback has garnered good response and the 2015 Figo diesel with its class-leading safety features, class-leading powerful engine with best fuel economy and a good automatic gearbox has certainly won our hearts. Along with that, the 2015 Ford Figo is one of the best looking hatchback with plenty of features on offer except for the reverse parking sensor. 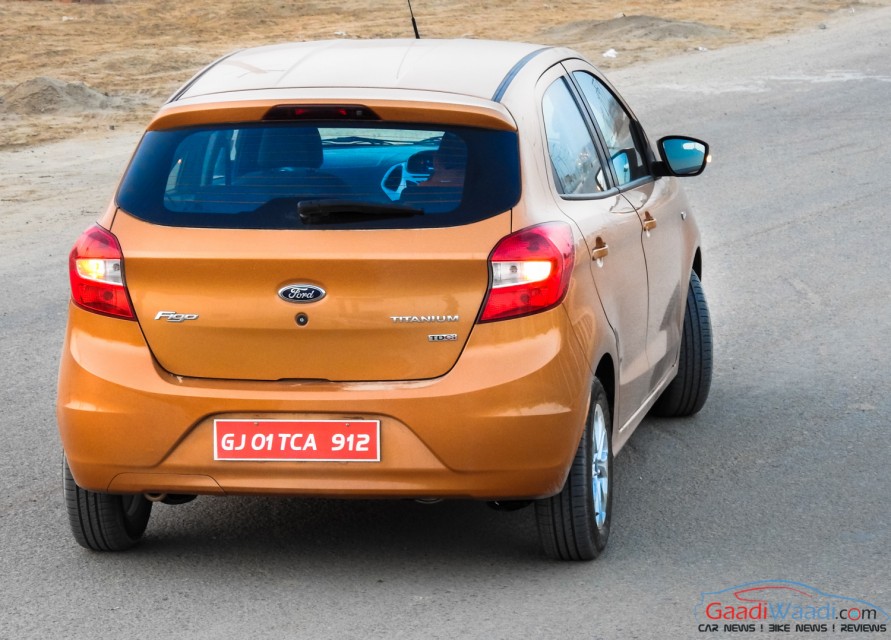 Overall, 2015 Ford Figo diesel is a practical, spacious and comfortable hatchback with powerful motor and Ford’s promises of low after sales service cost and spare cost will be the USP of this product along with the unmatched price of the complete package.

If you are planning to buy a hatchback, don’t forget to test drive this mini powerhouse.