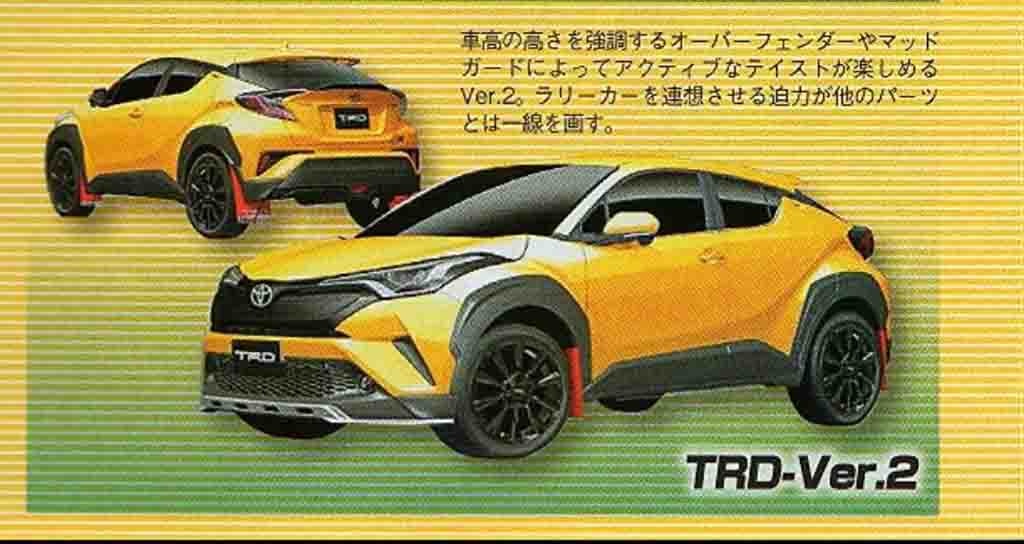 Toyota C-HR is gearing up for its public showcasing at the upcoming 2016 Paris Motor Show. Meanwhile the sportier version of the car the C-HR TRD Edition has been previewed in Japan through the leaked brochure images. The car is expected to launch in Japan sometime later this year. The TRD Edition comes with aggressive body kits giving the C-HR an even sportier appearance. Alongside the exterior, the interior of the Toyota C-HR TRD Edition gets revised appearance. The interior is available in two different colour themes – Licroice Brown and Black. It features new seat upholstery, while the centre console has been revised as well. Also to add more zing to the cabin, the car gets sporty aluminum pedals and illuminated sill plates, which adorn TRD badge.

The Japanese auto manufacturer showcased the C-HR in its concept form at the 2016 Geneva Motor Show earlier this year. Now the production variant is ready to be showcased at the upcoming 2016 Paris Motor Show. The car comes with a sharp and sporty design, and recently in Australia, Toyota revealed the colour options for the car. On the powertrain front, the Toyota C-HR is equipped with three different engine options. These are a 116 PS producing 1.2-liter turbocharged petrol unit, a 150 PS generating 2.0-liter petrol unit. There is a 1.8-litre petrol hybrid variant as well, which kicks out 98 PS from the petrol motor and 72 PS from the electric unit. On the transmission front the Toyota C-HR gets 6-speed manual transmission and a CVT as well.