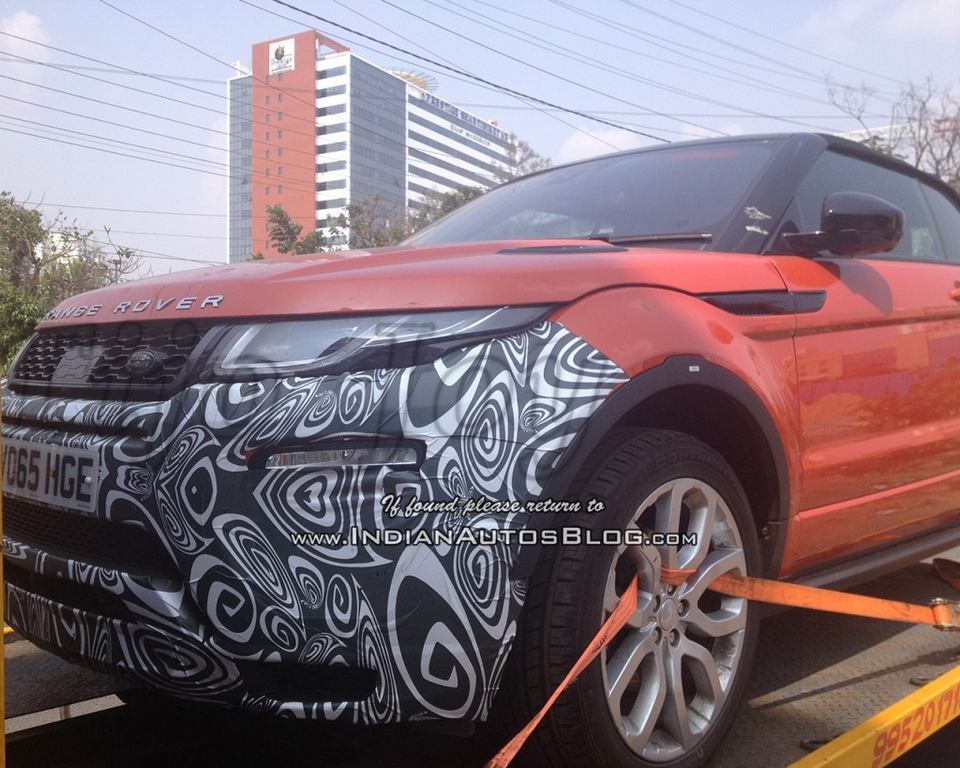 The test mule of the forthcoming Range Rover Evoque Convertible has been caught testing in India for the very first time. Courtesy of IAB, the luxury soft-top was spied being lifted on a flatbed truck and bore a number plate registered in the UK. Said to be the ‘world’s first luxury convertible SUV’, it is expected to be launched in the second half of 2016 and will arrive in India through CBU channel.

The Range Rover Evoque Convertible made its world premiere at the 2015 Los Angeles Auto Show and will be sold in the middle parts of 2016 in the foreign markets. Retailed under two trims namely SE Dynamic and HSE Dynamic, the Indian market is believed to receive only the latter spec with a single engine option. It will be a luring addition to the current range of JLR’s luxury portfolio and it could become a volume prospect for the Tata-owned British luxury brand. The soft-top convertible is in the flesh a facelifted sporty Range Rover Evoque crossover – launched last November in India – without a hard roof. As ever, bodywork modifications were implemented to compensate for the loss of metal alongside the addition of a slick rear spoiler.

The impressive bit of automatic Z-folding meant that the lighter, five-layer, fabric top can be brought down in fold in just 18 seconds and it erects back up in 21 seconds. The action can be performed at speeds of up to 48 kmph while moving. In case of a rollover, the occupants will be protected by “survival space” and the Range Rover Evoque Convertible extracts power from a 2.0-litre Si4 240hp turbocharged, four-cylinder motor coupled with a nine-speed ZF automatic gearbox with full-time all-wheel drive system.

It could also be equipped with the existing 2.0-litre Ingenium diesel engines tuned to develop power in the range between 150hp and 180hp at a later time. The 237 hp and 340 Nm producing 2.0-litre turbo can do 0-100 kmph in just 8.6 seconds. It can sprint away to a top speed of 209 kmph which not far off the pace of standard Evoque crossover.

The Land Rover InControl Touch Pro infotainment system with 10.2-inch touch-screen will be offered as standard. What will be more appealing to the affluent Indian customers are the captivating looks and the removal of the roof allowing 250 litres of extra bootspace as the stock Evoque comes with only 549 litres in comparison.
Source: IndianAutosBlog