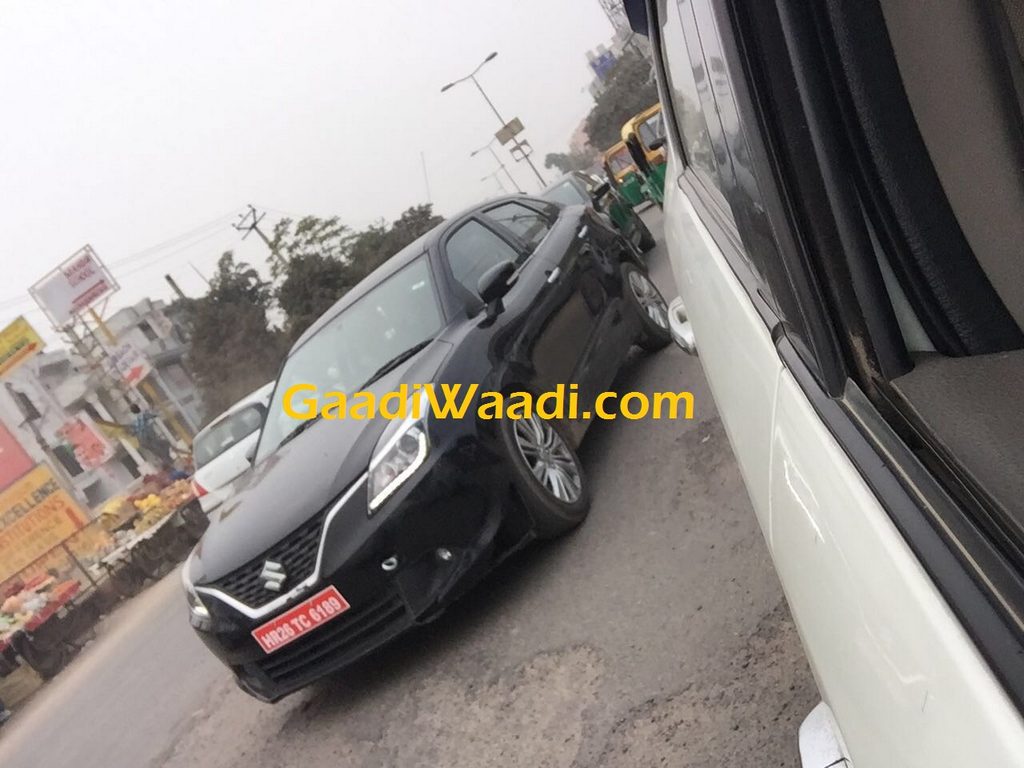 The spotted test mule of the Baleno premium hatchback in Cochin earlier proved that Maruti Suzuki is eyeing to drop in a more powerful version of the headline-grabbing model that has already bettered main rival Hyundai i20 in November and December months’ sales.

Expected to grace the Indian scenes halfway through or in the later parts of 2016, the pictures of Baleno caught testing sported a black paintjob that is not among the current seven colour offerings for the model in the market. The high performance is dished out from the 1.0-litre three cylinder Boosterjet turbocharged petrol engine capable of delivering 110bhp and 170Nm of torque. Recently spotted by our reader, the rear of the hot-hatch Baleno sporting a Suzuki badge indicated that it could be an export model. More significantly, the spy images reveal that the Baleno is set to have rear disc brakes as well. The 1.0-litre Boosterjet engine equipped Baleno could wear a RS badge when introduced in India and will depend on the RS concept to be revealed at the Auto Expo 2016 with modifications to the front and rear bumpers amid incorporating sportier seats. Powering the recently launched Baleno is a 1.2-litre VVT four-cylinder engine generating 84.3 PS of maximum power and 115 Nm of peak torque mated to a five-speed manual transmission. The petrol unit claims to deliver 21.4 kmpl fuel efficiency and there is also a CVT gearbox on offer which is ARAI-certified to return a mileage of 21.4 kmpl as similar to the standard manual variants. The more powerful Baleno Boosterjet will compete against the Volkswagen Polo GT TSI which comes with a seven-speed automatic and has a 1.2-litre TSI petrol engine with 103bhp power and 175Nm torque. The VW is priced at Rs. 8.58 lakh(ex-showroom, Delhi) and returns 16.47 km/l.

The hot hatch derived from Punto Evo, the Abarth Punto, will also make for a strong competition as, despite featuring a five-speed manual gearbox only, the potent 1.4-litre T-jet turbo petrol engine develops a mouth-watering 140bhp and 200Nm of torque. Its mileage is raced at an impressive 16.3kmpl whilst being retailed for Rs. 9.95 lakh (ex-showroom, Delhi) – exactly what the top-end regular model costs. Thus we expect the 1.0-litre Boosterjet turbo petrol-equipped Baleno to be priced in the middle of both VW Polo GT TSI and the Fiat Abarth Punto with a CVT gearbox and added fuel economy whilst the five-speed manual can’t be ruled out of the equation. Back in December, the spied test mule also seemed to be an export model and had safety features like disc brakes on all four wheels, side airbags, TPMS (Tyre Pressure Monitoring System) and radar-based brake support.

With similar interiors, body panels and doors as the Indian-spec Baleno, the spotted hatchback was shod on with attractive alloy wheels and is expected to have a near 100kg weight penalty due to the arrival of the 1.0-litre Boosterjet engine. Suzuki debuted the all-new Turbo Boosterjet petrol mill on the India-bound Vitara crossover for the UK market earlier this month. It’s the first application of the new family of fuel-efficient engines with a new wastegate technology from the Japanese car maker.

The technology works in such a way that the wastegate valve closes during heavy pumping of the throttle to increase turbocharger’s boost pressure. For reducing pumping losses, the valve stays open at normal running and thus allows for ‘power boost’ whilst fuel economy is enhanced comparatively. The re-worked turbo with 1.1 bar boost pressure is connected directly to the cylinder head and the exhaust manifold is fitted on the cylinder head costing. This quirky design will minimise the irksome turbo lag.