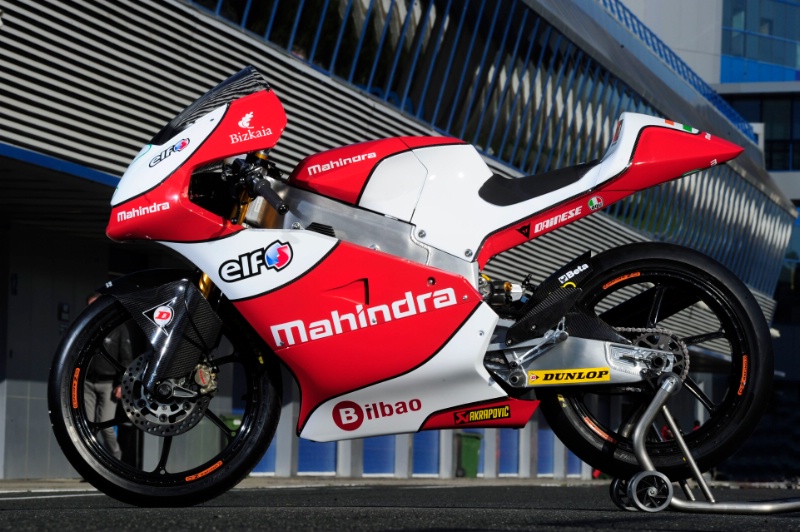 Mahindra Racing clinches podium in the Moto3 season opener at Qatar; Francesco Bagnaia took second podium and fifth for the Indian constructor since returning in 2014

The 2016 MotoGP season kicked off in style last night under the floodlights at Qatar and Aspar Mahindra had the perfect start to the campaign by clinching a podium in the Moto3 World Championship category.

Credits to the Aspar Mahindra rider Francesco Bagnaia, who is only on his second year with the team, has drove his heart out to stand on the final step of the podium in a nail-biter of a race. The eight-way battle to the chequered flag saw the 19-year-old Italian fighting for honours with the best riders on the planet in the 250 cc Moto3 championship.

Moreover, the inspiring fact is that the revised Mahindra’s MGP30 bike Bagnaia saddled on was just 0.148 second adrift of the race winner Niccolo Antonelli from Honda and the second-place finisher KTM’s Brad Binder – the South African was a former race winner with Mahindra twice in 2014 riding for a customer outfit.

Francesco “Pecco” Bagnaia is a protégé of the VR 46 rider’s academy and he qualified for the Qatar Grand Prix from the fourth row. Bearing in mind that Qatar is the first of the 18 rounds scheduled for 2016, it carried all the more significance to bag as much points as possible.

On the 5.38 km long Losail circuit, Bagnaia had a good getaway and moved up to seventh position by the end of lap one. It was all hustle and bustle from there on as the riders tussled for championship points in the ever-competitive Moto3 field with close wheel-to-wheel battles assured from the leading pack to the tail-end.

The Italian found himself in the middle of an eight-way battle as momentum swung between riders from one corner to the other. The one kilometre long pit straight allowed for slip-streaming and some brave late braking into Turn 1. With the Mahindra MGP30 being a super handling bike, Bagnaia found himself overtaking through the corners but was left to play catch-up sometimes on the straight.

The racing was so close that only three quarters of a second separated the top seven riders in the end and Bagnaia with his intelligent riding skills managed to taste the champagne much to the delight of his Aspar Mahindra squad. He dropped back to sixth in the 18 lap race but moved up the order when KTM’s Romano Fenati went wide into Turn 1 and held the course.

It was the debut the team had hoped for as the white-liveried, all-new, Mahindra MGP30 proved its technical brilliance and all the painstaking work went into designing and bringing the Moto3 machine on par with the competition during winter testing. The Aspar (run by four times world champion Jorge Martnez) and Mahindra partnership has paid dividends as the team opted to go with a new bodywork – allowed once during the entire season – during the practice which gave better lap times.

Mahindra’s Moto3 chief Mufaddal Choonia said earlier that the aim of the team is to win at least one race in 2016 against the Honda and KTM rivals. Having achieved a podium already in the opening race with the redesigned bike housing a new engine and aero package, we don’t see it far from coming!